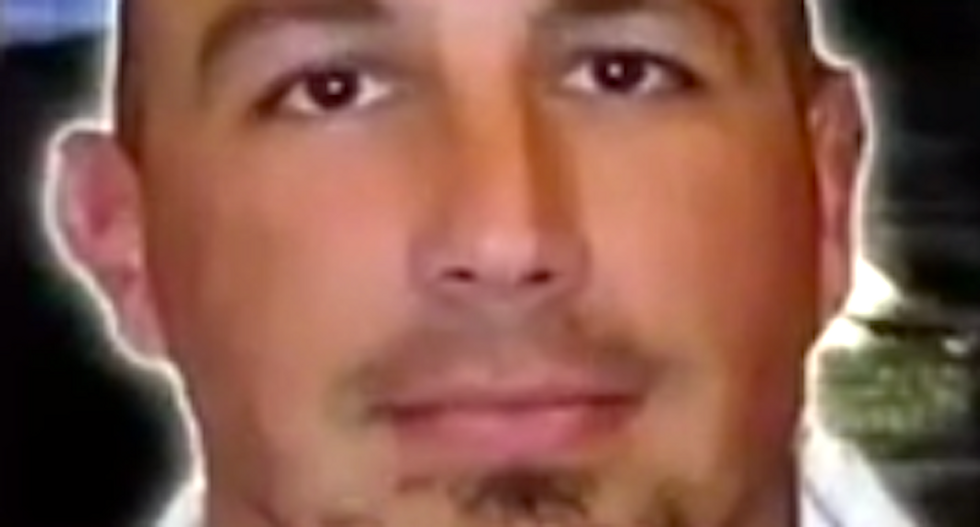 In March, Albuquerque police shot and killed a homeless man who had been illegally camping in an incident that was caught on tape and led to a storm of controversy over the decision to open fire.

Now, months later, a newly released video reveals that Officer Keith Sandy had, two hours earlier, talked about shooting 38-year-old James Boyd in the penis and dismissively referred to him as a 'lunatic.'

Friends said the mentally ill Boyd had decided to camp out in the foothills above the city after homeless shelters had closed, and police negotiated with him for about five hours before fatally shooting him in the back.

Video from the incident recorded by an officer’s helmet camera shows Boyd arguing with police but then picking up his belongings to leave.

But then an officer fires a flash-bang grenade, which disorients Boyd, and then he appears to grab a knife as police dogs approach him.

Boyd takes a step toward police, who open fire on him.

KOB-TV reported that Sandy was captured speaking dismissively about Boyd on another officer’s dashboard camera after he responded to the man’s campsite.

Sandy was unaware the camera was recording his conversation with state police Officer Chris Ware, who said Boyd had asked for state troopers.

“For this f*cking lunatic?” Sandy says on the recording. “I'm going to shoot him in the penis with a shotgun here in a second.”

Ware asks Sandy if he has a less-lethal weapon, and the officer tells the trooper he has a Taser shotgun.

“Oh, I thought you guys got rid of those,” Ware says.

Sandy told the trooper that the department’s specialized Repeat Offender Project still used the Taser shotgun, but he admitted he wasn’t sure of the details because he had not been briefed.

An attorney for Byrd’s family said Sandy’s comments revealed his intention to shoot the homeless man.

“Two hours later he's escalating the situation so he can do just that,” civil rights attorney Shannon Kennedy told KOB. “It's chilling evidence and stunning that he has not been criminally indicted. He says to a state police officer ‘that f'ing lunatic, I'm going to shoot him in the penis.’ It's crystal clear, and he says it with contempt in his voice.”

Sandy was questioned about the comments in April during an internal affairs investigation.

"Jokingly, just kind of locker room banter, just told him, you know, ‘Don’t worry, I’ll shoot him in the pecker with this and call it good,’” Sandy told investigators from Albuquerque police.

But a transcript from the interview shows Sandy denied making the comment just minutes later.

The station reported that Sandy later explained that officers in the ROP unit often made crude and cruel jokes during their duties.

“Of course, it’s not a joke because he went forward and actually shot him,” Kennedy said.

Sandy remains on administrative leave but is permitted to carry his gun and badge.