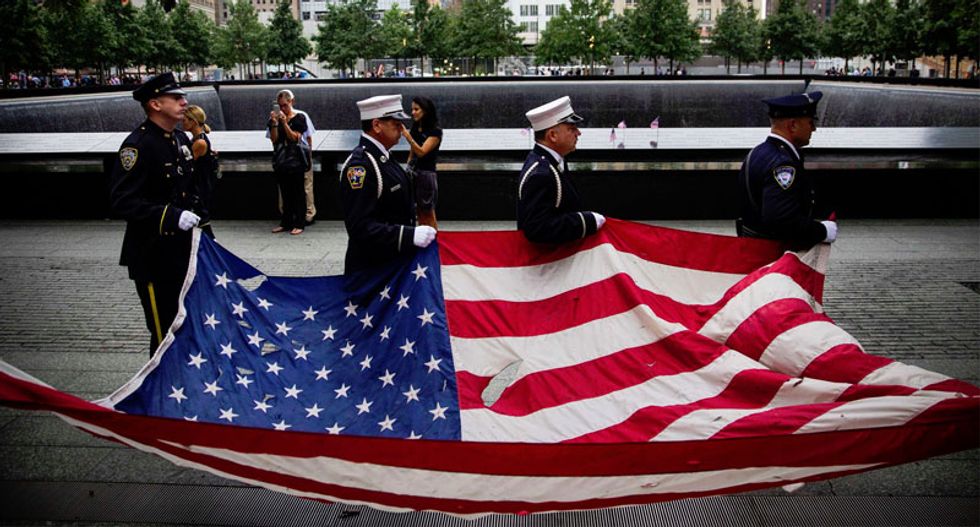 Members of the New York Police Department, Fire Department of New York and Port Authority Police Department carry an American flag at the beginning of the memorial observances held at the site of the World Trade Center in New York, September 11, 2014. (REUTERS/Andrew Burton/POOL)

Politicians, dignitaries and victims' relatives gathered in New York City, at the Pentagon and in rural Pennsylvania on Thursday to remember the nearly 3,000 people killed in al Qaeda's attack on the United States 13 years ago on Sept. 11.

In what has become an annual ritual, relatives began slowly reciting the names of the victims at a ceremony in lower Manhattan, from Gordon Aamoth, Jr., to Igor Zukelman.

Readers would occasionally pause as a silver bell was rung to herald moments of silence marking the times when each of the four planes hijacked by Islamist militants crashed and the World Trade Center's twin towers fell.

President Barack Obama spoke at the Pentagon during a private ceremony for relatives of the 184 people killed in the attack on the headquarters of the U.S. Defense Department outside Washington in Arlington, Virginia.

He laid a wreath of white lilies and mums, and kept his hand on his heart as "Taps" played.

"Thirteen years after small, hateful minds conspired to break us, America stands tall and America stands proud," Obama said, telling the victims' relatives their love was "the ultimate rebuke to the hatred of those who attacked us that bright, blue morning."

In New York, the voice of Tom Monahan, a man with salt-and-pepper hair and broad shoulders, cracked when he talked about the brother and cousin he lost in the attack.

"Everything is fine until you get here," he said before waving his hands as if to signal he could not talk anymore.

He headed through security checkpoints to join a crowd that stood beneath an overcast sky in the memorial plaza at the heart of the new World Trade Center, which is nearing completion. Some in attendance were dressed in military uniform, others in T-shirts and sneakers.

Many people held up posters with smiling photographs of their dead relatives. Red roses and American flags poked up from the bronze plates bearing victims' names that ring the two waterfalls that now trace the footprints of the fallen towers.

New York Governor Andrew Cuomo was among the mourners, as was New York City Mayor Bill de Blasio, who was joined by two of his predecessors, Michael Bloomberg and Rudy Giuliani.

The high fences blocking off public access to most of the World Trade Center site finally came down in May. While lower Manhattan may look and feel different this year, the threat to the United States represented by the Sept. 11 attacks remains. Washington and its allies see Islamic State, a group that began as an offshoot of al Qaeda, as an increasing danger.

On Wednesday, Obama said he had ordered an aerial bombing campaign targeting the group, which has seized large parts of Iraq and Syria and released videos of beheadings of two American journalists.

The only ceremony open to the public was at the Flight 93 National Memorial in Shanksville, Pennsylvania, where one of the four hijacked airliners crashed.