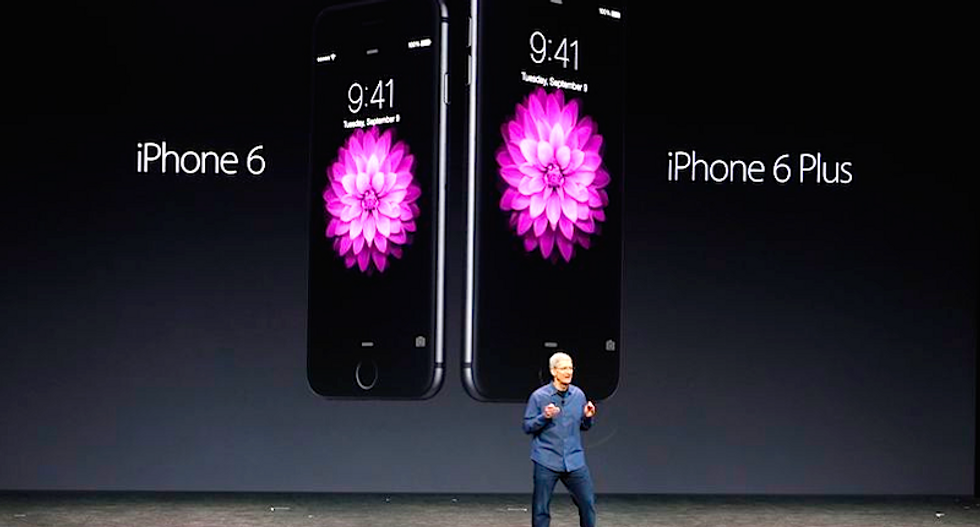 Apple CEO Tim Cook introduces the new iPhone 6 and iPhone 6 Plus (R) during an Apple event at the Flint Center in Cupertino, California, September 9, 2014. (REUTERS/Stephen Lam)

Bigger is better and Apple Inc has finally realized that and given iPhone users a product that may be low on novelty but high on improvements, reviewers wrote.

Most reviewers say that the iPhone 6 is the best smartphone available or "ever made," while the 5.5-inch iPhone 6 Plus has been described as a "phablet" that will give competition to Samsung Electronics Co Ltd's Galaxy S line of 'big' Android phones.

"I think it's a terrific phone. In my view, it's the best smartphone on the market, when you combine its hardware, all-new operating system, and the Apple ecosystem whose doors it opens," Walt Mossberg wrote of the 4.7-inch iPhone 6 in the tech blog Re/code.

Geoffrey Fowler, who reviewed the phones for the Wall Street Journal, said Apple has "successfully addressed its size deficiency."

Mossberg said the increase in the screen size is a "catch-up" feature. But it is seen as a welcome change by Fowler, who said the iPhone "felt stuck in a bygone era called 2012" before the launch of the bigger phones.

New York Times reviewer Molly Wood appreciated the new "thinner, flatter and more rounded shapes" of both the phones. But she pointed out that the sleek look comes at the cost of the phones feeling "slippery."

The improvements made to the operating system -- the iOS 8 software, and that to the camera were given a thumbs up by reviewers across the board. However, most believed that Apple could have done more to enhance the battery life of the phones.

Joshua Topolski, who reviewed the phones for Bloomberg, said they were faster than their predecessors.

"Apple will tell you that these are the fastest mobile devices it's ever made, and it wouldn't be lying. These phones scream," Topolski wrote.

The new iPhone 6 goes on sale on Sept. 19 in the United States.

(Reporting by Arnab Sen in Bangalore; Editing by Gopakumar Warrier)