Ruth Bader Ginsburg: If Roe v. Wade repealed, only the rich will have access to abortions 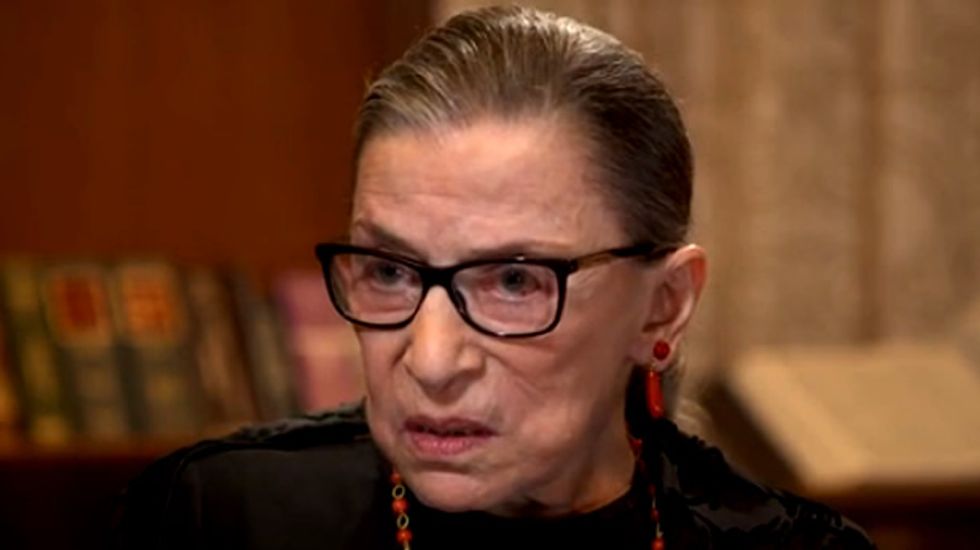 In a wide-ranging interview with The New Republic's Jeffrey Rosen, Ruth Bader Ginsburg addressed her new role as the public critic of the Supreme Court's conservative majority.

The interview began with her addressing liberal complaints that she should have retired before the midterm elections, so President Barack Obama could be assured of having a new nominee confirmed.

"First," she said, "I am fantastically lucky that I am in a system without a compulsory retirement age. Most countries of the world have age 65, 70, 75, and many of our states do as well. As long as I can do the job full steam, I will stay here."

Moreover, she said she would ask those liberals who thought she should have retired a simple question: "'Who do you think the president could nominate and get through the current Senate that you would rather see on the Court than me?' No one has given me an answer to that question."

When Rosen asked her what the worst ruling the current Court has produced was, she replied, "if there was one decision I would overrule, it would be Citizens United. I think the notion that we have all the democracy that money can buy strays so far from what our democracy is supposed to be."

But Ginsburg also noted her disappointment in the disemboweling of the Voting Rights Act in Shelby County, saying that "that act had a voluminous legislative history. The bill extending the Voting Rights Act was passed overwhelmingly by both houses, Republicans and Democrats -- everyone was on board. The Court’s interference with that decision of the political branches seemed to me out of order. The Court should have respected the legislative judgment."

She also expressed concern for what would happen if the Court overturned Roe v. Wade. "It would be bad for non-affluent women," Ginsburg said. "If we imagine the worst-case scenario, with Roe v. Wade overruled, there would remain many states that would not go back to the way it once was. What that means is any woman who has the wherewithal to travel, to take a plane, to take a train to a state that provides access to abortion, that woman will never have a problem."

"Women who can't pay are the only women would be affected," Ginsburg said.

"The irony and tragedy," she added, "is any woman of means can have a safe abortion somewhere in the United States. But women lacking the wherewithal to travel can’t. There is no big constituency out there concerned about access restrictions on poor women."

She said that the only way to ensure that poor women had equal access to abortion clinics would be to create a human-rights advocacy coalition of the sort she worked for in the 1970s -- an empowered American Civil Liberties Union.

"Think of the Pregnancy Discrimination Act," she said. "The Court had said discrimination on the basis of pregnancy was not discrimination on the basis of sex, and a coalition was organized to get that law passed. The ACLU was the central player, but everyone was on board. The same thing happened after the Lilly Ledbetter case. It would take a similar kind of coalition. It must start with the people. Legislatures are not going to move without that kind of propulsion."

As for her new-found popularity as "The Notorious R.B.G.," Ginsburg said that "at my advanced age -- I'm now an octogenarian -- I'm constantly amazed at the number of people who want to take my picture." But, she added, she does enjoy seeing people in t-shirts that read "WHAT WOULD RUTH BADER GINSBURG DO?" and "YOU CAN'T SPELL TRUTH WITHOUT 'RUTH.'"