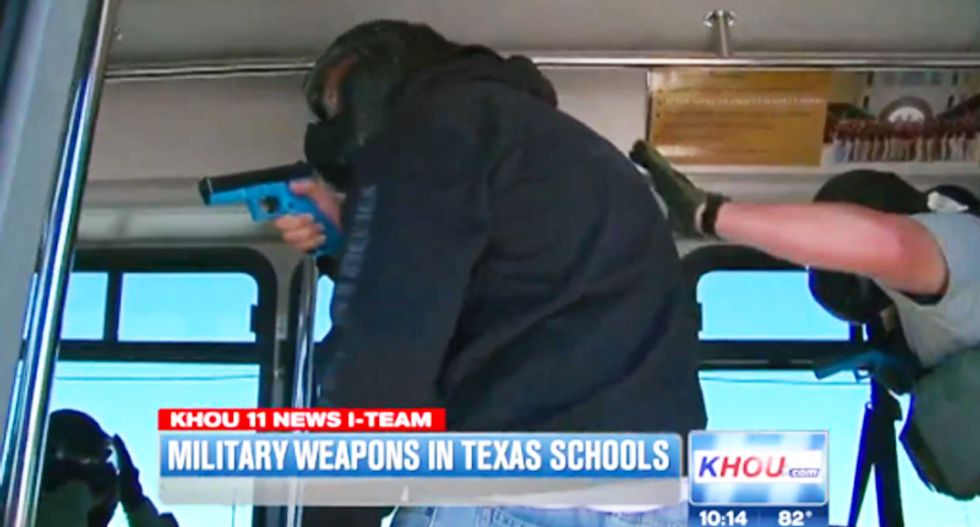 A KHOU investigation shows that ten school districts in Texas have been acquiring the military surplus under a government program that allows them to load up at little to no cost.

According to the investigation, the districts have acquired 64 M-16 rifles, 18 M-14 rifles, 25 automatic pistols, extended magazines, and 4,500 rounds of ammunition. Additionally, the schools stocked up on armored plating, tactical vests, as well as 15 surplus military vehicles.

In the wake of the over-the-top military-like response by police in Ferguson to protestors, not everyone is thrilled by the idea of campus police outfitted like SWAT teams.

"We don't necessarily believe that this kind of equipment leads to students feeling more secure and safe in schools," said Brennan Griffin of Texas Appleseed, which has been studying police on campus policies for years.

"We've seen how even much less-lethal devices like Tasers and pepper spray get used inappropriately and end up harming children," he told the KHOU.

Following the Columbine and Sandy Hook school massacres, school districts have increasingly been supplying officers with more weaponry they feel is needed based upon the possibility of an active-shooter on school grounds.

According to Spring Hills school district Police Chief Charles Brawner, the rifles are only available to tactically-trained officers in an emergency and, when not in use for training, they are locked up in the department's armory.

Pointing out that studies show that most shooting scenarios last approximately 12 minutes, Griffin said, "It's hard to see how an officer would be able to gain access to the armory, bring it to the school, assess the situation and somehow use that weapon in the time that a school shooting usually occurs."

Watch the KHOU video report below: