The grim story of the Snowy Mountains' cannibal horses 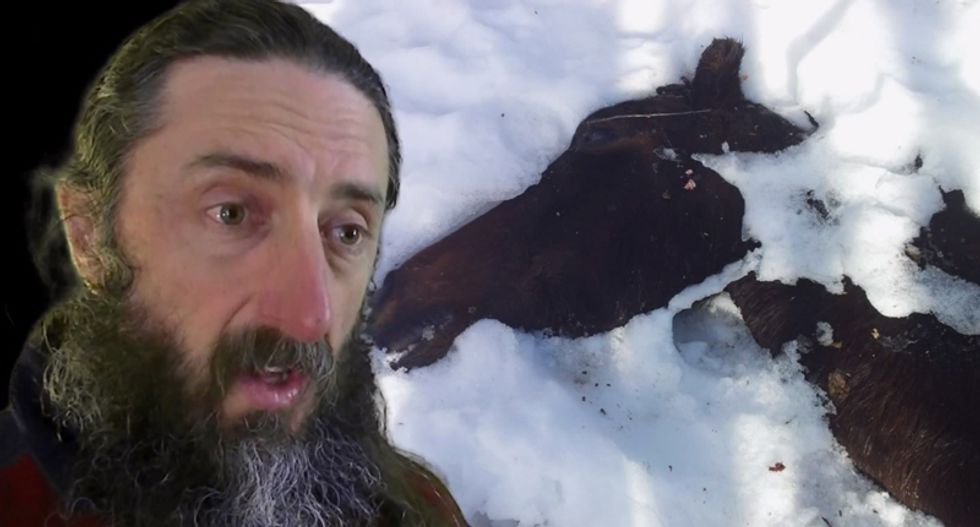 When you think of horses in the Australia high country, you might imagine noble brumbies galloping out from snowgums across grassy peaks, tails and manes trailing like streamers.

But on a recent trip to the Snowy Mountains in Kosciuszko National Park we made a grim discovery about these denizens of the Australian psyche.

At Dead Horse Gap we encountered three brumbies standing calmly in the snow among the curly tree trunks. The brumbies did not flee as we quietly approached for a close encounter.

The first inkling we had that all was not well was our observation that these animals were emaciated, with ribs and bony hips protruding, skin sagging.

A few steps closer and we could see a fourth horse lying dead on the ground. Two of the horses had their snouts inside its gaping abdominal cavity, nibbling at what little remained of its digestive tract.

As far as we are aware, this behaviour has never been documented before. The noble brumbies of the silver screen have been reduced to starving cannibals in Kosciuszko National Park. What has gone wrong?

Fateful decision to not shoot horses

In 2008, the Kosciuszko National Park Horse Management Community Steering Group made a fateful decision. After carefully considering the range of options for managing horses, the committee decided against a strategy of culling by aerial shooting, choosing instead to trap horses using lures and mustering. This was despite aerial shooting being cost-effective, humane, safe, and the only feasible method in inaccessible areas.

The consequences of this management choice are not just starving horses forced to scavenge the digestive tracts of their fallen comrades. There are well-established environmental impacts of feral horses in natural environments.

There are substantial knowledge gaps regarding horse impacts on the natural environment. A recent Hot Topic released by the Ecological Society of Australia notes there are no peer reviewed papers examining horse impacts on native species in Australia. No one has measured the effects of horses on the mammals or other animals of Kosciuszko National Park. Nevertheless, the evidence available already, from Australia and overseas, is enough to demonstrate that large numbers of feral horses are not compatible with the natural values of national parks or wilderness areas.

A major wilderness area, the Pilot Wilderness in the southern part of Kosciuszko Noational Park, has some of the worst horse damage imaginable.

On a recent cycle trip into the Pilot Wildnerness, the smell of horse dung never left us. Instead of fresh mountain air, we were accompanied by a smell more commonly associated with horse stables. Riding along the fire trail, we dodged mountains of dung, and small groups of horses, for kilometre after kilometre. Stopping for rests along the grassy flats, we experienced first-hand the caved-in river banks, the flourishing weeds, the close-cropped grasses, and more dung heaps than you’d expect to see lying around after question time at Parliament house.

Trampling, horse trails and grazing damage was widespread and not just confined to flats and roadsides.

For the first time in the evolutionary history of the Australian alpine ecosystems, horses appeared to be the dominant ecological process across the entire landscape. We weren’t visiting a wilderness. As ecologists, it appeared as though we were visiting a land under siege.

How many horses suffer?

Gathering the latest data on horse numbers and demographics, we made some simple calculations to model the fate of horses over ten years.

Horses suffer in a variety of ways in the wild, with on average, 20% dying of starvation, poisoning, or dehydration each year. When trapped, 30% are re-homed to private properties in NSW; the rest are sent to abattoirs.

Estimates vary on how many horses are actually in the park now, but this uncertainty makes little difference to the relative outcomes for horses. Taking the low estimates, our calculations suggest between 7000 and 11000 horses will die from starvation, poisoning or dehydration over a ten year period if aerial culling is not included in management plans.

If horse numbers are at the high end of recent estimates, the number that die in ways that we saw at Dead Horse Gap in Kosciuszko National Park could be as high as 20,000. In contrast, with aerial culling, only one quarter of this number would suffer and die on the mountain.

Whatever the initial population, deaths from starvation, poisoning and dehydration are likely to be 2-5 times higher if aerial culling isn’t included in management.

From an animal ethics point of view, aerial culling spares thousands of horses from unsavoury deaths on the mountain due to starvation, thirst or poisoning, and spares hundreds to thousands of horses from the stress of capture, trucking and subsequent death in an abattoir. In a nutshell, many more horses will die miserable deaths without aerial culling.

If you care about horse welfare, aerial culling is by far the best management approach because it results in the smallest number of horses being killed or dying.

Aerial culling also results in the best outcome for the environment. After ten years (assuming low numbers of horses to start with) our calculations suggest that thousands of horses will remain in the national park without aerial culling.

If there are high initial horse numbers and no aerial culling, 13-16,000 horses are likely to roam the park after ten years.

In contrast, regardless of initial starting numbers, if half of the horses can be destroyed each year using aerial culling, the population can be reduced to well under 100 animals within ten years. Low horse numbers mean a low environmental impact in addition to low costs of management.

There is substantial scope to quibble over these calculations, but the quibbling is unlikely to change the conclusion that over ten years, more horses suffer and die, and the environmental impacts are substantially worse without aerial culling than with it.

Shooting from helicopters must be allowed

So we welcome the current review of the Kosciuszko horse management plan.

Rounding up and shipping out horses has had its chance as a management strategy, and it has failed completely. The result is that our iconic Kosciuszko National Park is under an accelerating path of degradation, while at the same time, thousands of horses face prolonged suffering and death in the wild.

Yes, horses are a part of the recent history and folklore of the Snowy Mountains, but in such high numbers they are doing serious damage to this special part of our country.

The 2008 decision to prohibit aerial shooting was a momentous animal ethics and environmental management stuff up. For the sake of the Kosciuszko National Park landscape, its native species and the welfare of thousands of horses, we hope the revised management plan implements horse management that will work.

Culling is an integral and effective component of pest animal management programs throughout Australia, and aerial shooting has to become a major component of the Kosciuszko horse control program.