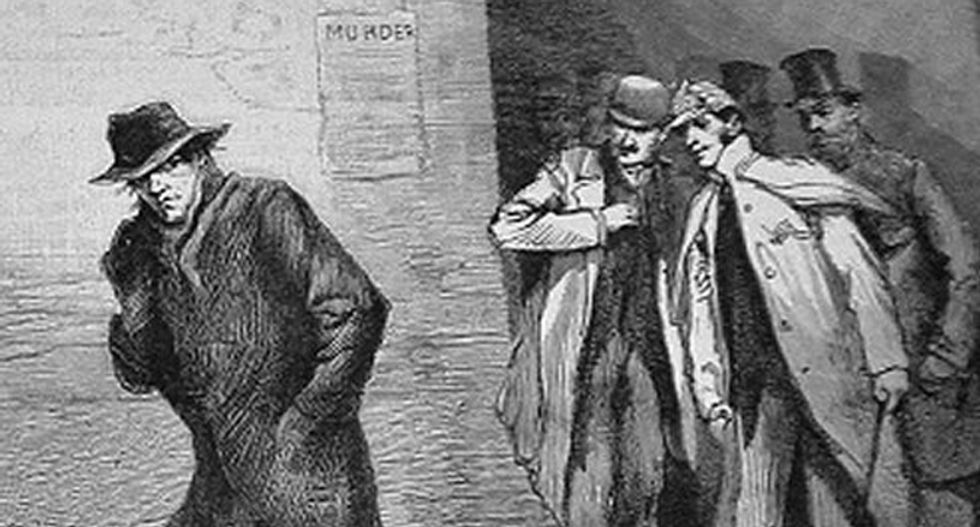 By Rosalind Crone, The Open University

A panic erupted in Britain 126 years ago. At daybreak on Saturday September 8, the mutilated body of Annie Chapman, a prostitute, had been found in the back yard of 29 Hanbury Street, Spitalfields. Her injuries and the removal of some of her abdominal organs led investigators and journalists to link Chapman’s murder with that of another woman, only a week earlier.

The publication of graphic details of the murder together with claims that an anonymous serial killer was stalking the streets at night in search of fresh victims in the London newspapers launched the metropolis into a frenzy. Yet it was not until the end of that month that the “fiend” acquired his famous appellation as a result of a letter supposedly penned by the murderer that was sent to the Central News Agency. It promised future horrific deeds and was signed “Jack the Ripper”.

Now a self confessed “armchair detective” claims to have solved one of the most enduring of cases. In a new book called Naming Jack the Ripper, Russell Edwards uncovers fresh evidence – a shawl that he bought at auction in 2007. He says it came from the crime scene of Catherine Eddowes’s murder, Jack’s penultimate victim. With the help of a scientist he collected DNA samples from the shawl which show a match to that from the descendants of both the victim and one of the Ripper suspects, Aaron Kosminski. Definitive proof that Kosminski was Jack the Ripper, he claims.

I’m not so sure. I’m not a geneticist, or a scientist of any kind, so I can’t comment at length on the rigour of the forensic techniques used. Nor, as an historian, do I really wish to. Instead, I want to present you with a different perspective on Edwards’s claims.

Three more murders followed those initial two. The inability of police to find the person responsible for these dreadful crimes not only increased the level of fear in the capital, but encouraged the emergence of all sorts of theories about the identity of this shady character. Even Queen Victoria was said to have written to the investigating team suggesting potential suspects.

The original investigation in 1888 was substantially lacking in both evidence and, more crucially, the scientific method that lies behind the recent “discovery”. There were the mutilated bodies of the victims, and the statements provided by witnesses: people who either knew the victims, discovered the corpses, or suspected their neighbours of foul deeds. Beyond this, the police had very little else to go on.

Detectives were further hampered by often unsecured crime scenes (not to mention the absence of modern forensic analysis), accusations that crucial evidence had been tampered with (for example, the supposed erasure of a message from the killer scribbled in chalk on a wall near to the location of the fourth victim, Catherine Eddowes), and a virtual tidal wave of letters from hundreds of hoaxers claiming to be Jack the Ripper.

As is always the case, conjecture, stereotype and conspiracy theory rose to fill the vacuum. Police, press and amateur sleuths assembled a long list of suspects (a list which, with some 20th and 21st century additions, contains more than 100 names). The evidence against each was (and still is) variable, at best circumstantial and often very loose. Historians examining their efforts have shown that these shortlisted men (the suggestion that Jack might be a woman was extremely speculative and convinced few) can be grouped into three categories: royalty; the “mad doctor” (or insane professional gentleman); and the immigrant, typically possessing anarchic or socialist leanings. This list was created out of the fears and prejudices of late 19th century Londoners. The three stereotypes identified above represent three groups of people who presented a threat to the local inhabitants.

Historians and most committed Ripperologists are extremely dismissive of the first category. The idea that the brutal murders were committed by a senior member of the royal family, for example the Duke of Clarence, and covered up by members of the Masonic Lodge is a conspiracy theory devoid of evidence.

But the second two categories – the other Victorian stereotypes of the villain – have stood the test of time. New evidence unearthed in recent years and the application of new scientific techniques have not challenged those original 19th century theories. The stereotypes stand.

Signature on a letter dated 29 October 1888 written by a person claiming to be Jack the Ripper.

There was a Ripper diary presented to the public by Michael Barrett in 1991 that pointed the finger squarely at (“mad”) Liverpool cotton merchant, James Maybrick. The text of the diary contained some extraordinary detail on the murders, and scientific tests confirmed that it dated from the late 19th century. Enough to convince many.

And then mitochondrial DNA tests on letters sent by Jack, combined with detailed analysis of handwriting in 2002, convinced Patricia Cornwell that she had identified the Ripper as artist Walter Sickert. Maybrick and Sickert were both new names, but they clearly belonged to the second category of suspects.

I’ve only mentioned two of a vast number of supposed unveilings of the Ripper – they have appeared almost yearly since 1990.

And now we have more “new evidence”. It seems convenient that it points to one of the original suspects. Kosminski, a Polish Jew, had been named in the famous 1894 “memorandum” or special report penned by Chief Constable Melville McNaughten, who had been involved in the case since 1889. He listed three key suspects – Montague Druitt (a school teacher), Michael Ostrong (a Russian petty criminal), and Kosminski. Until now Druitt has received most attention of the three from Ripperologists, and Kosminski very little.

In fact the evidence on Kosminski suggests a very flimsy basis for suspicion. Historian Drew Gray has claimed that Kosminski was only in the frame because he was a Jew and fitted a stereotype of the killer which evolved from late 19th century xenophobia and anti-Semitism.

Perhaps Edwards’s new discovery proves otherwise. What I find more interesting than the supposed unveiling of identity is the way in which yet more “new” evidence puts an “old” suspect squarely back in the frame and as a result helps to perpetuate the Jack the Ripper myth. With the passage of time, it seems as if it has become increasingly difficult for Ripper hunters (and the public) to entertain the possibility that the Ripper might have come from a different social category altogether.

The real secrets and stories lie in the media frenzy of the time, which offers a valuable window on London society and culture in the closing decades of Victoria’s reign. Similarly, our continuing fascination with Jack derives from his endurance as a powerful urban myth. He encapsulates pertinent narratives about modernity and sexual danger.

Jack’s anonymity is a key component of that myth. As Aaron Kosminski, he is reduced to something far less evocative, and actually with far less meaning. And so Edwards’s claim that his book has busted this myth reveals something about what science is taking away from study.

In recent years we have become inundated with claims that forensic science has “solved” numerous critical historical conundrums. As with the case of the Ripper’s identity, these are often side questions. They distract attention from the true nature of historical study – the evaluation of evidence and through this to delineate patterns of continuity and change in past societies.

In the eyes of many, science appears to offer definitive answers: the presence of a suspect’s DNA on the clothing of a victim must prove s/he is the killer. But science only offers another method for the examination of evidence, and especially in the case of historical artefacts it rarely solves the mystery. After all, in the absence of any other substantial evidence, DNA on a shawl is circumstantial. Also, science is not infallible. The 1991 diary turned out to have been forged. And Cornwell’s use of mtDNA testing has been widely critiqued.

Over the next few weeks, Edwards’s evidence and methods will be similarly scrutinised. But when all is said and done with regard to this particular case, I will be certain of one thing: Jack the Ripper’s identity will remain a mystery.

Rosalind will be on hand for an Author Q&A session between 2 and 3pm UK time today (10 September). Post your questions the comments below.

Rosalind Crone does not work for, consult to, own shares in or receive funding from any company or organisation that would benefit from this article, and has no relevant affiliations.