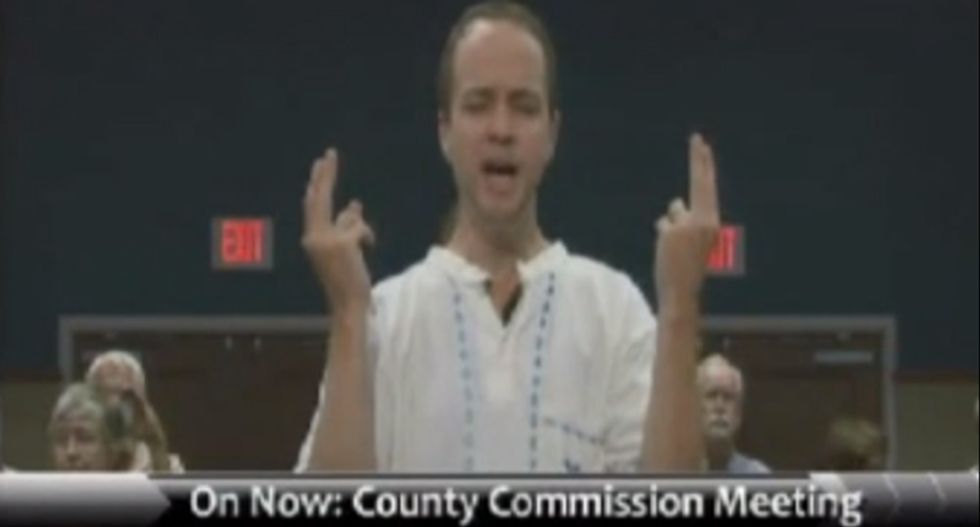 David Suhor, who describes himself as a Agnostic Pagan Pantheist, was given the go-ahead to deliver the  invocation before the board on Thursday and, as he stepped to the podium,  Commissioner Wilson Robertson walked out before Suhor even began, reports ABC3-WEAR.

Robertson, who describes himself as a Christian, told a reporter, "People may not realize it, but when we invite someone a minister to pray they are praying for the county commissioners for us to make wise decisions and I'm just not going to have a pagan or satanic minister pray for me."

Suhor, whose religion worships nature, explained that he wants others to experience what he feels when attending public meetings.

"In a way I would like for other people to experience what it's like when I go to a meeting and am asked to pray against my conscience," he said.

Suhor has been attempting to deliver invocations at various public functions, including before the Escambia County School Board, where he has previously been blocked, after being told he might "offend" attendees.

According to The Friendly Atheist, one board member threatened to walk out on Suhor and took to his personal website to criticize the pagan and his religion, writing, "I mean, should the majority of persons in attendance at one of our meetings really have to listen to a satanic verse? What if a “Witch Doctor” comes to the podium with a full-on costume, chicken-feet, a voodoo doll and other associated over-the-top regalia? It could easily get out of hand..."

His goal he says, is to eliminate them altogether and substitute in a moment of silence.

The Supreme Court recently ruled that prayer is allowed at all public meetings, but that all religions must be included, including speech from atheists.

Watch the video below from ABC3-WEAR: