Brianna Wu and the human cost of Gamergate: 'Every woman I know in the industry is scared' 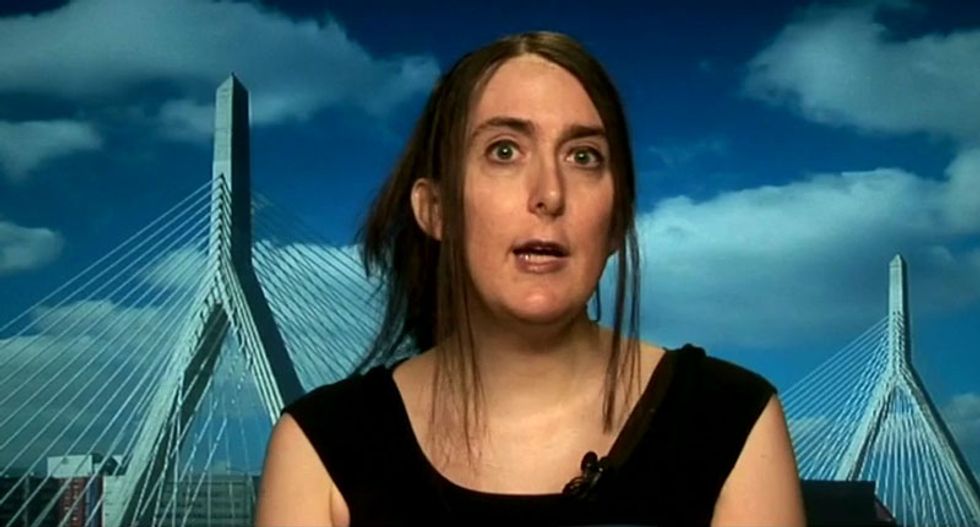 Brianna Wu doesn’t know when she can go home again. She can’t tell me where she is – doing so might not be safe. Last Friday, her personal details were pasted on the chat forum, 8chan. Within minutes she was receiving sickening threats. One tweet said, “I’ve got a K-bar and I’m coming to your house so I can shove it up your ugly feminist cunt.” She said to her husband, “we’ve got to get out of here”. They called the police; the police agreed. She was sobbing uncontrollably.

Brianna Wu is a games developer.

Four years ago, after working in animation, and then journalism, Wu founded a small development studio, Giant Spacekat . The company’s first game, Revolution 60, was launched earlier this year: it’s a cartoonish science fiction adventure for smartphones, notable for its all-female cast and cinematic story, a rarity on mobile platforms. The critical response has been favourable, and Wu drew quite a following on Twitter , both through her game and her work hosting the gaming podcast Isometric.

She has also been vocal in her condemnation of Gamergate, a loose affiliation of discontented gamers, ostensibly massing over fears of journalistic corruption – though originally driven by a 4chan campaign targeting another female game developer, Zoe Quinn, sparked by a rambling blogpost by an ex-boyfriend of Quinn’s, Eron Gjoni.

Last week, a fan of Wu’s work produced a photo meme, featuring some of her humorously barbed tweets about Gamergate. She liked the joke, so she re-tweeted. Gamers on 8Chan, the forum where a sizeable section of the Gamergate community now meets, took offense. So they started to generate their own versions of the meme, jammed with insults.

Then someone posted a stash of her personal details – a form of internet abuse known as doxing. “I was literally watching the chat room as the site posted my address and the conversation moved to places that threatened my personal safety,” she says. “I made the decision to leave, and law enforcement said it was reasonable. I basically just left the house. I have no idea where I’ll be living this week or even next month.”

Wu blamed Gamergate’s participants; they took exception. There were genuine attempts by followers of the movement to take down the increasingly violent insults. But there were also dozens of tweets more concerned with defelecting blame than expressing horror. There was also skepticism: some suggested, just as they had when developer Zoe Quinn and cultural critic Anita Sarkeesian were forced from their homes by threats, that Wu had made it up (a practice generally known as a “ false flag ”: such phrases from military psychological warfare are becoming part of the discourse).

Understandably, it’s an accusation that Wu scoffs at. “I’d like to think I’m a respected developer in this field,” she says. “At this point the FBI is involved. My local police department is involved, the Massachusetts cybercrime division is involved. If I made this up, I’ll be going to jail. I can think of no quicker way to destroy my career than doing something stupid like that.

“I think it shows a really disturbing mindset from people on the other side of this. They want to attack the person that’s the victim of a crime. It’s a terrible, destructive impulse.”

Wu is a game developer; that’s how she wants to be known. But she is now something else too – a media personality; a figurehead in this bizarre and bewildering cultural war between a subset of angry gamers, and just about everyone else. She has spent the week talking to media outlets – Bloomberg, CNN, CBS, the Washington Post. She appeared on MSNBC’s Reid Report talking about industry sexism and harassment. She has been on the recent BBC Tech Tent programme about Gamergate.

“I think there is a war on women in technology,” she said to the BBC’s technology correspondent Rory Cellan-Jones. “It’s not like I’m advocating that we ban Call of Duty or anything silly like that, I’m asking is for companies to look at their hiring practices, to hire more women... and make sure they portray women in their games in a socially responsible way.”

The abuse continues. “Last night, someone was tweeting me quotes from my death threats,” she says. “Even scarier for me is the public campaign to discredit and destroy me by Gamergaters. Reddit has an entire thread devoted to it. 8chan and 4chan also have entire threads.” Just today, Wu tweeted a link to an apparent discreditation project named Operation Falseflag II: it proposes creating fake feminist Twitter accounts and then attacking her game for objectifying women.

While many Gamergate voices have strenuously denied being involved in Wu’s harassment – even though much of it is being generated on the 8chan site (as Gamergate discussions have been banned from 4chan by the site’s owner) – the developer herself has no doubts.

“I want to say unequivocally, Gamergate did this to me,” she says. “If I’m saying this less on Twitter it’s because I feel fanning the flames will endanger my life even more. I know that many #gamergate supporters are trying their best to distance themselves from these events, but I agree with many others that feel the movement is inexorably linked with misogyny and sexism.

“Don’t take my word for it. Anyone can go to 8chan, a website entirely for Gamergaters. You can read what they post about me and other women. It’s not just casual sexism, it’s angry, violent sexism. They don’t see me, Zoe or Anita as people, just objects to be destroyed.

“I am a programmer. If I write code, I don’t evaluate the results by what I hope the code will be. I evaluate it by what happens when I compile it. I evaluate it by results. Right now, the result of #gamergate is this: Every woman I know in the industry is scared. Many have thought about quitting. Three of us have been the victims of death threats, and some of this have been driven from our homes.”

So what’s next, what has to happen? “The most terrifying outcome from this would be if this becomes the new normal for women in this industry,” she says. “I can’t pretend there are easy answers. Both Zoe Quinn and I are represented by senator Elizabeth Warren in Massachusetts. I reached out to her this week, because I’d like to see what work can be done on a national policy level.

Wu says she’s not eating, and not sleeping well. She doesn’t know where she’ll be living or sleeping next month. This is because she made games, talked about sexism and enjoyed a joke at Gamergate’s expense.

And before that. Anita Sarkeesian, swamped with threats and hatred for analysing games and representation; Zoe Quinn, targeted because of disproved claims that she slept with a games journalist in return for positive coverage. Jenn Frank, one of the best writers about games and games culture for the last ten years, chased from the industry thanks to a piece she wrote for the Guardian about online abuse . The irony is so bitter it burns. I commissioned that article. I edited it. I am remain devastated by Frank’s understandable decision; devastated for my part in it.

I don’t think that everyone who uses the Gamergate is evil, but moderates need to look at what is being done under, or within spitting distance of, its banner. Lives are being ruined and the world’s media is looking at gamers, just at a time when the medium was being taken seriously, and it is seeing its prejudices realised. Gamergate was front-page news in the New York Times when Sarkeesian had to cancel a talk over threats of a “massacre” (also dismissed as a “false flag” by Gamergate supporters); Cellan-Jones wrote on the BBC’s site that while he wouldn’t pick over the rights and wrongs of Gamergate (for the BBC is assiduous in not taking any sides in any debate),

“a couple of things are clear. It started with attacks on a female developer and the journalists she knew, and has given rise to a whole lot more viciousness, most of it aimed at women who dare to raise their heads above the parapet.”

If a BBC correspondent states that, you can take it as fact.

Earlier this week, Gear of War designer Cliff Bleszinzki blogged on this very issue . He wrote this:

“We’re not supposed to be a mob that’s storming the gates with our pitchforks and torches.”

It’s time for reasonable people to pull away. To form something else. To take everything they’ve learned about agitation and protest, and apply it in a very different way. Don’t have all this on your conscience.

We just have to make sure they can go home in peace.