Mocked by the conservative press, disabled man at Wendy Davis event hits back on Facebook 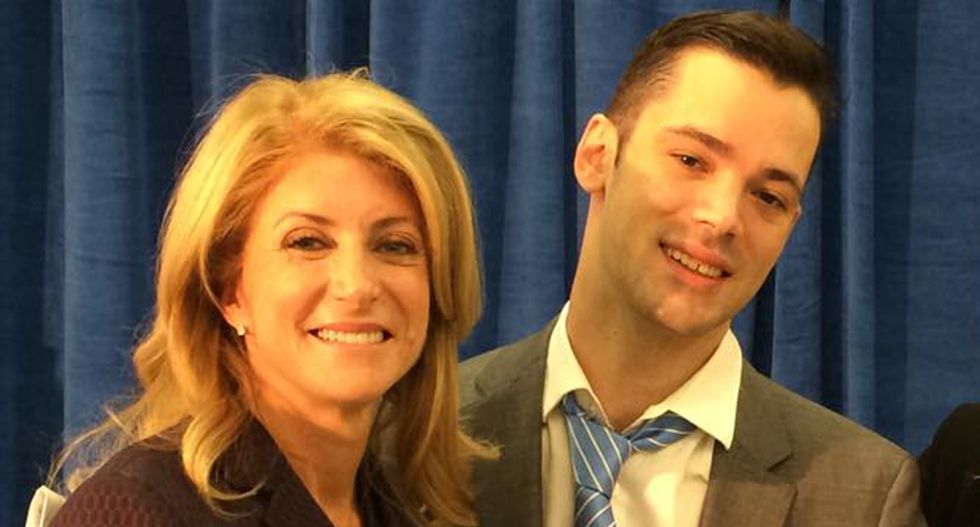 Conservatives attempting to step up their attacks on Texas gubernatorial nominee Wendy Davis over an ad they claim mocked her opponent's disability ended up making offensive remarks themselves about the disabled, calling attendees at a Davis press conference "props," and making fun of a speaker with cerebral palsy.

Holding a press conference today to address criticism of the ad, Davis invited guest speakers impacted by opponent Greg Abbott's attempts at tort reform that would impact their lives.

Lamar White Jr., a law student at Southern Methodist University who suffers from cerebral palsy, spoke in support of Davis at the press conference while seated. Following his speech, he requested staffers slide his chair over with him in it so the next speaker could reach the microphone, explaining  he was afraid he would fall over.

Seeing video of White being shifted over, Andrew Stiles of the Washington Free Beacon, mocked White and the staffers, calling them "awkward."

Under the headline "AWKWARD: Watch This Wendy Davis Staffer Drag a Disabled Man Across a Stage," Stiles wrote, "But things got a little awkward at one point when one of the disabled speakers was dragged across the stage in a chair by (presumably) a member of the Davis campaign."

Responding on Facebook, White responded to Stiles, calling him a "jerk."

"Dear Friends," he wrote. "Do me a favor and blast this jerk for making fun of how I moved. I asked them to slide me over after my remarks because I was afraid of falling down. His Twitter handle is @AndrewStilesUSA. His email address is stiles@freebeacon.com. And by the way, I didn't think it looked awkward. It's just how I roll."

“I’m clumsy, and I fall sometimes. I didn’t want to fall on camera, so I personally asked them to slide me over in the chair,” White later explained to The Chronicle. “I asked them to move me. Because I was worried that if I stood up, I’d fall down on camera.”

Viewing the same video, News Editor at Townhall.com Katie Pavlich, called the attendees on the dais with Davis "props."

Pavlitch wrote, Davis was "digging deeper and doubling down with human props," and called inviting disabled victims who support Davis to appear on camera with her "shameless."

Watch the video below uploaded to YouTube by Jordan Williams: