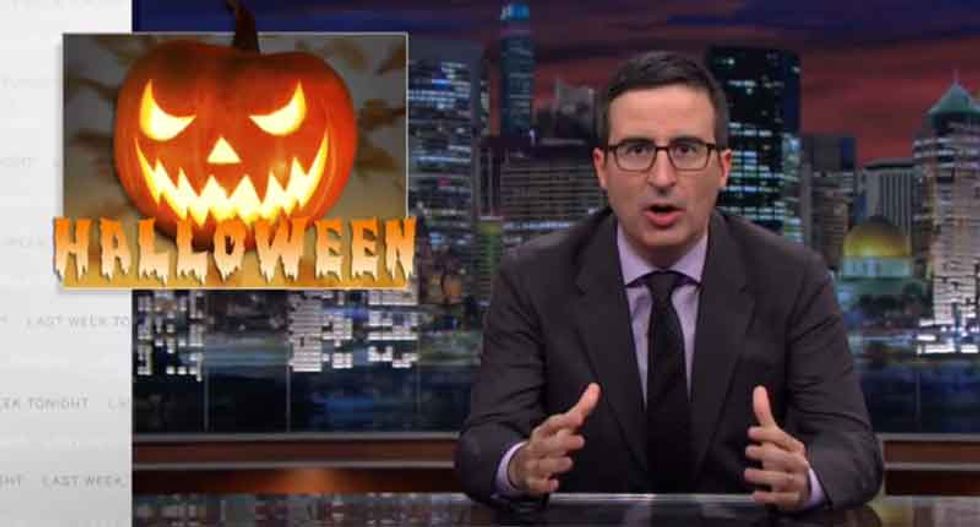 Americans consume 75 pounds of sugar per year -- much of it hidden in packaged goods the food and beverage industry doesn't want you to know about. So, after a short bit about ridiculous "sexy" Halloween costumes, including a "sexy John Oliver costume" featured by Playboy, Last Week Tonight host John Oliver turned his attention Sunday night to the $5 billion sugar industry.

"This Halloween, Americans will spend $2.2 billion on candy ...But, is it really fair to consider candy a treat considering how much we eat it all year round?," Oliver asked.

"Sugar activates our brains like cocaine," he said. "With sugar being so viscerally appealing to us, it's no wonder that food manufacturers put it in everything -- and I do mean everything."

As Oliver then noted, the food and beverage industry is fighting a new FDA proposal to require packages to include the amount of added sugars on labels.

"We are proposing, in the spirit of Halloween, that product manufacturers express their sugar content in the form of candy," Oliver said. "Specifically, circus peanuts, the most disgusting of all the candies. They taste like an elephant ejaculated into a packet of Splenda."

Oliver called on viewers to support this idea by tweeting food makers with the hashtag #ShowUsYourPeanuts.