'Man in the Moon' likely born from lava 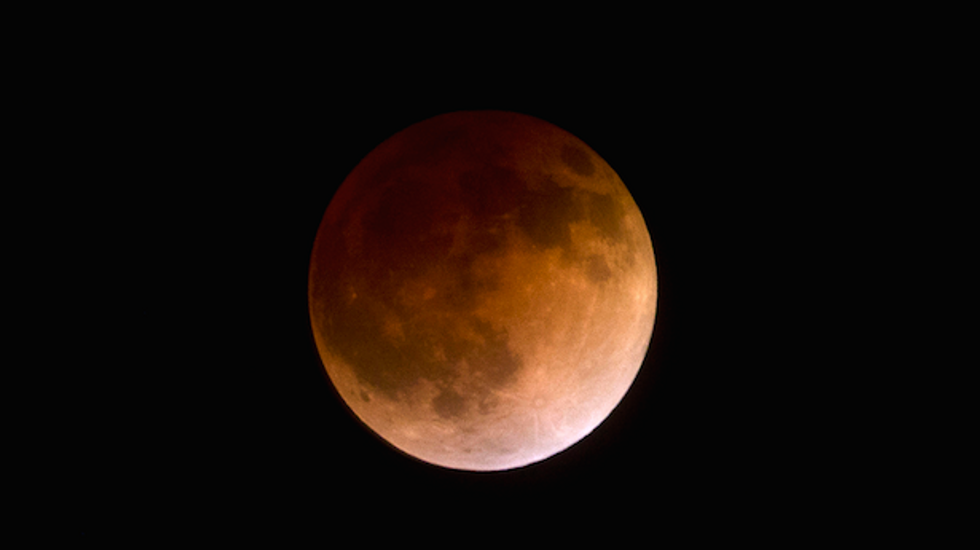 A dark lunar basin that, seen from Earth, produces the "Man in the Moon" effect, was created by an outpouring of lava and not an asteroid strike, astronomers said Wednesday.

Known as the Oceanus Procellarum -- the "ocean of storms" as classical skygazers dubbed it -- the vast basin measures nearly 3,000 kilometers (1,900 mile) across.

Until now, the main theory to explain this extraordinary feature was that it was born when a massive space rock smashed into the Moon in its infancy.

But a study published in the journal Nature offers evidence that a volcanic outpouring created the blotch that covers roughly a fifth of the visible side of the Moon.

Analysing data from a NASA mission, astronomers found remnants of ancient rifts in the Moon's crust that were once a "magma plumbing system," according to the paper.

This system flooded the region with lava between three and four billion years ago, which then solidified to create the tell-tale dark basalt rock visible from Earth today.

The rifts became discernible thanks to a 2012 mission called GRAIL, entailing two probes chasing each other as they swung around the Moon.

As the leading spacecraft passed over an area with a thinner or thicker crust, the gravitational pull on it changed -- and this briefly altered its distance form the chasing probe.

By measuring the minute "accordion" movement between the two probes, scientists were able to map differences in the Moon's crust.

The map showed that the rim of the Procellarum region is a polygon shape, with edges that join at 120-degree angles.

This is the signature of contraction by molten material that has cooled and crystallized, whereas the impact of an asteroid whack would have created a circular or elliptical crater, the scientists believe.

Still unclear, though, is why the upwelling of lava occurred, said Maria Zuber, a professor of geophysics at the Massachusetts Institute of Technology (MIT).

"How such a plume arose remains a mystery," she said.

"It could be radioactive decay of heat-producing elements in the deep interior. Or, conceivably, a very early large impact triggered the plume. But in the latter case, all evidence for such an impact has been completely erased."