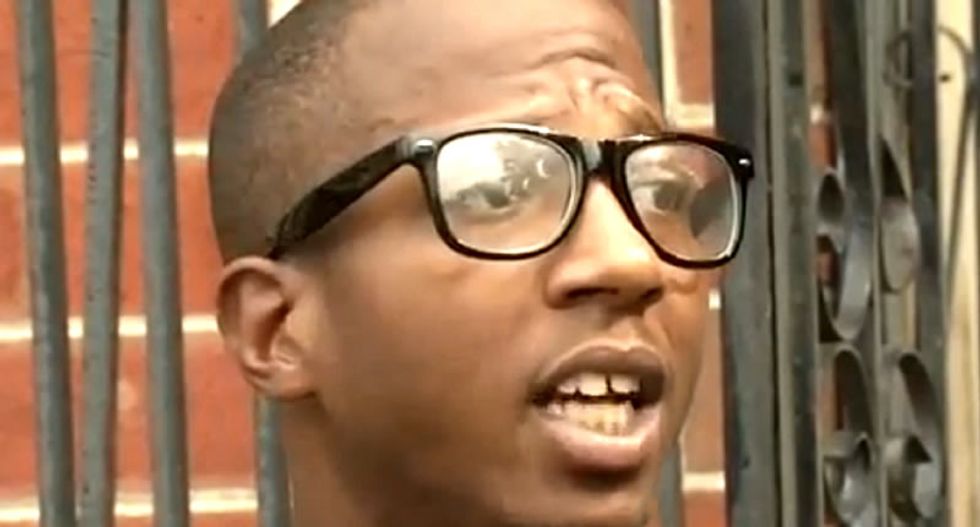 According to a report on Democracy Now, a 16-year-old New York teen spent nearly 800 days in solitary confinement after being accused -- but never even tried, much less convicted -- of stealing a backpack.

On May 15, 2010, Kalief Browder was returning home from a party in the Bronx with a friend. He was stopped by police, who were working on a tip that he had robbed someone earlier that night. In the backseat of the police car, the man who provided that tip pointed at Browder and said he had stolen something from him.

"I didn't do it," Browder responded. "I didn't steal anything. Check my pockets."

The police went back to the car to consult with the man in the backseat, who then changed his story, and said that the robbery had occurred a few weeks earlier.

Browder accompanied the police to the station, thinking, "I’m just going to be here for a couple hours. We’ll clear up this misunderstanding."

It would be three years before the "misunderstanding" was cleared up.

He was sent to Rikers Island, the jail complex where individuals from New York City wait while their case moves through the court system. Because Browder was on probation for a prior case, his bail was set prohibitively high -- $3,000 -- and his family was unable to pay it.

Like many, Browder was being held in one of the most appalling, abusive juvenile facilities in the country in order to force him to plead guilty to the charges against him.

Jennifer Gonnerman, who wrote about Browder's plight in The New Yorker, said that his trial was then indefinitely delayed. On June 23, 2011, prosecutors requested a one-day delay, which turned into three months, because on August 24, 2011, they requested another day, which also turned into another three months.

On November 4, 2011, prosecutors requested another two weeks. "Once they asked for a week or two weeks, it would turn into a matter of scheduling," she said.

Gonnerman explained that this is because of what's called "the ready rule," in which prosecutors can say, "we're not ready, but we can be ready in a week."

"So that's one week charged against them," she continued. "But the court -- the next court date is set one month, two months, three months away. So that only counts as one week against the six-month deadline that we have in New York. So, even though he was held for three years, it’s not like there’s three -- the three years count against him."

"So time is moving in two separate ways."

The charges against him were eventually dimissed -- three years later -- after the credibility of the witness became suspect.

Browder and his family are considering filing a civil lawsuit against the city for his treatment.

Watch the full report on his arrest and the deplorable conditions in which he was held via Democracy Now below.