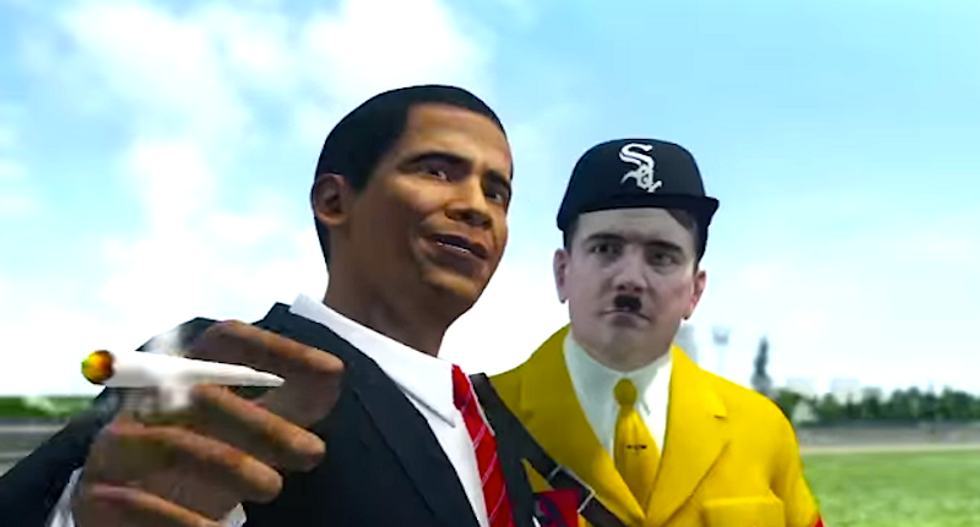 The “Republican” punk band The Yuppie Pricks traffic in Poe’s law with their latest video, “Obama,” which can be appreciated whether or not you take the lyrics ironically or straight up.

Poe’s law is an Internet adage that holds that it’s basically impossible to parody extremism or fundamentalism that won’t be mistaken as serious without a blatant display of humor.

The Yuppie Pricks, who perform in John McEnroe-style tennis outfits, celebrate materialistic excess in songs such as “Coke Party” and “F*ck You, I’m Rich.”

The Austin, Texas, band sings their latest single to the tune of the Sex Pistols’ “Bodies,” which has been considered an “anti-abortion tirade” by some listeners.

The lyrics denounce President Barack Obama as a “boy from Kenya-stan” who “has no birth records” and goes on frequent vacations to Hawaii.

"How could the Dems be so ignorant to give the White House to an immigrant?" sings frontman Trevor Middleton.

The video, which is animated in the style of Taiwanese news re-enactments, shows Obama smoking marijuana with a shirtless gay man, Satan, and Adolf Hitler, and later bowing down to face Mecca in a Muslim prayer.

Their latest album, “Appetite for Consumption,” was funded in part by a “Prickstarter” campaign that promised a three-day Las Vegas trip with band members for donors who contributed $30,000 – although The Yuppie Pricks promised to give back $5,000 if the contributor promised to bet it all on one hand of blackjack.