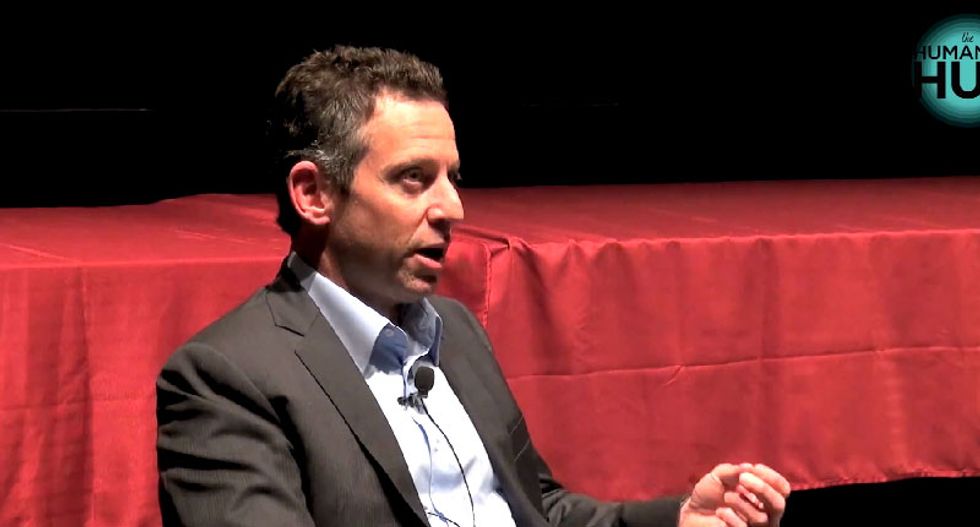 The atheist author has been engaged in a longstanding war of words with Greenwald and Aslan over his criticisms of Islam. The feud reignited earlier this month after actor Ben Affleck angrily described Harris's views as "racist" and "gross" on HBO's Real Time with Bill Maher.

During a discussion at the Harvard Science Center last week, Humanist Chaplain Greg Epstein questioned why Harris was so critical of Islam. Epstein noted that Harris had acknowledged other religions, like Zen Buddhism, have been used to justify violence.

"For years, I’ve recommended that people read Zen War Stories and Zen At War if you want to see the connection between Zen and kamikaze pilots," Harris said. "Now, the truth is it was never pure Zen. It was Zen mixed with Shinto mixed with a kind of Japanese nationalism and war ethic. So it was a weird brew, but it was not at all a surprise that certain Zen teachings, which do not emphasize compassion to the degree that most Buddhist teachings do, could be spun into this sort of martial ethic."

"But to give a more relevant and current example, and this trips off (a ton of Muslim apologists) at this moment, the crazy monks in Burma who are running around killing Muslims and advocating for killing Muslims," he continued.

"This is being held up as a Buddhist Bin Laden, right? Now it’s true that (the leader of the movement) is an abhorrent character and what they are doing is abhorrent, but it basically has no connection to the doctrine of Buddhism. This is just pure tribal violence carried out by Buddhist monks."

"I would be amazed if you could string together a paragraph of justification for this behavior, and that is different," Harris said. "There is no doctrine of jihad in Buddhism. There is no statement that you should kill apostates and blasphemers in Buddhism."

"It is different to say that Buddhism is the source of this violence. It’s just not. These are people being violent. Now that said, it is possible to have – Hinduism can definitely be a source of violence."

Harris also said he regretted some of the language he used in his book The End of Faith, which was written shortly after the 9/11 terrorist attacks, but did not regret the ideas he expressed in the book.

“I was totally insensitive to the prospect of being quoted against myself out of context,” he remarked. “I just sort of let it rip.”

Harris said he was having conversations about Islam with Maajid Nawaz, a Muslim reformer, and attacked Greenwald and Aslan, who have accused him of being an "Islamophobe."

“That is a distinction between him and someone like Glenn Greenwald, who is just out to lunch as a liberal, and Reza Aslan, who pretends to be an expounder of Islam as it is, but just plays hide the ball with the articles of faith as quickly and dexterously as he can.”

On his blog, Harris accused Greenwald and Aslan of being "engaged in a campaign of pure defamation" against him, showing that the duo took a comment from his book out of context to smear him.

"Both Aslan and Greenwald are debasing our public discourse and making honest discussion of important ideas increasingly unpleasant -- even personally dangerous. Why are they doing this? Please ask them and those who publish them," he wrote on Sunday.