'It's gross, it's racist': Ben Affleck and Bill Maher clash over criticizing Islam 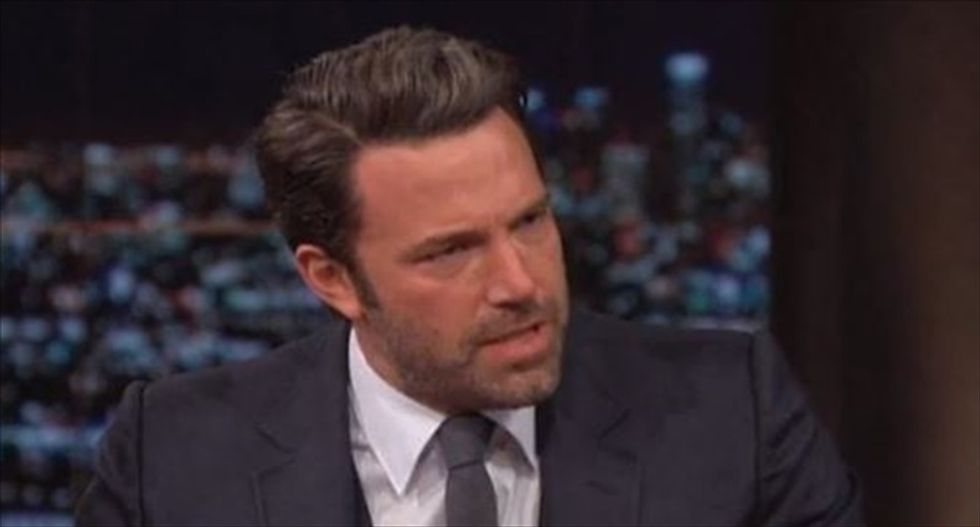 "Why are you so hostile about this?" Maher asked Affleck.

"It's gross, it's racist," Affleck replied.

"It's so not," Maher insisted, though Affleck compared it to using the term, "Shifty Jew."

"You're not listening to what we are saying," Maher insisted.

"You guys are saying, if you want to be liberal, believe in liberal principles," Affleck said, referencing Maher's monologue last week. "Like, we are endowed by our forefathers with inalienable rights, all men are created equal."

Harris, who had complained about criticism of the Muslim religion being dismissed as Islamophobic, countered that liberals should be allowed to criticize bad ideas.

"Islam is the motherlode of bad ideas," Harris argued.

---> NEXT ON RAW STORY: Bill Maher on ‘born-again booty callers’: Who do you have to blow to get thrown out of Congress?

Journalist Nicholas Kristof then cut in, telling Maher he was painting an "incomplete" picture of the religion by failing to account for reformers like activist Malala Yousafzai.

"Or how about the more than a billion people who aren't fanatical, who don't punish women, who just want to go to school, have some sandwiches, and don't do any of the things you say all Muslims do?" Affleck said.

But Harris countered that the strongest voices in Islam belong to not only extremists, but conservative Muslims who, while criticizing terrorist groups, still follow practices that keep other members of their communities "immiserated."

"It's the only religion that acts like the mafia," Maher said. "They will f*cking kill you if you say the wrong thing, draw the wrong picture, or write the wrong book."

Former Republican National Committee chair Michael Steele pointed out that Muslim clerics from several countries have condemned the actions of groups like the Islamic State, without getting much attention for it.

"Where was the coverage?" Steele asked. "Where was that story to create a different picture?"

Affleck then rebuffed Maher's attempt to laugh the discussion off.

"I'm simply telling you, I disagree with you," Affleck said, before Maher cut him off.

"I know, and we're obviously not convincing anybody," Maher said.

Maher did not address criticism directed toward him by religious scholar Reza Aslan, who said on CNN that his views on the religion were "not very sophisticated."