SC governor defends Confederate flag at Statehouse: Not 'a single CEO' has complained 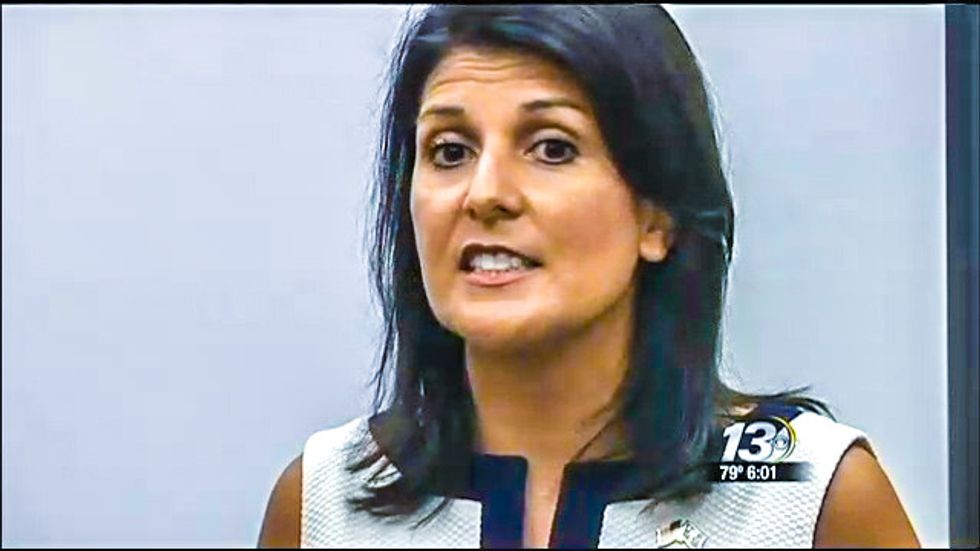 South Carolina Governor Nikki Haley (R) on Tuesday said that there was no need to remove the Confederate battle flag from the Statehouse grounds because it was not an issue for CEOs, and the state had "fixed" racist perceptions by electing an Indian-American governor.

During a South Carolina gubernatorial debate, Democratic candidate Sen. Vincent Sheheen called on the flag to be retired to a museum.

"I think the people of South Carolina are tired of having an image across America that's not truly who we are," Sheheen explained, adding that everyone should "rally together under a flag that unites us all, the American flag, that looks toward the future, and not the past."

Haley responded that the Confederate flag was a "sensitive issue."

"What I can tell you is over the last three and a half years, I spent a lot of my days on the phones with CEOs and recruiting jobs to this state," the governor noted. "I can honestly say I have not had one conversation with a single CEO about the Confederate flag."

Haley said that she had tried to improve the perception of the state by ordering employees to answer the phone with the phrase "it's a great day in South Carolina."

"But we really kind of fixed all that when you elected the first Indian-American female governor," she insisted. "When we appointed the first African-American U.S. senator, that sent a huge message."

Independent libertarian candidate Steve French said that he believed in the concept of "individual liberty" when it came to the Confederate flag.

"So, if you want to paint your house in the Confederate flag, I am completely fine with that," he remarked.

But French disagreed with Haley when it came to businesses, saying that he had spoken with entrepreneurs who refused to move to South Carolina because the state was perceived as a "backwoods good ol' boy network."

"And that flag, I think, represents a lot of division in this state, and we need to be coming together," French observed.