Texas GOP lawmaker: Secularism is like Nazis putting a 'bullet through the throat' of Jews 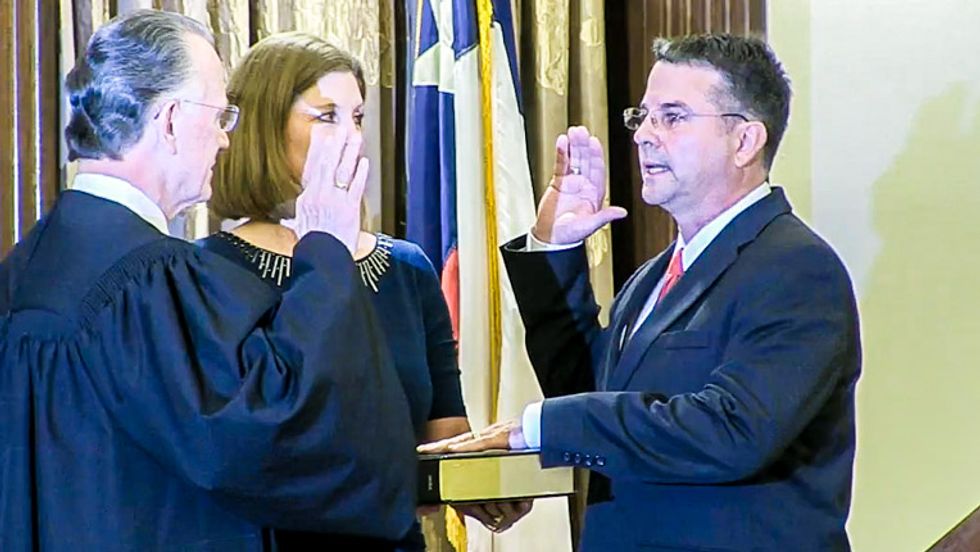 Texas state Sen. Charles Perry (R) used his inauguration speech on Tuesday to warn that a government without God was similar to the Holocaust under Nazi Germany.

After placing his hand on the Bible and taking the oath of office, the newly elected Republican talked about a "spiritual battle" that was been waged in the United States, according to Lubbock Online.

“There were 10,000 people that were paraded into a medical office under the guise of a physical," Perry explained. "As they stood with their back against the wall, they were executed with a bullet through the throat. Before they left, 10,000 people met their fate that way."

“Is it not the same than when our government continues to perpetuate laws that lead citizens away from God?" he asked. "The only difference is that the fraud of the Germans was more immediate and whereas the fraud of today’s government will not be exposed until the final days and will have eternal-lasting effects.”

Later in the speech, Perry pointed to same-sex marriage and abortion as areas where the country had turned its back on God.

“Roe v. Wade condemned 55 million innocent and defenseless souls that cried out for righteousness from a God who is just — we will answer for that as a nation,” he insisted.

Pastor Jeff McCreight of Rock City Church, who also spoke at the inauguration ceremony, said that the "41-year-old Holocaust called abortion" made "Hitler look like a humanitarian."