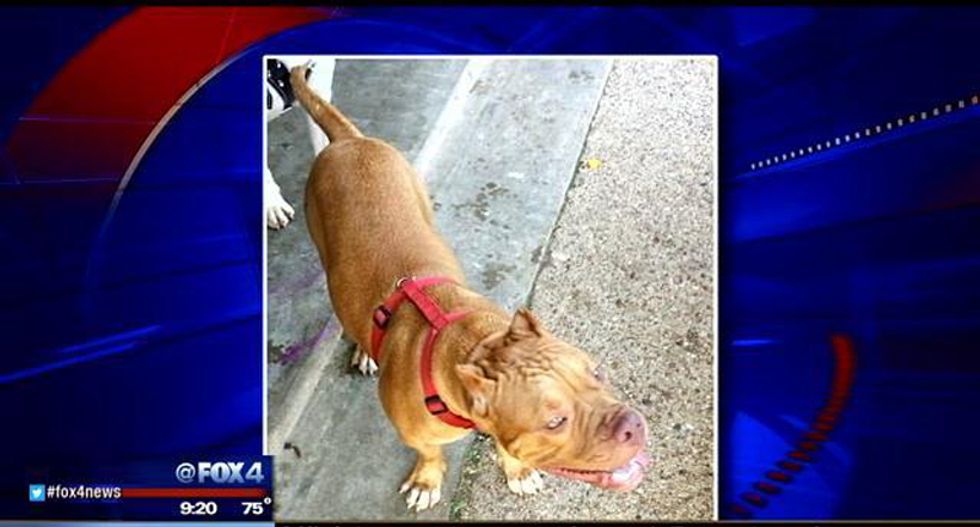 A Texas couple is accusing a Cleburne police officer of luring one of their pit bulls that had escaped their yard with 'kissing noises' before shooting the dog three times, killing it.

The officer's account of the shooting, which occurred several months ago, is being questioned following the release of video from the officer's body cam, according to Fox-4 DFW.

According to authorities, officers were dispatched to the neighborhood after receiving a 911 call stating that several pit bulls were running loose, trapping an elderly woman and an infant in a car. When officers arrived they found three pit bulls running loose. One of the dogs came up to an officer, jumping up and placing its paws on the officer's chest before being told to get down.

Two other pit bulls were found in a nearby ditch.

In the video provided by the police, the officer can seen holding his service revolver in front of himself while make noises attempting to draw the dog's attention. Seconds later the officer fires three shots in quick succession.

In his report the officer wrote, "“I raised my duty weapon to the ready position – pointed at the growling dog's head. As soon as I lifted my pistol, the dog began coming up the hill, continuing to growl and display its teeth…I fired three shots at it.”

The dog, identified by owners Quinton Tatum and his wife Amanda Henderson as Maximus, died at the scene. The other dog, Coco, ran off but was later retrieved without a leash by an Animal Control officer.

Demonstrating the 'kissing noises,' Tatum explained that he also used it to call his dogs.

"That dogs knows what that is. He's friendly, I'm going to come to him. That's how I talk to my dogs," Tatum said. "And you use that to take his life? Words can't even explain that."

After viewing the video, Henderson added, “They don't match up. Cause whenever we see the video, it's heartbreaking. What I see is him kissing him over to kill him.”

The couple admitted that the dogs escaped their yard while they were not at home.

In a statement the police state the video is edited, but that it doesn't show all of the details.

“The City is obviously concerned about the video showing an officer shooting a dog. As is often the case, the short video does not tell the whole story," the statement said."The officer was responding to a 911 call for assistance. Three dogs had pinned some residents in a vehicle. One dog was secured without incident before the shooting. The officer was attempting to secure the other dogs until animal control arrived when one dog became aggressive."

The incident is still be reviewed by police investigators.

Watch the video below from Fox 4 DFW: