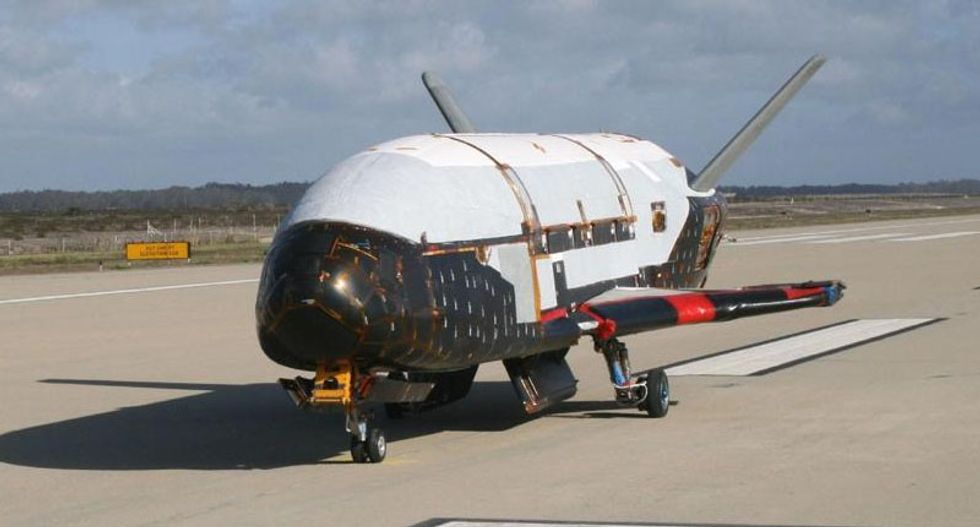 This April 4, 2010, file photo provided by the US Air Force shows the X-37B spacecraft, which is expected to land this week after a 22-month orbit (AFP Photo)

The US military's mysterious robot space plane is expected to land this week after a 22-month orbit, officials said Tuesday, but the craft's mission remains shrouded in secrecy.

The unmanned X-37B, which looks like a miniature space shuttle, is due to glide back to Earth after having launched on December 11, 2012, on a mission that military officers say is strictly top secret.

"Preparations for the third landing of the X-37B are underway at Vandenberg Air Force Base" in California, said a US Air Force spokesman, Captain Chris Hoyler.

"The exact landing date and time will depend on technical and weather considerations," Hoyler said.

A defense official said that the space plane will likely touch down sometime this week and that future missions would seek to extend the vehicle's technical capabilities and time in orbit.

But the official, who spoke on condition of anonymity, declined to discuss exactly what the space plane carries or what its purpose is.

"The specific parameters are unreleasable," the official said.

Analysts say the X-37B could be a platform for spying from space, including possibly snooping on other countries' satellites.

But officials have previously denied the project had anything to do with creating a "space weapon" that could knock down other satellites.

The Air Force says the X-37B can test technology for "reusable" spacecraft and conduct unspecified experiments that can be studied on Earth.

The latest mission was the third and the longest so far for the vehicle. An initial flight launched in 2010 lasted about eight months and a second flight had the spacecraft in orbit for more than 15 months.

The X-37B, manufactured by aerospace giant Boeing, weighs five tonnes and measures about 29 feet (8.8 meters) long, with a wing span of roughly 15 feet across.

Traveling at speeds 25 times faster than the speed of sound, the vehicle is launched into space on the back of a rocket and, once its mission is complete, returns from orbit like a plane.

But, unlike NASA's civilian shuttle, it has two stabilizers in the rear instead of one, forming a "V" shape.