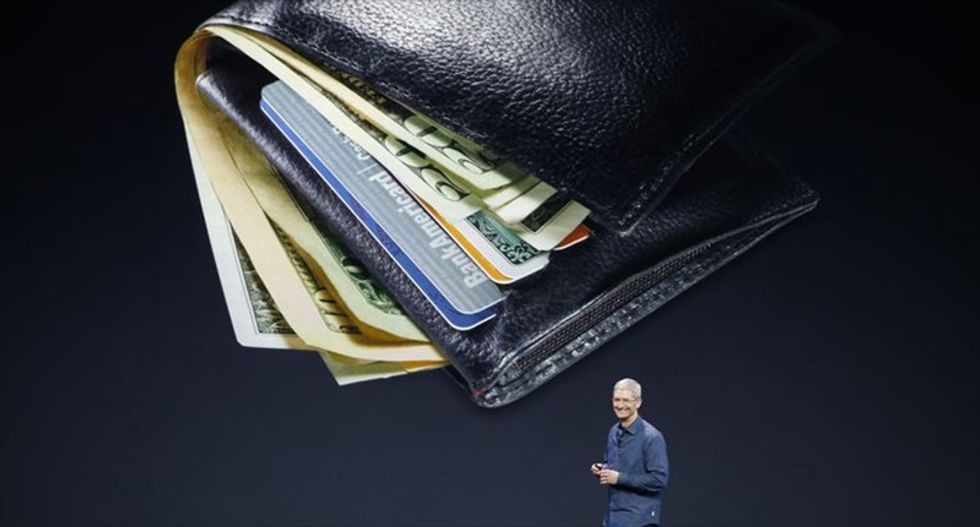 Apple CEO Tim Cook speaks about Apple Pay during an Apple event at the Flint Center in Cupertino, California, in this file photo from September 9, 2014. REUTERS/Stephen Lam/Files

Suddenly it's Apple versus Wal-Mart in the fight for shoppers' digital wallets.

With the development of a new mobile payment system, a group of retailers led by Wal-Mart Stores is aiming to upend the $4.5 trillion credit card market and control the precious transaction data generated at the checkout line.

The difficulty of the task became clear this week when drugstore chains CVS Health Corp and Rite Aid, in a move apparently aimed at shoring up the retailers' pay system, stopped accepting payments on Apple Inc's iPhones. That prompted consumers to complain that they were being denied a user-friendly payment option.

The “skirmish,” as Apple CEO Tim Cook put it this week, is the latest dispute to emerge from the Byzantine world of payment systems, which is dominated by banks and credit card firms.

Many payment experts said they are skeptical that the retailer-backed system, known as CurrentC, can gain traction, let alone thwart Apple Pay, a payment system launched by the iPhone maker last week. CurrentC is set to go live in 2015.

The retailers' main objective appears to be to push credit card companies out of the payment equation, or at least get them to lower their costs.

"CurrentC is built for retailers, to help them cut out interchange fees," said Nick Aceto, senior director at payment technology firm CardConnect, referring to the fees paid by retailers to credit card companies when a shopper makes a purchase. "It's not a solution that will appeal to customers because it does not make their lives any easier."

That's not stopping the retailers from trying, and their consortium, the Merchant Customer Exchange, has clout, with $1 trillion in annual sales. In addition to Wal-Mart, its members include Best Buy Co and Target Corp.

MCX officials said CurrentC will work on any phone, integrating loyalty programs and payments into one transaction. While the group's focus is helping consumers, they said, it hopes to shake up the payment system.

"MCX and the merchants that founded MCX are challenging ... an entrenched, very large status quo, a $500 billion ecosystem on the payments side," Chief Executive Dekkers Davidson said on a conference call Wednesday.

Davidson said MCX has made arrangements with two credit card companies and wants to partner with large issuers. But he did not say whether MCX would be willing to work with the likes of Visa Inc and Mastercard Inc and pay them conventional rates on interchange fees. Eventually, he said, "We expect that all cards will be welcome at CurrentC."

Wal-Mart, which has made little secret of its disdain for paying processing charges, is suing Visa for $5 billion for what it says are excessive card swipe fees.

Credit card firms typically charge 2 percent to 3 percent of the value of each transaction. Retailers paid $66 billion in credit-card-related fees in 2013, out of $4.5 trillion in spending tied to major U.S. cards, according to the Nilson Report.

In contrast to Apple Pay, which encrypts payment data and keeps it out of the hands of retailers, CurrentC connects directly to a customer's bank account. It will allow retailers to glean valuable data on spending patterns, which they can use to better target advertising and drive loyalty programs.

There would be no pooling of data across retailers, Davidson said, and shoppers can opt to remain anonymous. "Consumers will determine how they are marketed to or not marketed to," he said.

MCX says CurrentC will be secure, an assertion that was tested on Wednesday when the group confirmed that hackers had obtained the e-mail addresses of some participants in a pilot program.

While Wal-Mart has said it has no plans to support Apple Pay, its rival Target is taking a more nuanced approach. Target has said it plans to use MCX for in-store checkout but is allowing Apple Pay for online purchases through its mobile app. Target is featured on the Apple Pay website.

MCX members have made up-front payments of $200,000 to $500,000 to join the group and signed multiyear agreements, according to people familiar with contract terms.

MCX said on Wednesday that when retailers join the consortium they do so on an exclusive basis, but there are no fines if they leave the group.

Walgreen Co, a rival to CVS and Rite Aid, said it decided to offer Apple Pay to give its customers more options.

“It is ultimately about providing the choice to customers because no one really knows how this space will evolve,” said Deepika Pandey, head of digital marketing at the pharmacy.