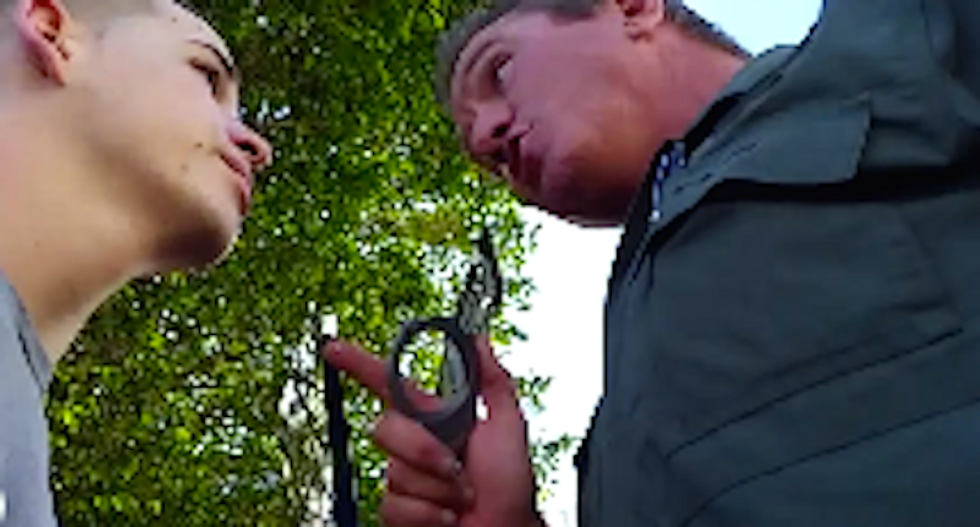 Police have launched an investigation of a Miami Beach officer shown in a viral video cursing at another man during a traffic stop, reported the Miami Herald.

The video clip, posted Monday on YouTube, shows Officer Kenneth MacLeod ending his encounter with Albert Valdes, who said he was stopped and ticketed for having the license plate obscured on his motorcycle.

“Get out of my face before I decide that this might be not the best judgment,” the officer says on the video, and Valdes tells him to “have a great day, too.”

“God bless you,” Valdes replies, and the officer’s demeanor changes.

“You know what? F*ck it, let’s throw your ass in jail,” MacLeod says. “You want to be a sarcastic bitch, I’ll be f*cking a bigger bitch.”

Valdes tells the officer he would like to go to work.

“Then don’t be a f*cking little wise-ass 20-year-old punk,” the officer says, pointing to his badge. “MacLeod’s the name, M-A-C-L-E-O-D -- Scottish spelling. It’s also on the bottom of your tickets if you don’t like it.”

McLeod was shot while in uniform more than 20 years ago during a gunfight, the newspaper reported, on the same day another officer was killed during an ambush by bank robbers.

MacLeod was working off-duty in uniform Jan. 4, 1992, when he offered to help a man walking a motorcycle.

The man opened fire, and the officer required hours of surgery.

Police opened an internal affairs investigation into the incident involving Valdes after seeing the video online.

They said Valdes had not filed a complaint, but the investigation was opened to be “proactive.”

Watch video of the incident posted online by Albert Valdes: