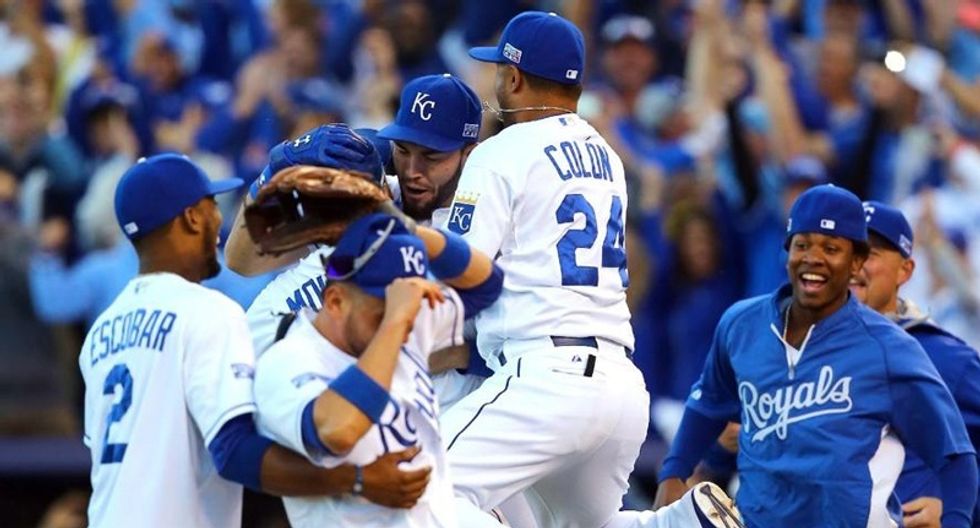 I'm not sure I've ever seen such a perfect example of what makes me hate sportswriting today.

Actually, it's not just today. This isn't going to be one of those "I hate the way Deadspin and other websites are ruining print newspapers" sort of pieces that you expect from some curmudgeonly ink-stained wretch.

In fact, if anything, print newspapers were even worse about this kind of thing.

I'm talking about the extremely stupid article written by David Schoenfield at ESPN's website yesterday, titled "Welcome to the worst World Series ever."

It's a very clever headline, and as someone who spends all day obsessing over headlines for their clickability, I'll give Schoenfield an A-plus for the title of his story.

The problem is, he actually means it -- after 2,430 regular season games and some thrilling postseason contests, we have two teams poised to begin the 107th World Series to determine this year's champion.

So what's Schoenfield's beef? He argues that this particular set of playoffs might not crown the "best" team -- in fact, the Kansas City Royals and the San Francisco Giants, because they are wild card teams, are really sub-par to be crowned champions of Major League Baseball.

Oh, not this crap again.

I honestly wonder why a guy like David Schoenfield even bothers writing about sports. I mean, if you really don't care about who actually wins games, but you only care about which team has the best statistics, why aren't you compiling numbers for a hedge fund, or creating spreadsheets for a timeshare somewhere?

Every professional athlete I've ever talked to -- and I won't snow you, I haven't talked to all that many -- every single one of them made it clear that they cared about only one goddamn thing.

They don't give a rat's ass about what anyone thinks about their batting average or their number of sacks or their free throw percentage. Those things are nice, especially when it comes to contract time. But every talented athlete worth the name only cares about one thing.

And this year, the Kansas City Royals and the San Francisco Giants got the hits when they had to have them, and got the strikeouts when they needed them, and got the lucky hops and the favorable calls and escaped the injuries and held together and avoided all the other bullshit that the press would love to see a team get involved in and screw up their momentum.

The Royals and the Giants are the best teams in baseball because they won the games that needed to be won.

And that's what makes sports compelling, at least to the majority of us. We care about who prevails, not who the sportswriters tell us should end up victorious based on their deep pondering of depth charts and past box scores.

We don't watch sports in order to say, well, my team didn't win, but on paper it was the best lineup in baseball. Or, my team didn't make it to the Super Bowl but clearly it had the superior draft.

Who remembers what teams the sportswriters told us would win the pennant before the first pitch was thrown in April? And why, in October, would we ever give the slightest care? We watch games because we want to see who actually wins, not who the press thinks ought to win.

I have hated this trend for many, many years. And believe me, it was worse with print newspapers than it is now. You have to understand that sports journalists are heavily invested in particular teams. Teams that they spend years involved with so they can get access to key players. Teams that literally feed sportswriters. I'm not kidding. I have, myself, taken advantage of the fine buffet that the home team puts out to make sure all of the sportswriters -- visiting and home -- get a good hot meal before they set out to get quotes from millionaires in short pants.

It's a rough gig.

And without fail, when a team from a minor market wins, we hear this same refrain. In a place like Kansas City, one where the big-city sportswriters don't have so many contacts, and maybe they can't construct a grand narrative about the big-city team's place in history, and they actually have to do some work and figure out why this no-name team with a modest payroll is actually winning -- you know, work that involves some actual research and phone calls -- it's a lot easier just to say that it's a fluke or it doesn't mean as much as a Yankees-Red Sox showdown or a Cowboys-Patriots summit or a Lakers-Celtics classic.

Seriously, when sportswriters lose their perspective, when they can't appreciate that a team in the Midwest with a $92 million payroll -- 19th out of 30 in the major leagues -- is going to the World Series because it hit more home runs in the postseason than it did per game in the regular season, when a sportswriter can't see how much more meaningful that is than some statistical comparison to the batting averages of past years, you have to wonder what the hell that writer is doing with his life.

You don't like that the Royals and the Giants are in the World Series?

They've won the games that matter. And one of them is going to emerge champion. And forever, they'll be the best team of 2014.

If that's a problem for you, sell cars or something.