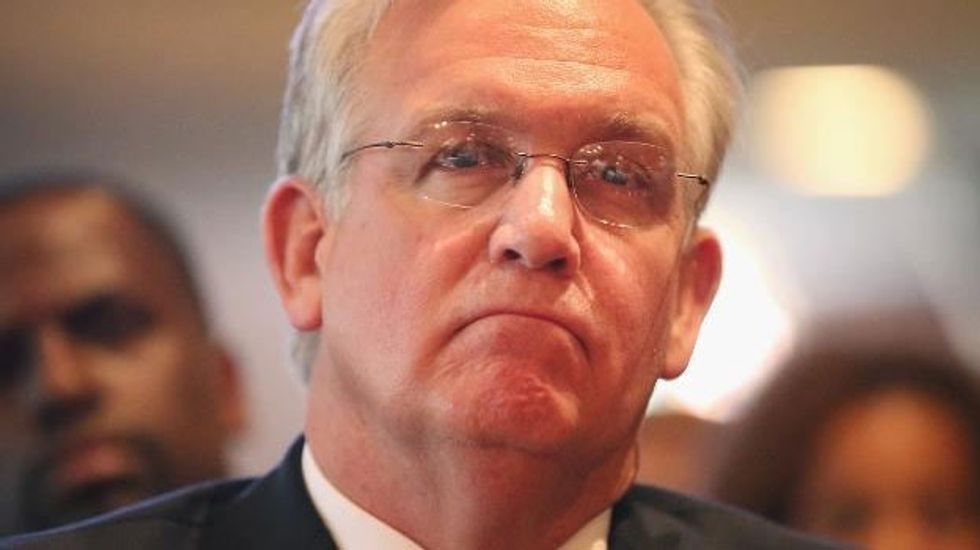 Missouri Governor Jay Nixon listens to residents, faith and community leaders as they discuss unrest in the town of Ferguson following the shooting death of Michael Brown, in Florissant, on August 14, 2014

"Missouri law enforcement continues to try to violate our first amendment rights and silence our calls for justice for Mike Brown," the group's executive director, Rashad Robinson, said in a statement. "But we're strong, we're organized, and we will hold Governor Nixon responsible for allowing the systematic violation of Black Missourians' free speech and human rights."

The St. Louis Post-Dispatch reported that authorities impounded the truck, which carried a billboard saying, "Gov. Nixon: What will you do in this moment with the whole world watching?," saying it was blocking traffic.

Nixon has been repeatedly criticized by residents and activists for not appointing a special prosecutor to investigate filing charges against Officer Darren Wilson, who shot and killed 18-year-old Michael Brown on Aug. 9. Critics have argued that St. Louis County Prosecuting Attorney Robert McCulloch cannot be trusted to deliver a thorough case for Wilson's arrest to a grand jury. The jury is reportedly still hearing evidence.

The driver, who was not identified, was one of three men arrested during the protest. No charges against him were identified, but police said that the truck also blocked an ambulance that had been called into service.

However, Robinson said that, according to witnesses at the scene, the driver was not responsible for his vehicle getting in the way of the ambulance.

"Eye-witnesses say police targeted the driver and emerged from an unmarked police car to quickly pull the driver from the truck before he was even able to undo his seat belt," he said.

The city has been the site of numerous protests since Wilson killed Brown. Authorities have denied recent reports saying they imposed a no-fly zone over Ferguson to quell media coverage of the initial demonstrations. CNN reported on Wednesday that a coalition of local activists has asked for 48 hours' notice before the grand jury reaches its decision.

Watch a report on the protest, as aired on KTVI-TV, below.