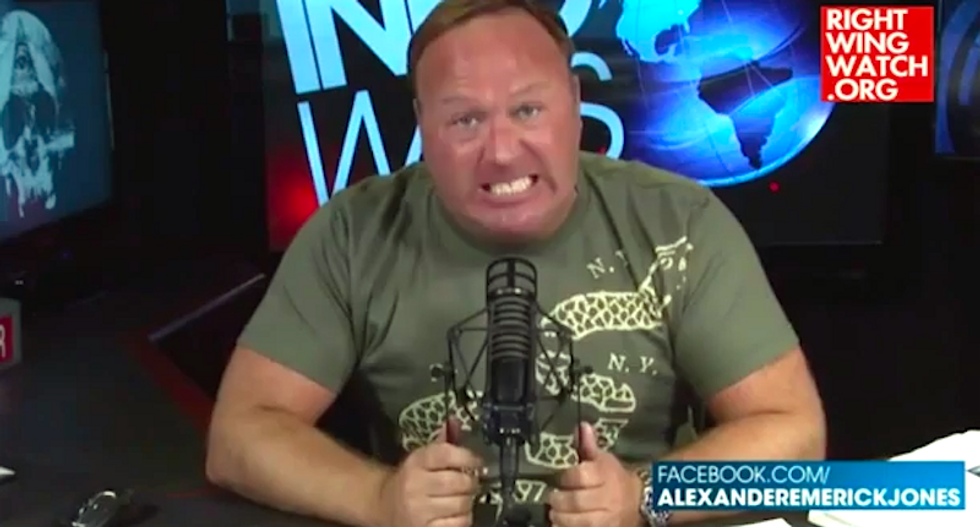 Alex Jones stoked the paranoid fears of his listeners – and left no doubt about whether he was a Republican shill – by warning that net neutrality would lead to censorship of conservative Internet sites.

“This has been the plan for a decade – free-quote-Wi-Fi that’s paid for by taxpayers, but you have no rights on that Wi-Fi, and you can’t get to InfoWars.com or DrudgeReport.com, that the White House officials have said they want to shut down, basically,” Jones warned this week on his radio program. “So this is it, they’re coming.”

Jones, who claims to be nonpartisan, promoted a widely mocked statement by Sen. Ted Cruz (R-TX), who misrepresented the president’s statements on regulating Internet service providers like utilities to claim “net neutrality is Obamacare for the Internet,” reported Right Wing Watch.

“Bottom line, ladies and gentlemen: Obamacare is now moving to the Internet,” Jones said. “Federal regulation and control written for select corporations, right out of the FCC to shut down all of their competition, and Republican leaders – to their credit, have now come out with statements … saying that it is Obamacare for the Internet.”

“That’s what Ted Cruz has come out and said,” the broadcaster said. “I like Ted Cruz, he knows what he’s talking about.”

Jones went on an extended rant, growling and angrily comparing FCC regulators to Mafia henchmen, and warning the government wanted to kill or control all Americans.

“The FCC is going to come in and protect the Internet, ha,” he said. “You like living like that? OK, because you’re about to – a nation of sheep, ruled by wolves, and you beg on your knees to be slaves – all these fat, weak cowards sitting up there on television and tell you they’re lying to your family and tell you they’re going to break your bank and bring you under their filthy control and put you in their government housing pens to run your life and bring you down and imprison your children – and you submit to it with pleasure.”

Jones warned his listeners that allowing consumers to access any website or online service they wish without interference or additional charges from Internet service providers was some type of totalitarian scheme.

“This is just a high-tech version of what the Soviets and the Nazis and the Chinese communists and Fidel Castro and every other nutball did,” he said.