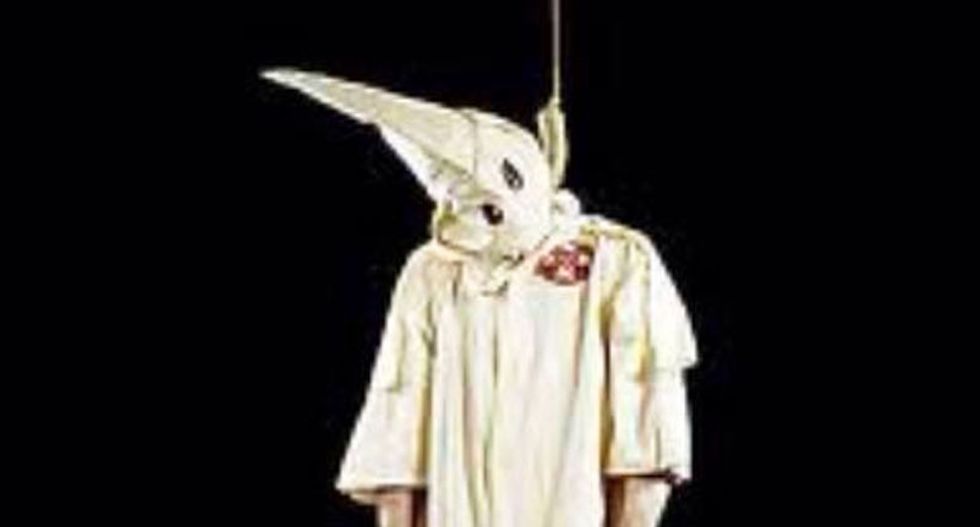 Following a week in which a chapter of Ku Klux Klan threatened to use “lethal force” against Ferguson protesters, the hacker collective known as Anonymous announced Operation KKK (#OpKKK) designed to harass the white supremacist group.

After Anonymous posted photos and personal information, including addresses and job positions, of Klan members living in the St. Louis area on Saturday, the Klan taunted the hacker group on Sunday only to see Anonymous take over their Twitter account two hours later.

Last week, Frank Ancona of the Traditionalist American Knights of the KKK defended handing out fliers in St. Louis calling Ferguson protestors "terrorists," and threatening, “We will use lethal force as provided under Missouri law to defend ourselves.”

According to Ancona, “It kind of came about from hundreds of calls we’ve been getting from residents in St. Louis County concerned with things that they’ve seen on social media. Random attacks on whites, D.C. sniper-style shootings, police officers being threatened that their wives are gonna be raped, and that they’re all targets.”

Responding to the KKK threats, Anonymous tracked down and began posting information about St. Louis Klan members on Twitter -- some of which were collected and posted by Liberaland -- leading the Klan to complain about the invasion of privacy.

On Sunday, they tweeted, "We are continuing to read Anonymous threats with much amusement. Still no action taken. #Cowards #HoodsON."

Two hours later Anonymous had taken over the Twitter account, substituting the Anonymous logo for the Klan logo, and changing the bio to read: "Under anon control as of 16 NOV 2014 09:11:47. You should've expected us."

Anonymous then posted a tweet announcing the takeover (seen below), featuring a lynched Klansman, which has been retweeted over 1,800 times.

Late Sunday night, Anonymous posted another tweet stating: "UPDATE: Anonymous will release a statement on THIS account tomorrow at 03:00 GMT (21 hours from now) regarding the seizing of this account."