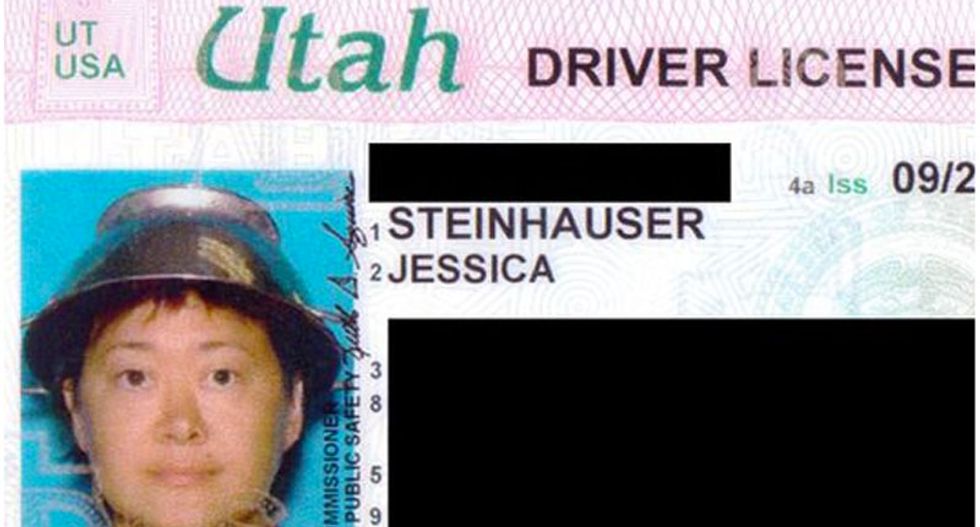 A former adult movie star, claiming membership in the satirical Church of the Flying Spaghetti Monster, was allowed to exercise her religious rights by having her Utah driver's license photo taken wearing a colander on her head.

Asia Lemmon, also known as Jessica Steinhauser and previously known in the adult movie industry as Asia Carrera, became the fourth member of the church and the first in Utah to be allowed to wear the headgear in a license photo, reports The Spectrum.

According to the Church of the Flying Spaghetti Monster, the colander is the official headwear of the  satirical religious movement that mocks traditional religions, with members calling themselves 'Pastafarians.'

Lemmon, who says she is an atheist, said claiming membership in the Church of the Flying Spaghetti Monster was a decision she's proud of.

"I'm a really proud, outspoken atheist," Lemmon said. "I am proud of Utah for allowing freedom of all religions in what is considered by many to be a one-religion state. I wanted to see if I could (wear the colander) in Utah. I wasn't sure if they would let me."

According to the St. George resident, she met with early resistance at the Department of Motor Vehicles in Hurricane but, presented with printed documents backing up her religious freedom, DMV employees took the photo without question.

"It was surprisingly really, really easy," she said.

Not all Pastafarians have had such an easy time posing for a driver’s license photo in their religious headgear. A DMV in New Jersey called police on a man who refused to remove a colander from his head last year.

Bobby Henderson, founder of the Church of the Flying Spaghetti Monster, said in an interview that he approved of the actions of Lemmon and the DMV.

"I think it's nice, and I'm 100 percent sure Asia is doing this for good-natured reasons," he said. "Hopefully, the state of Utah will have a sense of humor about it as well. We are fortunate to have her as a member of the church. She's great."

The Church of the Flying Spaghetti Monster had its genesis in a satirical open letter written by Henderson in 2005, protesting the Kansas State Board of Education's decision to allow teaching Intelligent Design as an alternative to evolution in public schools.

Henderson wrote a letter that satirized creationism by stating a belief that whenever scientists carbon date an object, there is a supernatural creator, closely resembling spaghetti and meatballs, "modifying the data with his Noodly Appendage," according to the church's website.

Henderson says that all are welcome in his church.

"We are not anti-religion," Henderson explains on his website. "We are anti-crazy nonsense done in the name of religion. There is a big difference. Our ideal is to scrutinize ideas and actions but ignore general labels."