Bitter coffee today? Try changing the color of your cup 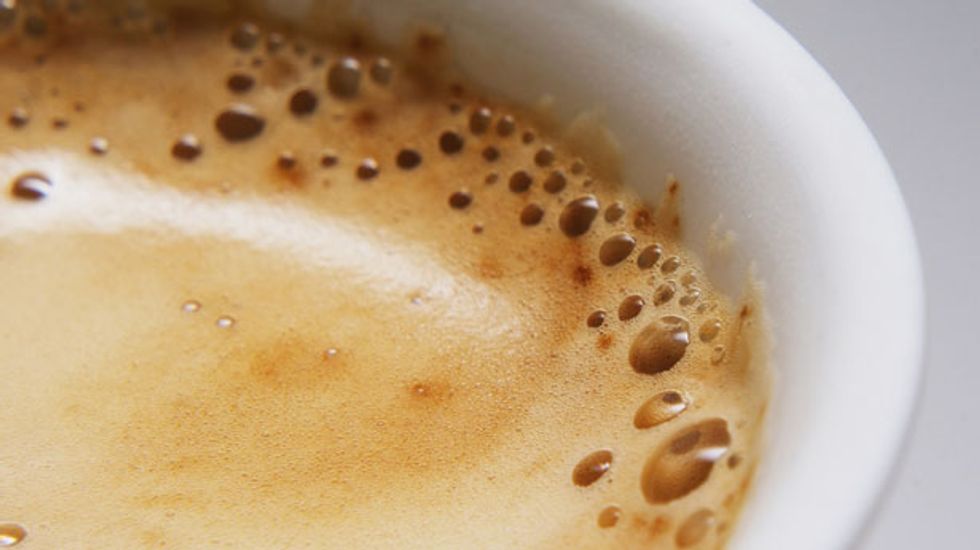 In Australia, around a billion cups of coffee a year are consumed in cafés, restaurants and other outlets. Even Britain, a nation famous for its fondness for tea, has in recent years seen a dramatic rise in its coffee consumption, with an estimated 70 million cups drunk each day.

Given the economic incentive to keep consumers drinking coffee, café owners, restaurateurs, crockery designers and manufacturers will, presumably, be interested in anything that can help to enhance the multisensory coffee-drinking experience for their clientele.

And, in research published last week in the journal Flavour by my colleagues and I, it appears that cup colour plays a big part in the way coffee drinkers perceive the taste of their morning cuppa.

One day, at my local cafe …

The idea behind this study came about serendipitously. A barista once told me that when coffee is consumed from a white, ceramic mug, it tastes more bitter than when drunk from a clear, glass mug. Note that these two mug types are among the most commonly used vessels to serve coffee in Australian cafés and restaurants.

My colleagues and I, then, sought to establish the validity of this claim which, to our knowledge, had not been tested before.

Although many studies have been published on colour-flavour interactions over the years, there is a lack of research on the psychological impact of the cups from which we drink. This paucity is surprising given, as we saw above, how many cups of coffee are drunk every day.

The notion that the colour of the receptacle could impact taste/flavour perception might relate to work by consumer studies researcher Betina Piqueras-Fiszman and colleagues, which showed that a red, strawberry-flavoured mousse presented on a white plate was rated as 10% sweeter and 15% more flavourful than when exactly the same food was presented on a black plate.

Taking the principal one stage further, and given the conversation with the barista, we proposed that brown may be associated with bitterness (or, perhaps, negatively associated with sweetness) and that coffee from a white mug should be rated as somewhat more bitter than exactly the same coffee when consumed from a transparent mug.

This, in turn, would be expected to elevate ratings of bitterness relative to the same coffee when served in a transparent mug.

Some famous examples of the use of this “simultaneous contrast” mechanism are Heinz’s use of a greenish-blue can to set off the red-orange colour of its beans and sauce, and Cadbury’s use of purple packaging to enhance the colour of its chocolate.

In one experiment, the white mug enhanced the rated “intensity” of the coffee flavour relative to the transparent mug – but given slight physical differences in the mugs used, a second experiment was conducted using identical glass mugs with coloured sleeves.

Once again, the colour of the mug was shown to influence participants’ rating of the coffee. In particular, the coffee was rated as less sweet in the white mug as compared to the transparent and blue mugs.

Our study clearly shows that the colour of a mug does influence the perceived taste/ flavour of coffee.

Interestingly, Dutch psychologist Ap Dijksterhuis suggested that because of the use of the word “strong” in advertising, consumers often confuse a coffee’s strength or intensity with its “bitterness”. In our research we found a trend in bitterness ratings that mirrored intensity ratings.

We also found that any reduction in the “sweetness” of the coffee when presented from a white mug might also be expected to increase perceived bitterness (or strength). This supports research (mentioned above) which shows brown, among other colours, is negatively associated with sweetness.

The potential effects may spell the difference between a one-time purchase and a return customer.

George Van Doorn does not work for, consult to, own shares in or receive funding from any company or organisation that would benefit from this article, and has no relevant affiliations.