Deepak Chopra: Richard Dawkins is a fundamentalist 'bamboozled' by logic and rationality 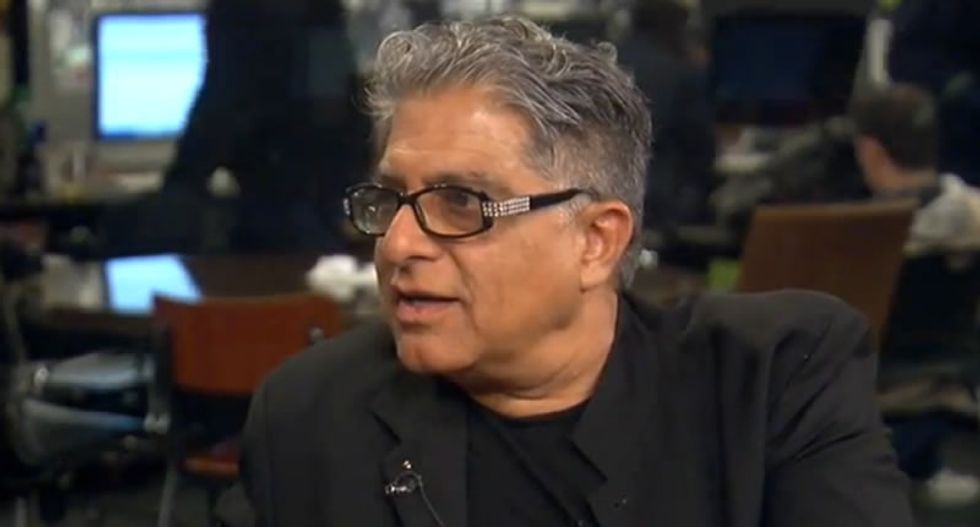 In an interview with HuffPost Live on Tuesday, author and self-proclaimed spiritual leader Deepak Chopra attacked atheist Richard Dawkins for being an "adolescent" in debates about spirituality.

Host Caroline Modarressy-Tehrani began by reading an excerpt from Chopra's book, The Future of God, in which he wrote that "Dawkins has alienated even those who share his atheism because he arrogantly supposes that he took out the patent on rationality. No logic works but his."

"Why do you think his beliefs are so threatening," she then asked, "his militant atheism?"

"It antagonizes people. By the way, I didn’t invent the word ‘militant atheism,’" Chopra replied. "He uses that expression to describe himself, and says if you're not a militant atheist, you're stupid."

"I think [Dawkins] is a fundamentalist," he continued, "just on the other side of the divide. His version of reality is what we call 'empirical reality' -- if you can see it it’s real, if you can’t see it it’s not real. But we know you can’t see your thoughts, feelings, emotions, desires, creativity, choice and they’re real. Your inner world is real."

"In the book," Chopra said, "I talk about the 'visible domain,' then the 'subtle domain' -- which is the rich, inner world that you experience -- and then something that transcends even that, a 'non-local domain' which is the source."

"So, [Dawkins] version of reality is called 'naive realism.' He has no idea of what reality is."

Modarressy-Tehrani then reads Chopra a tweet: "Dawkins' logic is based on evidence? What is your logic based on?"

"Where does evidence come from?" he replied. "Empirical evidence is an expression of our consciousness. If we weren't conscious, we wouldn't experience reality."

"Unless you talk about consciousness," he declared, "you're talking about a rationality that's bamboozled by the superstition of materialism."

Chopra concluded by characterizing Dawkins' position as "the adolescence of spiritual seeking. You start with atheism, because you doubt that there's a deity -- but if you stop there, you haven't grown. You have to question everything, including the experience of the material world."