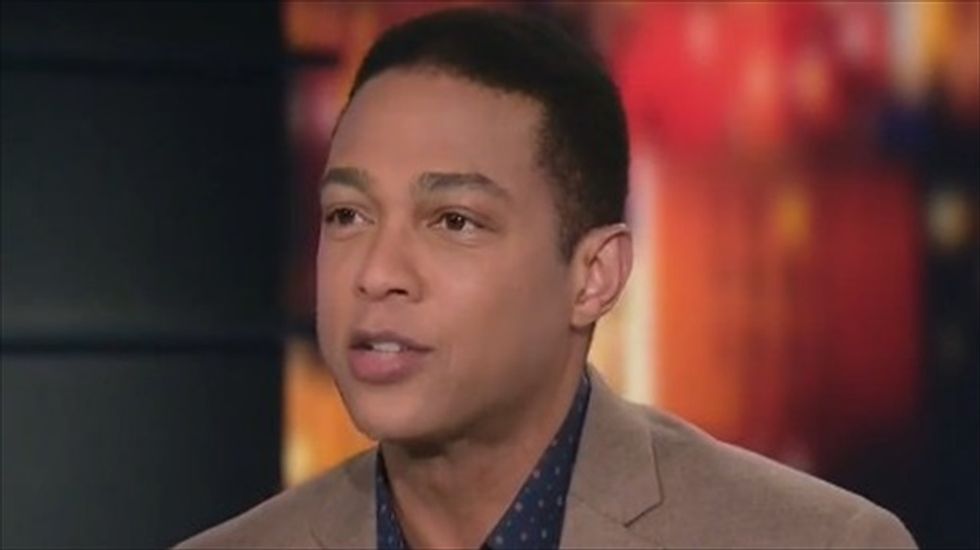 UPDATE: Right After I published the post below, Don Lemon went on TV to apologize for his question: "As I am a victim myself I would never want to suggest that any victim could have prevented a rape. If my question to her struck anyone as insensitive, I'm sorry as that certainly was not my intention."

The apology was so thoughtful and heartfelt, it took all of 14 seconds.

CNN host Don Lemon is being mocked and criticized, and rightly so, for his incredibly victim-blaming interview of a woman who said she was raped by Bill Cosby. What makes Lemon's insensitivity and inappropriateness even more disturbing is the fact that he himself is the survivor of sexual abuse.

Joan Tarshis is among the 15 women who have come forward to accuse Cosby of sexual assault or rape. On Sunday, Tarshis wrote that she had been raped twice by Cosby when she was 19. In one of the incidents, Tarshis tried to dissuade the comedian from vaginally raping her by pretending she had an STI, but that didn't stop Cosby:

... I told him I had an infection and he would catch it and his wife would know he had sex with someone. But he just found another orifice to use. I was sickened by what was happening to me and shocked that this man I had idolized was now raping me.

But Don Lemon wasn't buying it. During an interview aired on CNN on Tuesday, Lemon said,

You -- you know, there are ways not to perform oral sex if you didn't want to do it... Meaning the using of the teeth... As a weapon... Biting.

This is rape-culture and victim-blaming at its finest, a slight twist on the classic, "You were asking for it" or "if you didn't want to get raped, you shouldn't have worn that dress." Here, Lemon is basically saying, "If you didn't wanted to get orally raped, you shouldn't have not bitten your rapist's penis." But what makes Lemon's questioning even more shocking is that he himself has come out as a "survivor" of "sex abuse." In an essay published on CNN, Lemon writes:

I don’t remember exactly when it started for me. It was before the first grade. I must have been 5 years old, maybe 4. My mother was divorced and worked during the day. My grandmother was my sitter. She watched over my sisters and me as much as she could, but even her watchful eye wasn’t enough to keep me out of the hands of my abuser. He was an older teen: the son of one of my mom’s friends. He and two older teen boys, almost in their 20s, preyed on me and some of the younger boys in my neighborhood. The "incidents" - as I referred to in therapy for years - happened up until I was 12 or 13 years old. It was easier for me to call it the "incidents" then because calling it molestation was just too hard, even for me, a survivor of child sex abuse.

Ironically, Lemon criticizes society for refusing to recognize rape when it is not penile-vaginal intercourse. In the same essay, Lemon discusses the case of Jerry Sandusky, the former Penn State football coach and convicted serial child molester:

If the events at Penn State are to teach us anything, it should be that we can no longer turn away from something so ugly just because we struggle to define it or accept it exists. So, let’s just call it for what it is: rape. Rape is what former Penn State football coach Jerry Sandusky is accused of doing to at least one boy in a university shower. But because the victim is a boy, under Pennsylvania law, Sandusky is charged with deviant sexual behavior. If the victim had been a little girl, in fact, the law would call it rape. The acts are the same. So what’s the difference? The difference, according to a friend and former FBI agent specializing in child sex crimes, who is also a survivor of child sex abuse, is that laws are just as antiquated as our feelings. Rape, he says, is typically defined as penile penetration of a female. The same behavior with a male victim is typically defined as sodomy or deviant sexual behavior. In prosecuting cases like Penn State, my friend says, just by definition, the laws unwittingly remove the sting from the accused wretched acts.

But as painful as it is for us, as far removed as we are, no matter how much we may want to put it out of our minds, no matter how much we want to turn away, we cannot and should not. Our inability to view and talk about male and female rape in the same way might have permitted a man to continue his alleged depraved behavior for decades. Rape is rape no matter the gender of the perpetrator or the victim.

Shouldn't Lemon apply the same sensitivity and humanity to Cosby's victims? Does the fact that Tarshis was raped orally and not vaginally, make it less of a rape? Or does it make her more responsible for stopping it?