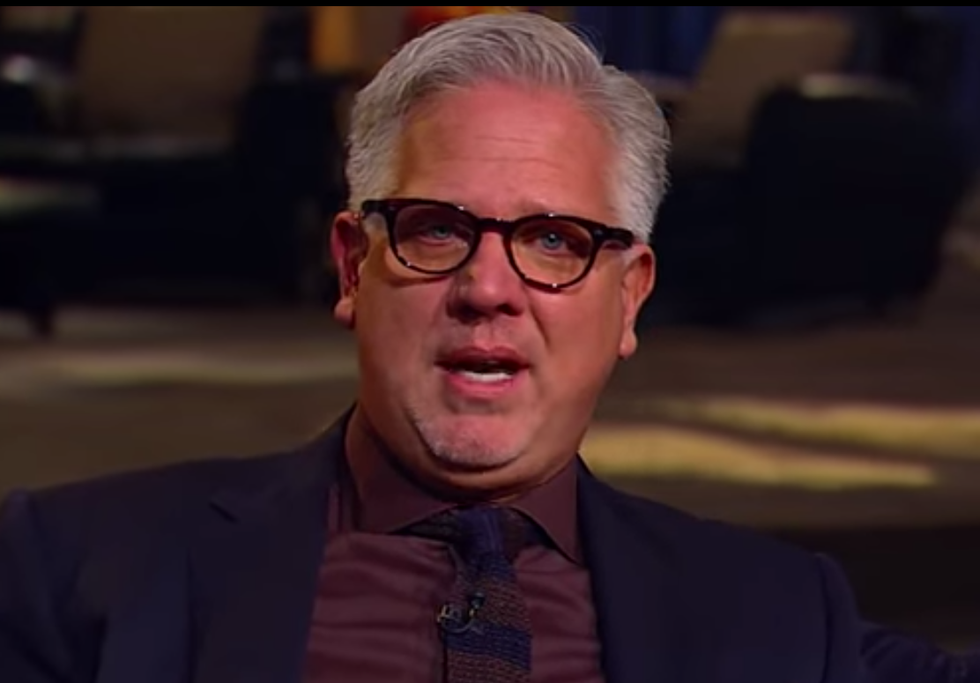 Earlier this week, conservative commentator and erstwhile Fox News personality Glenn Beck tearfully announced to the world that he has been battling for years against a rare neurological disorder.

The illness, Beck said, baffled doctors all over the world, but has now been diagnosed as "adrenal fatigue" by maverick "chiropractic neurologist" Dr. Ted Carrick.

Beck said that the mysterious ailment came on gradually over the course of the last few years, causing him to lose his memory and to suffer seizures, intense pain in his hands and feet and fits of vocal paralysis. He had long bouts of insomnia, mental "fogginess" and a spate of emotional outbursts that he said “quite honestly has made me look crazy.”

Now, after a range of treatments by Carrick -- including being strapped into and spun around in a giant gyroscope -- and an intense regimen of spiritual work and fervent prayer, Beck claims to have a "clean bill of health."

“My brain is back online in a big way," he said Monday.

"Chiropractic neurology" is a controversial branch of medicine that Yale University neurologist Dr. Steven Novella dismissed outright as "pure pseudoscience" in a column from November of 2011.

"Chiropractic neurology does not appear to be based on any body of research, or any accumulated scientific knowledge," Novella wrote. "I am not aware of any research that establishes their core claims. A search on PubMed for 'Carrick T' yielded nothing, and searching on 'chiropractic neurology' yielded mostly studies about neurological complications from chiropractic treatment."

"Chiropractic neurology appears to me to be the very definition of pseudoscience -- it has all the trappings of a legitimate profession, with a complex set of beliefs and practices, but there is no underlying scientific basis for any of it," he concluded.

Raw Story spoke with a representative of Emory Health Care in Atlanta who pointed out that Beck's symptoms do not actually match those typically associated with adrenaline fatigue, which is a syndrome that affects people exposed to high levels of stress over long periods of time.

Adrenal fatigue patients are typically treated by a nephrologist, she said, because the adrenal glands are located directly atop the kidneys, or an endocrinologist. Symptoms of adrenal fatigue are mostly limited to a deep tiredness that sleep doesn't help and mental fogginess.

New York psychiatrist Dr. James Halper pointed Raw Story to the work of Dr. Todd B. Nippoldt of the Mayo Clinic, who wrote, "Adrenal fatigue is a term applied to a collection of non-specific symptoms such as body aches, fatigue, nervousness, sleep disturbances and digestive problems. The term often shows up in popular health books and on alternative medicine websites, but it isn't an accepted medical diagnosis."

"It's frustrating to have persistent symptoms your doctor can't readily explain," said Nippoldt. "But accepting a medically unrecognized diagnosis from an unqualified practitioner could be worse. Unproven remedies for so-called adrenal fatigue may leave you feeling sicker, while the real cause -- such as depression or fibromyalgia -- continues to take its toll."

Many of Beck's symptoms, however, are common to patients suffering from panic disorder.

Most people are aware of common symptoms of panic; increased heart rate, shortness of breath, a sense of impending doom and an irrational and escalating sense of alarm. However, in extreme cases, the anxiety of a panic attack can be so intense that it develops into what are known as psychogenic non-epileptic seizures.

The website for the Comprehensive Epilepsy Center at NYU's Langone Medical Center explains that these types of seizures are "the result of subconscious mental activity or distress. It is not the result of abnormal brain electrical activity."

However, "(t)he person is usually unaware that the seizures are not epileptic. Nonepileptic seizures most often resemble complex partial or tonic-clonic seizures. The degree of resemblance varies considerably, often making diagnosis difficult."

People suffering from panic attacks can experience all of the symptoms of epilepsy or other seizure disorders, as well as experiencing numbness, tingling and pain in the extremities, feelings of unreality and depersonalization, memory loss and other symptoms described by Beck.

People who suffer from panic disorder typically see between 10 and 20 medical practitioners before receiving an accurate diagnosis. Because the symptoms can so often mirror illness of the heart, brain and lymphatic system, the syndrome often goes undiagnosed.

And patients, Novella noted, typically have an incorrect sense of what constitutes a diagnosis. Identifying any illness is a process of elimination. Physicians can generally offer what is called a "differential diagnosis" that includes whatever they have not ruled out that seems the most likely, "even though there is no smoking-gun evidence for a single diagnosis. There are also often diagnoses that can’t be ruled out by any test, and so they remain on the list."

Novella is extremely skeptical of Beck's narrative and believes that if Beck is going to use his version of his medical narrative to make a point, then he should disclose his medical records to the public.

In a conversation with Raw Story, Novella said, "If you're going to use your personal medical history as a public figure in order to make a point, then I think you're obligated to make your medical record public."

The doctor is skeptical of Beck's desire to "have it both ways, saying, 'I'm going to use this publicly to make a point, but nobody else should look at this information because it's privileged and it's private. Well, you've just made it no longer private."

"I care about this because I'm a physician," Novella explained, "and he's promoting a dubious diagnosis and a dubious practitioner and we have absolutely no way of knowing if anything he's saying about his own medical history is accurate."

When asked if he believes that Beck could be making this up out of whole cloth in an effort to make himself seem less erratic and hasten the sale of his network Blaze-TV to a major cable provider, Novella refused to speculate.

"I wrote my article giving him the benefit of the doubt," Novella said. "In my opinion, he hasn't demonstrated himself to be a particularly honest broker of information, but that's not what I wanted to write about. I don't care about Glenn Beck, my blog is not political."

"Assuming that he's sincere, this is still a huge problem," he said. "It all sounds pretty dubious," said Novella, but it's difficult to discern whether it's because Beck is being disingenuous or if it's because Beck is "a layperson trying to interpret their own medical history, which he's done a terrible job of."