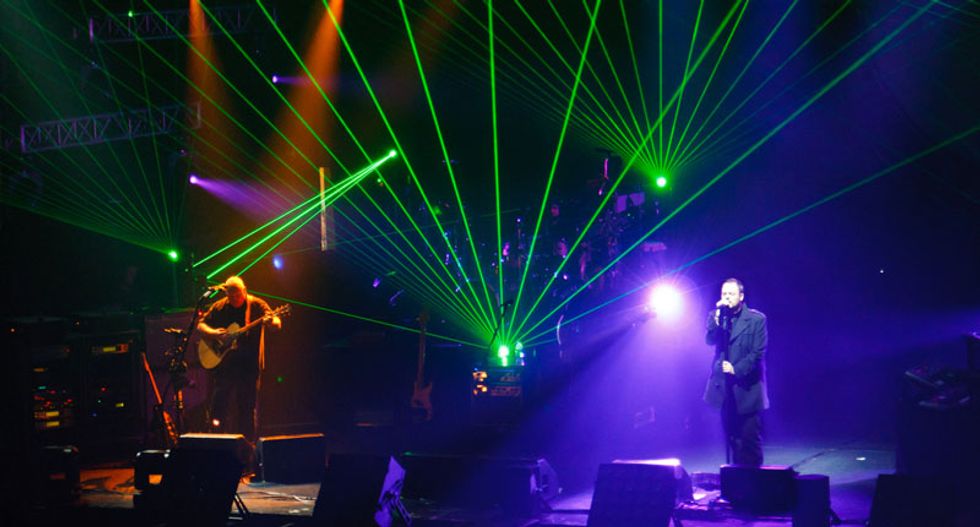 For a band that once sang “Every year is getting shorter / Never seem to find the time” – which followed an explosion of alarm clocks – Pink Floyd’s songs always seemed to take their time.

During the band’s early years, they incorporated interminable psychedelic jams into R&B covers, entertaining the chemically altered audiences of London’s underground scene by keeping their songs spacious and long. Over the years, lengthy intros, solos, and outros became an integral part of the Floydian flair. These were joined by slow tempos and a crawling harmonic pace. Some chord progressions in the Floyd corpus last more than 50 seconds.

As a result, Pink Floyd’s music often creates the sensation that time itself is slowing down. “Shine On You Crazy Diamond” (26 minutes), “Echoes” (23) and “A Saucerful of Secrets” (12) are all invitations for listeners to put life on hold and immerse themselves in the sound.

It is only appropriate, then, that Pink Floyd’s professed last release is an album of expansive instrumental music (save for the last track) titled The Endless River. True to its name, there is something timeless about the album: it gleans material from the 1960s (when the track “Autumn ‘68” originates), the 1990s (most tracks come from recording sessions of 1994’s The Division Bell), and the 21st century (when it was revised and released). It also bridges the dead and the living by mixing recordings of keyboard player Richard Wright – who passed away in 2008 – with new layers played by his former bandmates, David Gilmour and Nick Mason.

In its musical vocabulary, it echoes sounds, chords, and riffs from Pink Floyd’s 1970s era. Fans and critics can even reminisce, linking beats from the album to songs from the band’s entire catalogue.

But above all, it is the musical syntax of the new album that takes the slow pace of Pink Floyd’s music one step further and brings time to a halt.

The Endless River offers little of the thematic organization that most rock albums have. Many of its songs have no lyrics to punctuate their flow, nor memorable instrumental themes such as the two harmonizing guitars in “Dogs,” the 4-note motif in “Shine On You Crazy Diamond,” or the metal-pastiche riff of “In The Flesh.”

The tracks lack the polish that songs from earlier albums received after being rearranged and revised in the studio over many months. Instead, this album captures a distinct moment in the Floydian creative process – just before a spontaneity of the jam session gets transformed into a cohesive piece of music.

The harmonic streams in Pink Floyd’s earlier songs such as “Us and Them,” “Shine On,” and “What Do You Want from Me” are all exceptionally slow, but they are not endless; the lengthy chord progressions in these pieces all share a strong sense of narrative direction. The underlying harmony throughout The Endless River’s “It’s What We Do,” “Sum,” “Unsung,” “On Noodle Street,” and “Eyes to Pearl,” on the other hand, alternates between a mere two chords. A popular Floydian device for jamming (e.g., “Echoes,” “Atom Heart Mother,” and the jams that inspired Dark Side of the Moon), this harmonic pendulum offers a soothing and meditative experience that leaves listeners in one place, rather than taking them on a journey to another. The drums in the track Skins highlight this motionless pondering.

In terms of melody, the album is naturally abundant with electric guitar leaks and keyboard riffs. But while David Gilmour’s iconic solos in “Money,” “Dogs,” and “Comfortably Numb” convey clear linearity and his riffs are largely responsible for the momentum of the epic “Shine On,” the guitar work in The Endless River’s “It’s What We Do,” “Sum,” “Allons-y (1),” and “Talking Hawkin'” concentrates on short fragments instead of complete melodies.

Gilmour’s unmistakable sound in “Surfacing” and “Louder Than Words” is as expressive as always, but his solos there have much less of the tension contained in his earlier work: phrases tend to avoid dissonances and land on the most stable and expected places. In several tracks melodies float on top of each other, creating a textural tapestry in place of a single goal-oriented solo. All of this results in a static, shimmering impression that – for better or for worse, depending on the listener’s taste – lacks direction.

For almost half a century, Pink Floyd has been challenging the way we experience time. Absorbing The Endless River from start to finish – the way the band intended – manipulates our perception of time, at moments making us forget that it exists.

At today’s frantic pace, when most music is consumed on the run, between the pressures of time and money, The Endless River is a subtle reminder to stop, relax and breathe in the air.

Gilad Cohen does not work for, consult to, own shares in or receive funding from any company or organisation that would benefit from this article, and has no relevant affiliations.