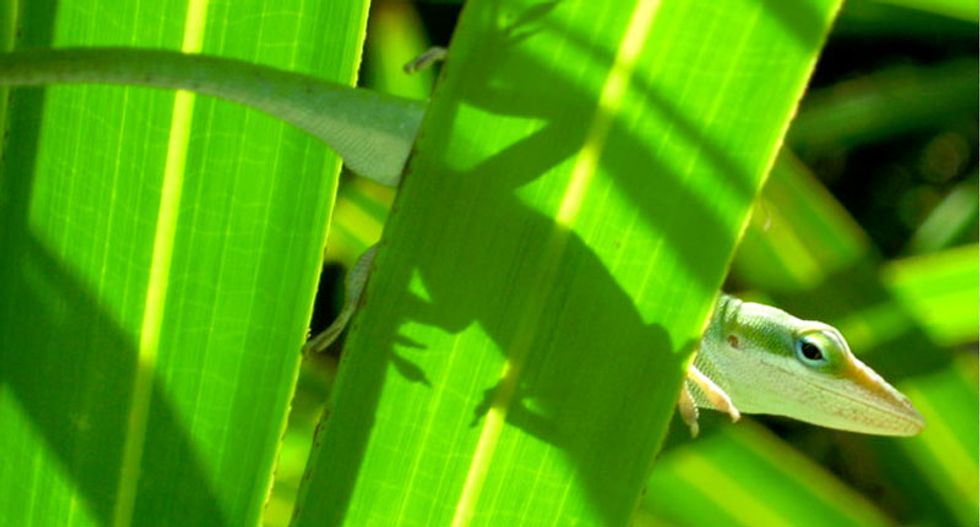 Invasive species colonize and spread widely in places where they are not normally found. Invasives often affect native species by eating them, out-competing them and introducing unfamiliar parasites and pathogens. For example, the invasive Kudzu plant, native to southeast Asia, overgrows seemingly anything in its path in the southeast US.

Natural selection wrought by invasive species can often be strong and natives will either go extinct or adapt. During adaptation, selection will favor those individuals with characteristics that best allow them to survive and reproduce in the face of the invader. The offspring of the survivors will inherit their parents' beneficial traits, and the population will evolve.

Invasive brown anole male, perched and extending a flap of skin called the dewlap. It uses the dewlap to communicate during territorial and mating interactions.

In the 1950s, the brown anole lizard, Anolis sagrei, arrived in south Florida from Cuba. It quickly boomed to become arguably Florida’s most abundant vertebrate by biomass. The effects of this invasion might not be very noticeable to humans (though their cats have paid rapt attention). But the brown anole certainly makes an impression on Florida’s only native anole species, the green anole, Anolis carolinensis.

This is because the green and the brown anoles enjoy similar lifestyles. They are similarly sized, both active during the day and both defend territories. They eat similar food – mostly insects and spiders – and use similar habitat – the ground and lower parts of trees and bushes. Because of these similarities, we expect the invasive brown anole to impose strong natural selection on the native green.

Thus, my colleagues and I asked: how is the green anole responding to the brown anole invasion?

Researchers before us had observed that green anoles living with brown anoles tend to live higher up in the trees, presumably to escape competition for food and space. Definitive evidence required an experiment. So we got to work on small, man-made islands near Cape Canaveral.

Fifteen years later, my colleagues and I wondered whether the green anoles had adapted anatomically to their new life up in the trees. We were specifically interested in toepads on their feet; other anole species that live high in trees tend to have large toepads, the better to grasp smoother, narrower branches higher up.

Yoel Stuart attempting to snare a lizard in a buttonwood tree.

Using little lassos on the end of fishing poles, we captured green anoles. At our field station, we anesthetized them and took digital scans of their toepads. Then we let the lizards wake up and recover overnight, and we released them the next day at the spot we caught them. We often wondered whether their friends believed their abduction stories.

Anesthetized green anole on the flatbed scanner, having its toepads imaged.

We found that on the invaded islands, green anoles evolved larger toepads. It took only 20 generations – less than 15 years – for the toepads to increase by about 5%. That may not sound like much, but that’s a rapid evolutionary pace. For comparison, if the American population was evolving to be taller at that speed, the average height of American men would be seven inches taller in 20 generations. Our findings further support the notion that when natural selection is strong, evolution can proceed quite quickly.

Why did selection favor larger toepads? Like geckos, anoles' toes have specialized scales with fine hairs on them that cling to surfaces. Anoles with larger toepads are better at clinging. We think that the green anoles were under selection to get better at maneuvering on narrow, flexible and slippery twigs and leaves high in trees. Thus, green anole hatchlings that were born with larger toepads were better able to grow, survive, and reproduce. They passed their genetic traits on to the next generation.

In this case, it appears that the green anole has been able to adapt to coexist with the brown anole. It will not be going locally extinct any time soon. We’ll just have to look up to find it.

By Yoel Stuart, University of Texas at Austin

Yoel Stuart received funding from the National Science Foundation to complete this work.

Conservative activists are challenging the eligibility of tens of thousands of voters under a law passed last year by the Republican-controlled state legislature.

In-person voting starts Oct. 17 in Georgia, where Democrat Stacey Abrams is challenging Gov. Brian Kemp in a rematch and Republican Herschel Walker is battling Sen. Raphael Warnock in a race that could determine which party controls the U.S. Senate, and voting rights activists say conservatives are trying to purge the voter rolls, reported CNN.