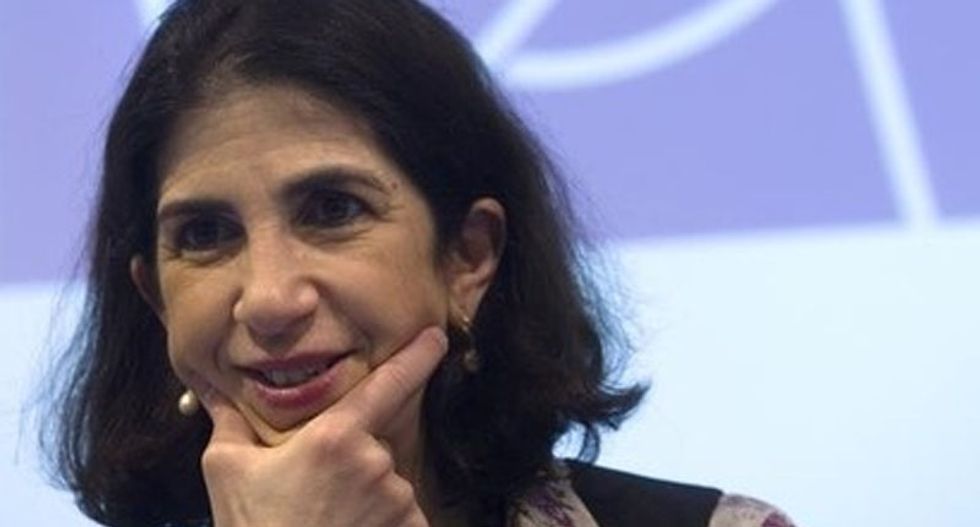 Fabiola Gianotti smiles during a news conference at the CERN (European Organisation for Nuclear Research) in Meyrin, near Geneva December 13, 2011. REUTERS/Denis Balibouse

Italian physicist Fabiola Gianotti was chosen on Tuesday to head the CERN particle physics research centre that houses the giant LHC "Big Bang" machine, making her the first woman nominated to lead a top global scientific institution in the field.

Gianotti, who won world attention in 2012 for her leadership role in CERN's discovery of the long-sought "Higgs boson", will take up the post in January 2016 as scientists there look to new findings on the origin and make-up of the universe.

Her appointment was decided at a meeting of the center's ruling council, made up of representatives of its 20 member states, a CERN announcement said. It remains to be formalized at a further meeting in December.

Gianotti, 52 and a researcher at CERN near Geneva since she joined it with a doctorate from the University of Milan in 1987, will replace Rolf Heuer, who steered the centre through the initially-troubled launch of the Large Hadron Collider.

The machine was primarily built to find the Higgs -- a theoretical particle and related energy field which was thought to have made formation of the physical universe possible by converting matter into mass.

In the LHC, now awaiting relaunch with twice the power in spring next year, elementary particles are smashed together at close to the speed of light, creating billions of tiny "Big Bangs" and their aftermath.

Gianotti in 2009 became project leader of the Atlas collaboration, one of the two major teams working separately to spot the Higgs in the LHC data.

With her counterpart from the CMS team, she detailed the finding of the Higgs -- named for the British physicist who predicted its existence in 1964 -- before a global television audience in July 2012.

The discovery brought a Nobel Prize in 2013 for Peter Higgs, the British theorist, and Francois Englert, a Belgian physicist working on the same idea with two other colleagues in the early 1960s and who also posited the existence of the boson.

Gianotti, an accomplished pianist who once considered devoting her life to music, said she was honored to be named to head the sprawling institute -- which links some 10,000 scientists on site and around the globe -- along the Franco-Swiss border outside Geneva.

"CERN is a centre of scientific excellence and a source of pride and inspiration for physicists from all over the world, a cradle for technology and innovation, and a shining concrete example of scientific cooperation and peace," she said.

When collisions in the LHC are resumed, scientists will be looking for evidence helping to resolve other major questions including the dark matter thought to make up about a quarter of the universe and dark energy accounting for some 70 percent.