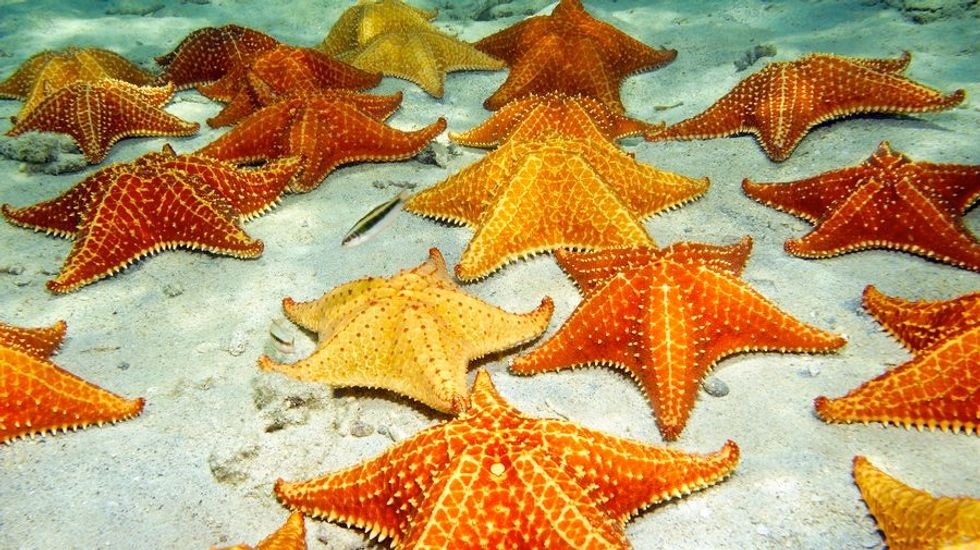 We live in a time when our climate is warming more rapidly than ever before. Rising temperature and associated changes in weather are driving shifts in the distributions of species on Earth. Some are thriving in these new climate conditions and have even moved into new regions that were historically inhospitable. One concern for us humans is how harmful species – diseases or pests – are responding to a changing climate.

An example is the malaria parasite, which is transmitted to humans by tropical mosquitos. In the western highlands of Colombia, malaria is slowly creeping upwards in elevation as the climate warms. But these diseases don’t just directly harm humans. Some species of wildlife are being infected by diseases that are thriving in a warmer climate? Should we be concerned?

In the spring of 2008 I first started noticing that large ochre sea stars (or starfish) known as Pisaster were literally turning to ooze on the western coast of Vancouver Island – both on beaches and in experimental aquariums.

It was a gruesome sight. Symptoms of wasting started with lesions or bulging of the tissues, and in some cases, the arms even dropped off. I tried anti-fungal and bacteria agents, and even tea tree oil, yet the only way that I found to control the disease was to move infected animals to cooler temperatures.

What struck me at the time was how rapidly wasting spread among my animals, with death the ultimate outcome, all in the span of few days. In particular, I found that outbreaks occurred when animals were exposed to temperatures that were warmer than they were used to.

In a scientific study where I reported these results with my collaborators, I suggested that this “sea star wasting disease” could be triggered by changing climate conditions and even lead to large-scale outbreaks.

A virus is the likely culprit

Starting in early summer of 2013 starfish starting dying in massive numbers. Dozens of sea star species were affected and millions of individuals were wiped out along the entire Pacific coast of North America – an exceptional event that captured international media attention and puzzled scientists.

A new study published in the Proceedings of the National Academy of Science has exposed the culprit. The authors present compelling evidence that a virus (Parvoviridae) is responsible for the wasting disease – they were able to infect healthy sea stars with the virus, which then leads to wasting symptoms. They also found that the virus is common in the sea star’s environment, and is even associated with urchins, distant cousins of sea stars. But perhaps more intriguing, the authors identify the virus in museum specimens dating back to 1942.

No, not a badly cooked steak – wasting disease really does turn sea stars into goo.

This paints the picture of a virus that can spread outside its host, that is not particularly picky about which host it infects, and that has been living with sea stars for over seven decades without causing the large-scale mass mortality of the past two years.

Where do we go from here?

While implicating a virus as the likely cause of wasting disease is certainly a commendable achievement, we still don’t know why such a large number of sea stars over such a wide geographic area have succumbed to this disease. Has the virus changed to be more virulent, or deadly? Perhaps something in the environment has shifted, increasing the prevalence of this disease agent or its spread within wild populations. Is this disease outbreak somehow related to climate change?

While we can’t answer these questions now, the scope and scale of the wasting outbreak in sea stars is unprecedented and suggests a need to pay attention to wildlife diseases – especially because many species exposed to warmer temperatures than they are adapted to are weakened and become more vulnerable to disease.

It is important to take heed of the speed and aggressiveness with which such a disease can spread and dramatically alter ecosystems as well as the potential to impact humans more directly. Marine diseases can infect species that we depend upon for food or other resources, or even cause illness in humans such as has been observed with the Vibrio virus, which is spreading north through Europe.

A future with fewer sea stars?

Increasing outbreaks of wasting disease in sea stars will probably lead to dramatic changes in our shorelines. Sea stars feed on algae and other marine invertebrates, helping shape the ecosystem in which they live by what they eat.

This role for sea stars was made famous by Pisaster, the original keystone species, so named because it feeds on mussels along the shoreline, preventing the mussels from taking over and creating habitats for many different species. Populations of these sea stars have vanished in the past year and we are left to wonder about the ecological outcomes.

Knowing what agent is responsible for this disease may lead to strategies to mitigate its further spread, and hopefully, to reverse the decline of starfish in the northeast Pacific. As well, scientists and managers may be able to learn how best to both detect and respond to future marine diseases.

By Amanda Bates, University of Southampton

Amanda Bates does not work for, consult to, own shares in or receive funding from any company or organisation that would benefit from this article, and has no relevant affiliations.