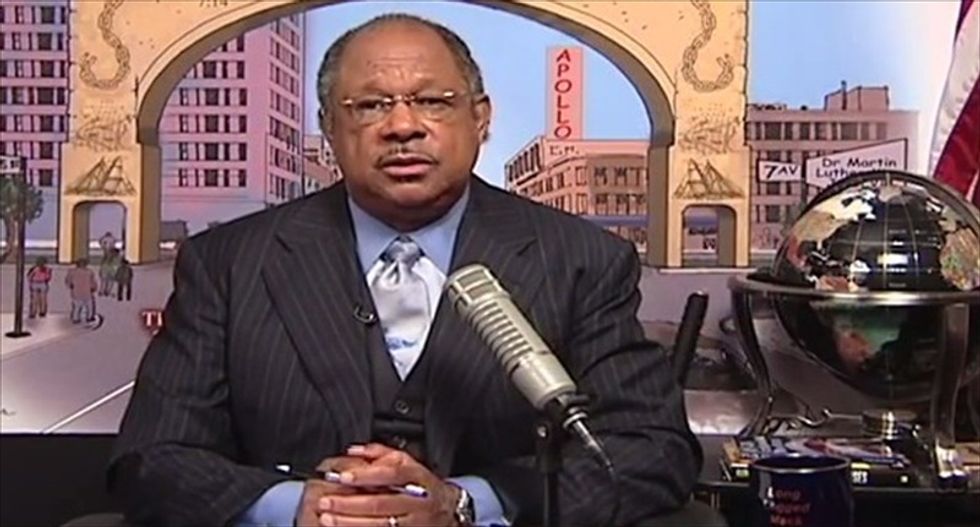 An anti-LGBT pastor based out of Harlem tried to push a fake claim on Wednesday that the Starbucks coffee shop chain was taking semen from "sodomites" and putting it in their lattes.

"My suspicion is that they're getting this semen from sodomites," Pastor James David Manning said on his online radio show. "That's what my suspicion is. My suspicion is that semen, like cord blood, has millions and millions of little zygotes in it, and it flavors up the coffee. And it makes you think you're having a good time drinking that cup of latte with the semen in it."

Manning argued that the accusation was legitimate because it had been covered by The Inquisitr. But he did not mention that the article in question actually debunked a fake story first posted on the satirical site Huzlers.com.

He then claimed that the story was the reason he was criticized for calling the company "ground zero for Ebola," calling their clientele "generally upscaled [sic] sodomites" who go there to "exchange a lot of body fluids."

"Now I know why I don't go to Starbucks," Manning said. "But now I know why these other untoward types hang around that Starbucks. This investigation has not been closed as of yet."

He also complained that protesters went to his ministry, the ATLAH Worldwide Missionary Church, bearing signs saying "no time for hate" and carrying Starbucks "paraphernalia" in response to his claims. Manning responded by predicting that no "public sodomites" would be seen in Harlem within a matter of days and that the popular coffee company would close.

"Starbucks will be found to be perverting its customers and perverting human sexuality," Manning boasted. "As if drinking Starbucks is some sort of a sacrificial ritual bath where they kill the innocent babies and drink their blood in some of these meetings that are had by these fraternal or sorority groups. Starbucks has, for years, been using sexual fluids to prosper at their businesses, and the truth is now coming out."

Watch Manning's bizarre claims, as posted online on Wednesday, below.