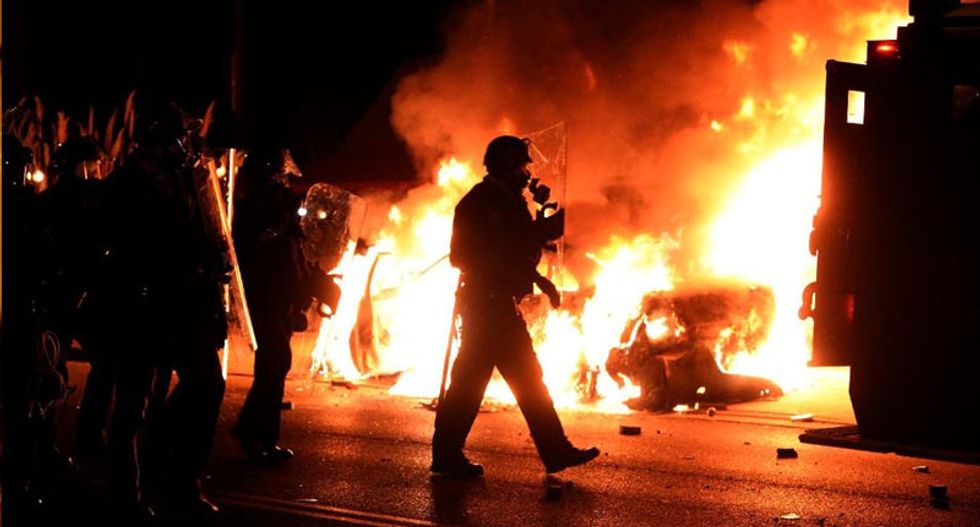 The Oath Keepers gun rights group is seeking volunteers to patrol Ferguson to guard against looting and vandalism.

The militia-style group sought veteran police officers and firefighters, HAM radio operators, truck drivers, photographers, and “direct action infantry” with their own body armor and other tactical gear to volunteer for the overnight patrols.

At least 10 members so far have traveled from as far as Iowa to the Missouri town, reported Sky News, where months of simmering protests exploded Monday night after a grand jury declined to indict Officer Darren Wilson in the shooting death of 18-year-old Michael Brown.

"The people of Ferguson have learned a sad and difficult lesson, that there aren't enough police and National Guard to help police all the homes and businesses,” said Sam Andrews, who organized the Oath Keeper patrols. "When you see a militarized police force and angry citizens who choose to be violent it becomes a very volatile and dangerous situation."

Andrews, who was carrying a handgun and military-style rifle fitted with a silencer, told Sky News his group was prepared to use lethal force to protect property.

The Oath Keepers are made up of law enforcement officers, firefighters, current and former military, and other first responders who have vowed not to enforce gun laws and others they deem to be unconstitutional – and they urge others to do the same.

They urged volunteers to focus on looters and law-breakers, rather than bullying media and protestors.

“We need officers to put violent criminals in jail, not shoot tear gas and rubber bullets at reporters too ignorant to not shine lights in the officers’ eyes while they are trying to work,” the group said.

The Oath Keepers harshly criticized Democratic Gov. Jay Nixon’s response to the protests, which they described as “riot control tactics” that violated the demonstrators’ constitutional rights.

“With hundreds of criminals stealing the businesses of Ferguson blind and damaging private property, how many arrests of actual looters took place?” the group said. “The percentage is embarrassing (and arrests of otherwise peaceful protesters for ‘failure to disperse’ or ‘failure to keep moving’ don’t count).”

EDITOR'S NOTE: An earlier version of this story included a reference to a St. Louis County police officer, Dan Page, who was suspended after he described himself as a Christian and a killer at an Oath Keepers event in 2012. The story referred to Page as a member of Oath Keepers, but the group's president, Stewart Rhodes, says that although Page spoke at the event, he has never been a member of Oath Keepers. Raw Story regrets the error.