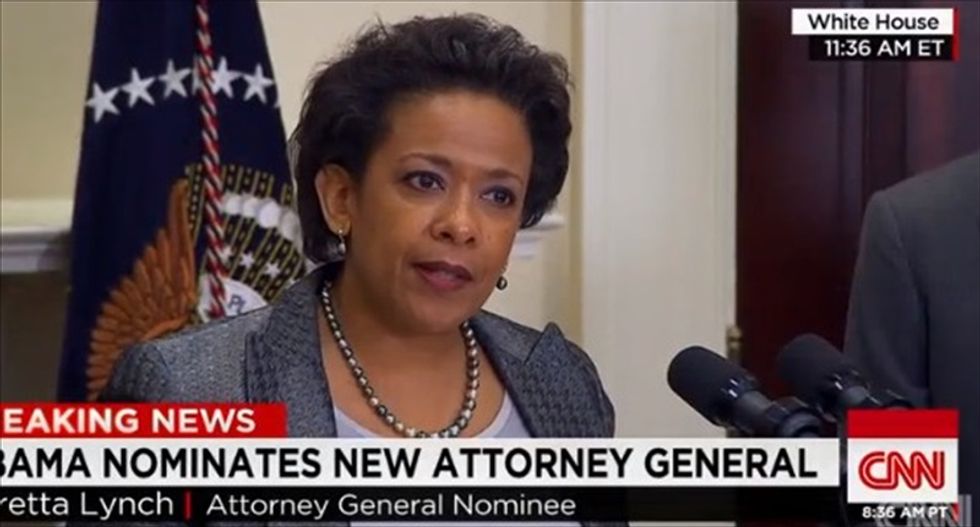 President Barack Obama on Saturday picked Brooklyn federal prosecutor Loretta Lynch to be the next U.S. attorney general, praising her as someone who would bring a commitment to criminal justice reform and other key administration priorities.

If confirmed, Lynch, 55, would be the first black woman to serve in the post, bringing with her a family history that stretches back generations to great-great grandparents who were slaves.

Obama said he hoped the Senate would confirm Lynch, who he said had distinguished herself as tough and fair in her two stints as the U.S. attorney in the Eastern District of New York, which covers Brooklyn, Long Island, Queens and Staten Island, without delay.

Lynch would replace Eric Holder, the first black attorney general, who has held the job since Obama took office in 2009. She was among several candidates Holder had recommended to succeed him.

"Loretta might be the only lawyer in America who battles mobsters and drug lords and terrorists and still has the reputation for being a charming people person," Obama said in announcing the nomination.

The announcement, made in the White House's Roosevelt room, was unusual both for its timing and for Obama's selection of someone for a top job with whom he has little personal history.

The White House had planned to announce the selection later this month after Obama returned from his trip to Asia but the timing was moved up after her selection leaked out to the media.

The president leaves on Sunday for a trip to China, Myanmar, and Australia.

Holder announced earlier this year that he was stepping down. Lynch's nomination is the first big personnel change Obama has announced since Republicans won control of the Senate in congressional elections on Tuesday.

Watch footage from Obama's press conference announcing Lynch's nomination, as posted by CNN on Saturday, below.