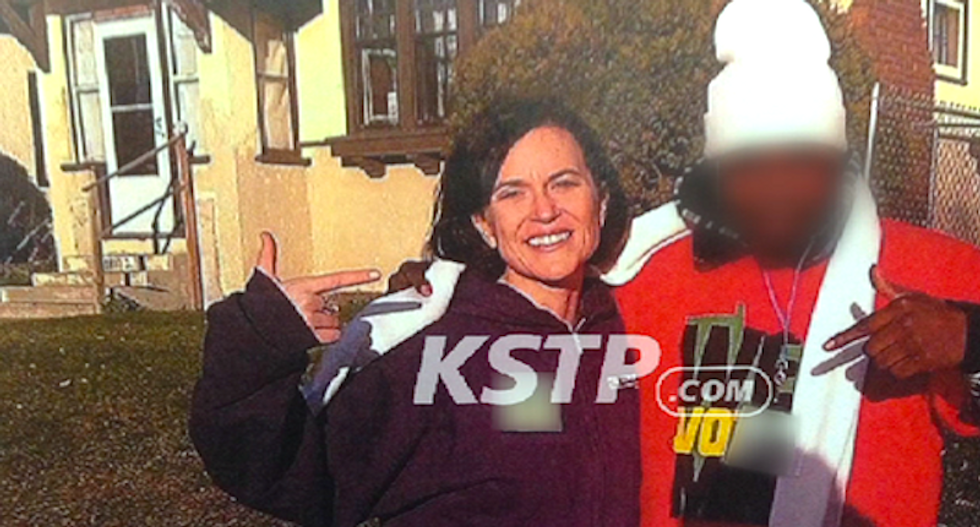 Twitter users are mocking a TV report that passed on complaints by law enforcement officers that Minneapolis Mayor Betsy Hodges flashed a gang sign while posing for a photo with a man as she campaigned.

Law enforcement officers found the photo, which was taken last week, on the man’s Facebook page while doing investigative work and passed it along to KSTP-TV reporter Jay Kolls, the station reported.

The photo shows Hodges and the man, identified by Daily Kos as Navell Gordon, standing side by side closely and pointing toward one another with their index finger and thumb extended.

The man's face is blurred out in the photo posted online by the station, along with -- oddly -- the last two letters in the word "vote" on his T-shirt.

The mayor’s office said Quinn and the man were simply pointing at one another as she campaigned on the city’s North Side, but a retired police officer said the gesture is used by gangs in the neighborhood.

Gordon, who has been convicted on drug and firearms charges, was recently sentenced to five years in prison, but the term was suspended for three years while he is under supervised probation.

Kolls admitted in his report that he cannot prove Gordon is a gang member, but Media Bistro reported that he cited unspecified sources – identified only as "they" – who "say he has connections to gang members.”

That line has apparently been edited from the current version posted online by KSTP.

Critics have blasted the story as racist, poorly sourced, and flat-out bogus, posting photos on Twitter of various people making similar gestures, along with the hashtag #PointerGate.

“Rather than celebrating the young man’s involvement in civic engagement, the media decided to replay an age-old narrative of stereotyping a young black man from the inner city and branding him as a gang member,” wrote Levy-Pounds, a professor at the University of St. Thomas Law School. “Because of the mayor’s willingness to reach into the community and build connections, she too, was labeled in a similar manner and accused of having gang affiliations.”