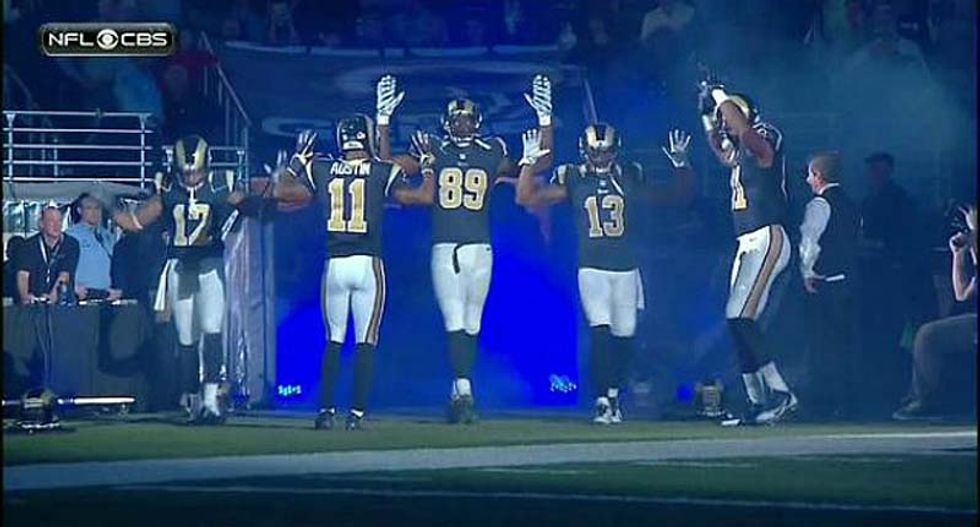 Reacting to five members of the St. Louis Rams coming onto the field for Sunday's game displaying the 'hands up, don't shoot' gesture, a St. Louis police officers fraternal organization is demanding the team discipline the players, and that the team and league issue a formal apology, reports KSDK.

Prior to player introductions before Sunday's game, five players — Stedman Bailey, Tavon Austin, Jared Cook, Chris Givens, and Kenny Britt — came out onto the field first with their hands in the air prior to being joined by their teammates.

Responding to the display, the statement reads, "The St. Louis Police Officers Association is profoundly disappointed with the members of the St. Louis Rams football team who chose to ignore the mountains of evidence released from the St. Louis County Grand Jury this week and engage in a display that police officers around the nation found tasteless, offensive and inflammatory."

"Five members of the Rams entered the field today exhibiting the "hands-up-don't-shoot" pose that has been adopted by protestors who accused Ferguson Police Officer Darren Wilson of murdering Michael Brown. The gesture has become synonymous with assertions that Michael Brown was innocent of any wrongdoing and attempting to surrender peacefully when Wilson, according to some now-discredited witnesses, gunned him down in cold blood."

While the gesture was first attributed to the shooting death of Brown by Ferguson police officer Darren Wilson, the display has grown as a symbolic gesture used in protests over multiple shootings of young black men by police officers.

In the statement, SLPOA Business Manager Jeff Roorda is quoted saying, "now that the evidence is in and Officer Wilson's account has been verified by physical and ballistic evidence as well as eye-witness testimony, which led the grand jury to conclude that no probable cause existed that Wilson engaged in any wrongdoing, it is unthinkable that hometown athletes would so publicly perpetuate a narrative that has been disproven over-and-over again."

The letter goes on call ".. for the players involved to be disciplined and for the Rams and the NFL to deliver a very public apology. "

Roorda said he would be reaching out to other police departments around the country, enlisting their aid in pressuring the team and the league.

Roorda warned, "I know that there are those that will say that these players are simply exercising their First Amendment rights. Well I've got news for people who think that way, cops have first amendment rights too, and we plan to exercise ours. I'd remind the NFL and their players that it is not the violent thugs burning down buildings that buy their advertiser's products. It's cops and the good people of St. Louis and other NFL towns that do. Somebody needs to throw a flag on this play. If it's not the NFL and the Rams, then it'll be cops and their supporters."

Although a Ferguson grand jury refused to indict Wilson, he and the Ferguson police department are still being investigated by the Justice Department and may face federal charges.