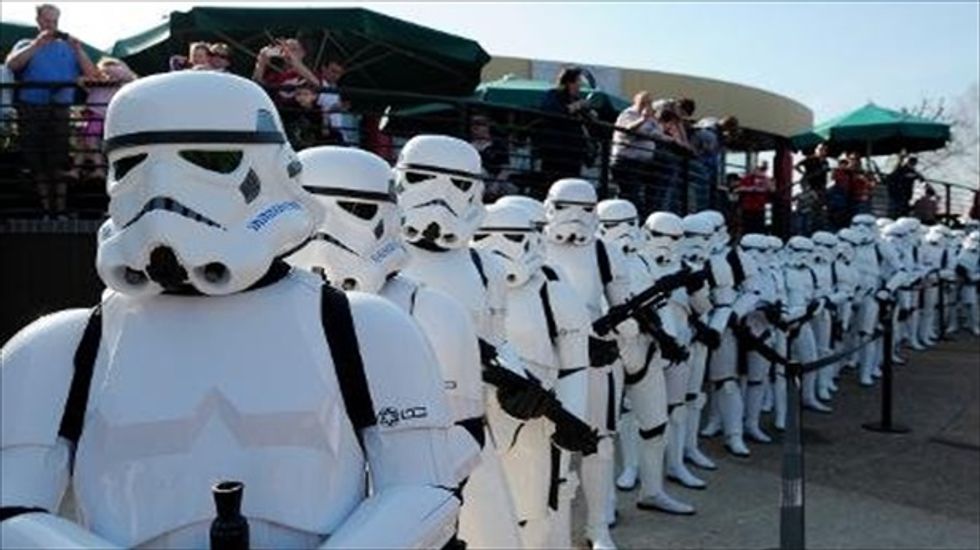 Star Wars Stormtroopers pose for photographers in a queue at Legoland in Windsor west of London on March 24, 2012. (AFP)

Star Wars fans were sent into a frenzy Thursday as studio giant Disney revealed the title of the iconic franchise's seventh episode -- The Force Awakens -- and said filming was over.

The Force Awakens immediately shot to the top of trending topics on Twitter after Walt Disney Pictures and the official Star Wars account released the much-anticipated title.

"Star Wars: The Force Awakens has completed principal photography," the tweets said, with the title set in the franchise's retro typeface in yellow and white against a background of stars.

The film will now require months of post-production before its worldwide release scheduled for Dec. 18, 2015.

It is directed by J.J. Abrams, one of Hollywood's A-list directors who recently oversaw the successful rebooting of the Star Trek franchise.

Speculation about what the title means centers on it being a follow-up to Return of the Jedi -- in which Luke Skywalker was left as the only known Jedi Knight holder of the Force, with no rivals from the "dark side" Sith camp.

Fan sites wonder if The Force Awakens refers to both the light side and dark side, Jedis and Siths.

"If you want to make Star Wars movies every year for the foreseeable future, you can’t just have one Jedi and no Sith, right?" asks a blogger at slashfilm.com.

"The Force Awakens likely refers to more people becoming one with the Force, on both the good side and Dark Side," he wrote.

Star Wars has attracted generations of loyal fans ever since the first film arrived in 1977 recounting the adventures of Skywalker, Han Solo and Darth Vader.

Filming began in Britain in May on Episode VII.

Filming on the new movie was not without hiccups: in June, the 72-year-old Ford broke his leg on the set when a garage door fell and hit him at Pinewood Studios outside London.

Ford is back as smuggler Solo, the 62-year-old Hamill will return as Jedi Knight Skywalker and Fisher, 57, reprises the role of Princess Leia.

The film is produced by Lucasfilm chief Kathleen Kennedy, Abrams, and Bryan Burk, while multiple Oscar-winner John Williams returns as the soundtrack composer.

The original 1977-83 trilogy -- Star Wars, The Empire Strikes Back and Return of the Jedi -- was followed by a prequel trilogy between 1999 and 2005: The Phantom Menace, Attack of the Clones and Revenge of the Sith.

With Star Wars, just as it has done with Marvel superheroes Iron Man and Captain America, Disney is able to appeal to a broader, older audience as well as children, expanding the company beyond the realm of Mickey Mouse and fairy tales.