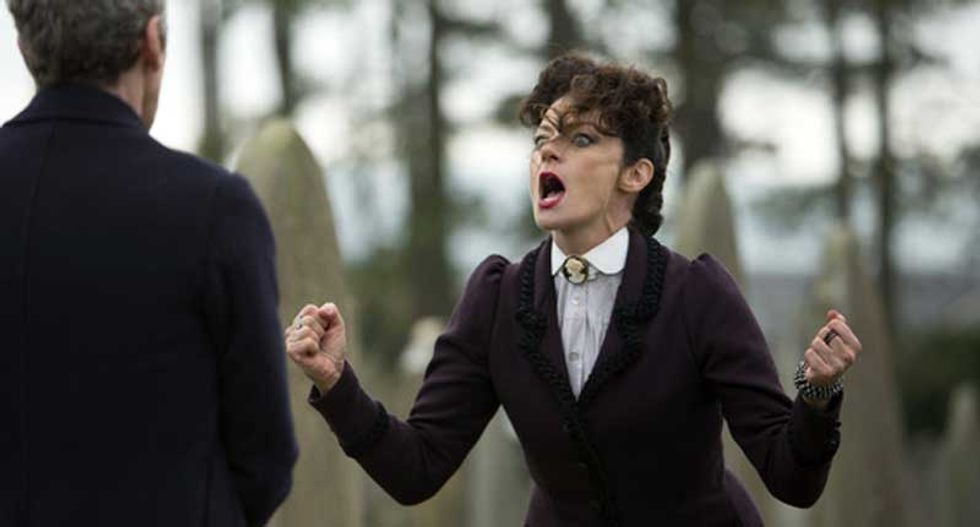 Don’t let those emotions get the better of you, Missy. (BBC/Adrian Rogers)

The eighth series of Doctor Who began by introducing a new Doctor, in the shape of Peter Capaldi. But now we’ve reached its end an even greater talking point is undoubtedly the recasting of the Time Lord’s arch enemy, the Master, as the Mistress.

After it was revealed in the penultimate episode who Missy, played by Michelle Gomez, really was (Missy – Mistress – Master, geddit?) the internet went wild about the idea that Time Lords can regenerate into Time Ladies, spawning further speculation as to the possibility of a lady Doctor. It has already been established that this sort of sex change regeneration is possible, thanks to a brief mention in Neil Gaiman’s episode The Doctor’s Wife, but few people had expected the Doctor’s nemesis to undergo such a high-profile gender swap.

Now we’ve seen how this all plays out, we can think about the Time Lord/Lady sex change more carefully. How did the Master’s transformation inflect (or not) the story that was told?

In some senses – and as might be expected for a “family” show – gender stereotypes were upheld to a T. Not only did the Master extravagantly and tauntingly kiss the Doctor in Dark Water, the penultimate episode, but the Doctor reciprocated in the finale Death in Heaven, albeit his being a kiss of gratitude. It’s hard to imagine Doctor-Master kissing being included in such a way between, say, John Simm and Peter Capaldi, and this strikes me as a scripting decision based squarely on Missy being a woman.

Hints of demented romance work in the same way. Where the Doctor-Master bromance was strongly but sub-textually present in the David Tennant era, Missy refers to the Doctor as her “boyfriend” when we first see her – and deliberately misquotes Casablanca at the Doctor. Twisted, epic romance rises to the surface of the show in these moments, but the presence of such material again hinges on the Doctor-Master relationship being visibly that of a male-female pairing. Nonetheless, director Rachel Talalay, who oddly goes unrecognised in The Guardian’s feminist reading, makes brilliant use of the camera, holding our attention on Michelle Gomez, Peter Capaldi and Jenna Coleman at vital moments.

And this version of the Master has a rather different agenda to earlier incarnations; this is a Master who’s obviously watched “new Who” and is fully on-board with the notion of having a more emotional logic to her motivations.

Or, put another way, it’s again rather unsurprising that a female Master might feel more, being driven less clearly by megalomania – however “bananas” and overtly psychotic she is. She wants, instead, her “friend back”. The Mistress even offers the Doctor a gift on his birthday, complete with performing a rendition of Marilyn Monroe’s infamous “Happy Birthday, Mr President”. Rather than competing over who will “win”, as we’re used to with the Master, Missy seemingly desires a recognition that she and the Doctor are “the same”. She wants some sense of reciprocity rather than macho rivalry.

As the Monroe pastiche makes clear, though, Missy’s emotional need is crafted as absolutely gendered. However tempting it may be to interpret a female Master as a positive step forward for the show’s gender representations – and as a step that brings a female Doctor ever nearer, it’s a move here that seems, in places, to draw on a very limited set of gendered incarnations and meanings.

In response one might suggest that the themes of childhood friendship and emotion are only contingently linked to the Master’s re-gendered regeneration. After all, mirrored hero-villain pairings are almost the default setting in contemporary popular culture.

And by focusing on the difference between gendered incarnations of the Master, we’re in danger of downplaying the difference at the centre of the finale, namely that between the Doctor and the Master. In many senses, Michelle Gomez’s superb performance as Missy is of a piece with John Simm’s: both versions are excessively unhinged. Missy is indeed “bananas”, and Gomez’s delightfully heightened performance style is one where she relishes the chance to bite her lip at opportune close-up moments, or to sway regressively and childishly from side to side when asking if the Doctor has any more friends she can “play with” (that is, kill). These exaggerated, stylised choices strike me as very much in tune with the show’s previous depiction of the Master.

The sex change is seemingly something written not as a matter of gender politics or progression, but instead as another part of Doctor Who’s unfolding – it offers a visible “twist”, whilst the underlying meanings of the hero-villain mirroring remain central. And it offers a new spin on the Master, even while drawing on very restricted gender codes and feeding off John Simm’s portrayal (where he was the prime minister, the Doctor now gets to be president). Focusing purely on a sex change regeneration means missing these powerful continuities.

Yes, there may well be a female Doctor in future. But for now it’s just a possibility to be teased and played with, as in the pre-credits sequence to the final episode and its altered title sequence (for the first few minutes of the finale it seems possible that Jenna Coleman is herself playing the Doctor).

Going forward, if I too was forced to throw my hat into the guessing ring I’d nominate Andrea Riseborough as a future Queen/King of Gallifrey. But when the title role ultimately undergoes a sex change then it will hopefully allow for a wider range of gender roles, going beyond equations of femininity and emotionality, as well as status quo codes of romance.

But those are different kinds, and orders, of hope. Getting a female Doctor, just like a female Master, could merely replay some of contemporary pop culture’s norms and codes. You never know what you’re going to get with regeneration… but you can make educated guesses, given the stark parameters of mainstream media.

Matt Hills does not work for, consult to, own shares in or receive funding from any company or organisation that would benefit from this article, and has no relevant affiliations.