Vandalism, insults and sex: A day in the life of a games designer 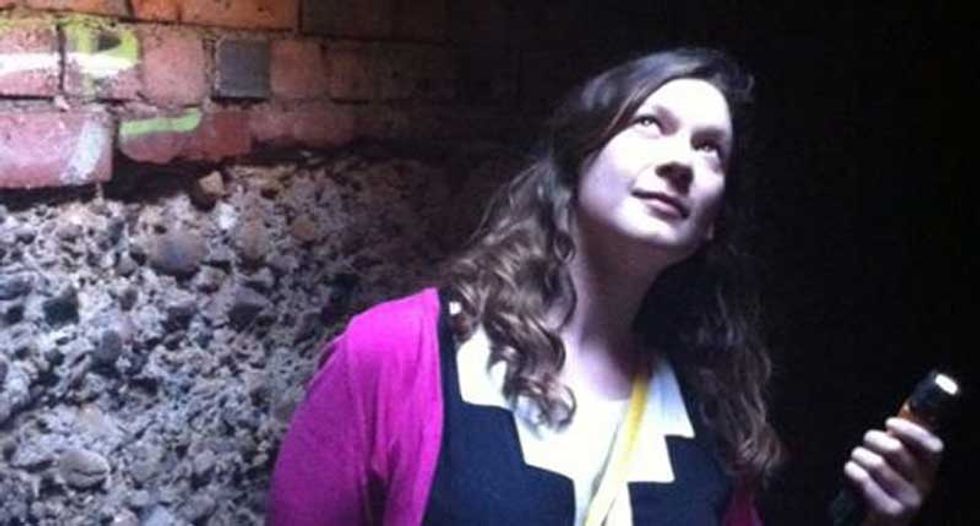 Holly Gramazio has a curious life, designing games that reflect human behaviour and intrigue her players. But is that really a proper job?

I’m a games designer, and I design games that are really annoying to describe. Games where people move around, games made with choreographers or artists or museums or city streets, for children or adults or both.

Last month, I worked mostly on Games for Places , a set of games for outdoor spaces, produced by Forma Arts, across East Durham. We designed five games for each of six different sites, and then stencilled them on the ground, along with all the other elements the games needed to work: Get from HERE to THERE, but only step on the paving stones with arrows painted on them, and always face the same way as the arrows. Walk your dog along this path we’ve painted with leaves, and get a point every time it steps on one - unless the leaf is yellow, in which case you lose.

The month before that I made a game called Hotel Room for the Playpublik festival in Kraków, Poland. Players enter a hotel room, as immaculate and untouched as you would expect, except for a computer on the desk showing an interactive story about the room.

Through the computer, players explore a digital version of the room which prompts them to do things in the real room as well: play small games, hide in cupboards, leave messages. It’s a game about how we behave in hotel rooms, and their role as somehow separate from ordinary life.

The games I make can be for one player on their own or thousands of screaming people in a public square. They can last for two minutes or two months. But they’re all made for a particular place, and they all ask players to interact with the physical world.

Having the initial idea is the easiest part. It’s just a matter of standing around in a place somewhere, looking around and saying: well, you know, what would be fun here? What would be interesting? What sort of thing do I want players to do?

The rest of it works backward from there - if I want the visual effect of people running through the streets with balloons, then they need balloons and a reason to get them somewhere fast. If I want people looking at columns or windows they’d perhaps never notice otherwise, then those columns and windows need a role in the game.

At this initial design stage the three big questions for me are: what do the players do? Why? And how do they find out what to do?

There are other questions, too: how (not if) people are going to try to cheat, for example. But those three are the core.

The “actually making the game” part is a lot harder, and it can get a bit nerve-wracking. In Games for Places, artist Hannah Sibai and I spent a day proving that our paint was removable by slathering it on a Grade II listed building in front of helpful but deeply dubious council representatives - and then waiting for it to dry so we could take it off again.

Later, during the installation itself, we found ourselves working into the night to make up for time lost to a rain storm. My role was to hold the biggest torch we could find and cheerfully explain to passers-by that we weren’t vandals, while Hannah did the actual work of kneeling on the pavement and touching up the stencils with cotton buds. We went through a lot of cotton buds.

Finally, once the game is ready, the players arrive - always the scariest part, and always when something unexpected happens.

In Hotel Room, people entered one or two at a time, and chose to do all sorts of things: scrawled threats on the mirror in lipstick, made a balloon flower, left notes, explored the minibar, stole an awful lot of soap. That was all pretty much what I’d expected.

Then one pair of players - a man and a woman - took a particularly long time, and a queue started building up. In the end I knocked at the door. The man answered it.

“Can I help you?” he asked, wide-eyed and very tall and very naked, while the woman stood behind him taking photos with an enormous camera. Well, fair enough, of course: it was a game about the strange things we do in hotel rooms, and they’d just played a bit harder than I was expecting. It’s a good problem to have.

When I talk at schools or conferences, the question I get most often is “is that really a job?”. Well, my closets are filled with ribbons and camo net and loops of red elastic, with lie-filled maps and a huge laminated stack of Anglo-Saxon insults and so many different multicoloured balls. So yes, it is. It’s a job that really exists, against all expectations, and it’s pretty great.

• Holly Gramazio is a freelance games designer based in London