Virginia man in Confederate flag flap stands by 'Go back to Africa!' outburst 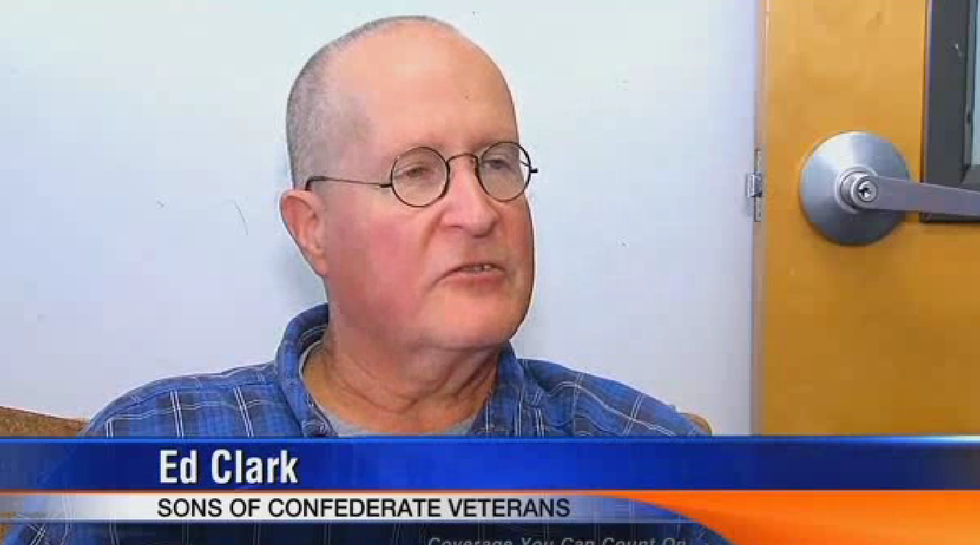 A Virginia man who shouted at black civil rights activists to "Go back to Africa!" in a dispute over slavery and the Confederate flag is standing by his statement.

According to WSET-TV Channel 13, Ed Clark of Pittsylvania, Virginia is a Second Lieutenant Commander of the Pittsylvania County Sons of Confederate Veterans and he believes that if activists are offended by emblems of slavery, then they should blame their own ancestors, who "sold you into slavery. Yes they did."

The two sides are at odds over a decision by the Danville Museum of Fine Arts and History to display the controversial flag outside the museum as part of a monument to the Civil War dead. Rights groups pointed out that for nonwhites in the south, the flag has violent, racist connotations.

Rev. Avon Keen, president of the Danville/Pittsylvania County chapter of the Southern Christian Leadership Conference and other civil rights leaders held a press conference to explain why they'd like to see the flag portion of the monument relocated. Flying the flag, they said, harms the area's reputation and economic prospects.

“The African- American community has patiently stood by this flag flying here, and now it’s time for it to come down,” said Keen on Monday.

The press conference was disrupted by a man now identified as Clark, who said, “Then you need to go back to Africa!”

Channel 13 spoke to Clark, who says that Africans who captured and sold other Africans were the real villains of the U.S. slave trade. The European whites who bought and sold the human plunder were just doing business.

Regarding his remarks at the press conference, Clark said, "I told him, I said, if you're so concerned you need to go back to Africa to go over there and see how slavery is being practiced today. I ain't apologizing."

The American South, he said, was not the sole bastion of slavery in the world. He went on to say that he doesn't care if anyone was offended by his statements earlier in the week.

"I'm not surprised at those types of statements being made," said Rev. Keen. "As I said earlier because of the way the ideology of anyone that is supportive of the Confederacy it's just as offensive as the flag."

According to world historians like Dr. Molefi Kete Asante, attempts by conservative ideologues to blame slavery on Africans are factually incorrect and motivated only by an urge to offset blame for one of the great atrocities committed by Europeans against Africans and other native peoples during the colonial era.

"There are some fundamental facts," Asante wrote. "First, no African kingdom used slavery as its principal mode of production. Africa has produced no economies based on slavery. It was left to Europe to create a system of slavery where humans were chattel to be used as tools in the development of wealth."

"Secondly," he said, "in all massive enterprises where there are oppressors and the oppressed there will be collaborators."

But, when you examine the historical record and see who actually profited from the slave trade and to whom the benefits of its money and labor really flowed, "what one cannot accept is that Africans were equally culpable for the slave trade."