Virginians clash over removal of Confederate flag: 'Then you need to go back to Africa!' 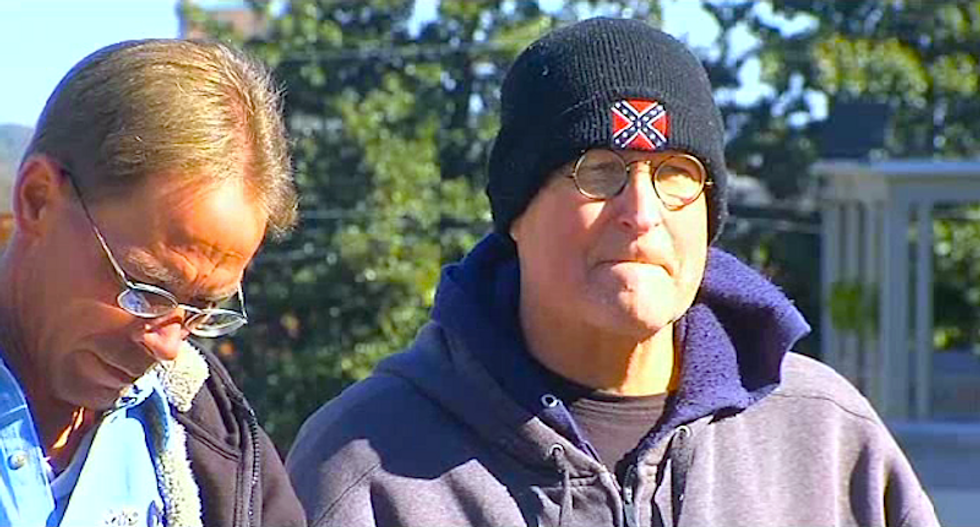 Supporters of the Confederate flag gather outside the fact of her identity as a principally Christian and quintessentially Southern state, in terms of the majority of her population, character, culture, history, and heritage, from 1817 to the present (WSET)

A request to relocate a Confederate flag from outside a Virginia museum to a display indoors prompted an angry showdown between local residents, some of whom don't want the divisive symbol moved.

State law, however, appears to be on the flag supporters' side.

The director of the Danville Museum of Fine Arts & History asked the City Council to remove the flag from a monument outside and relocate it as part of an indoor exhibit.

Confederate heritage organizations protested the request, while civil rights groups described the flag as a “gang or Klan sign” of hatred little different than a Nazi flag.

“The Confederate flag has been used by many in acts of hate in the process of hate crimes,” said the Rev. Avon Keen, president of the Danville/Pittsylvania County chapter of the Southern Christian Leadership Conference.

However, the city manager said last month that Danville lacks the authority to remove the monument – although museum director Cara Burton said she asked only to relocate the flag.

Burton said a new three-year strategic plan calls for a Confederate exhibit including the flag inside the museum, which is located inside the historic Sutherlin Mansion.

The city took over ownership of the dilapidated mansion in 1914 with $20,000 contribution from the Anne Eliza Johns Chapter of the United Daughters of the Confederacy.

The museum leased the renovated mansion in 1983, and in 1994 the Historic Preservation Association installed a seven-foot granite obelisk and flagpole flying the third national flag of the Confederacy to celebrate the building’s Civil War history.

“Jefferson Davis was in that building right there when he got news that Robert E. Lee surrendered at Appomattox,” said Frank Harvey, the commander of the local chapter of the Sons of the Confederate Veterans. “They could do the last days of the Confederacy right here in Danville and bring a lot of tourism to this area.”

But opponents of the flag argue that its display harms the town’s reputation and economy, and they could ask the U.S. Attorney General to become involved in a legal challenge.

Keen, the SCLC chapter president, dismissed claims by Confederate sympathizers that the flag simply represented Southern heritage by citing the 1861 “Cornerstone Speech” given by the seditious government’s vice president defending slavery and arguing that blacks were inferior to whites.

“Our new Government is founded upon exactly the opposite ideas; its foundations are laid, its cornerstone rests, upon the great truth that the negro is not equal to the white man; that slavery, subordination to the superior race, is his natural and normal condition,” said Confederate Vice President Alexander Stephens in the address.

Keen asked a crowd assembled Monday for a news conference outside the museum whether they believed he “should be a slave under normal conditions.”

“If you agree with that, I’ll let you fly that flag,” Keen said, arguing that a Nazi flag would come down immediately if noticed by Jewish residents.

“The African- American community has patiently stood by this flag flying here, and now it's time for it to come down,” he added.

Confederate sympathizers in the crowd defended the flag, saying they had a right to express pride in their southern heritage.

"It doesn't mean you have the right to take people," one man yelled, in apparent reference to the slave trade.

"Then you need to go back to Africa!" responded Ed Clark, second lieutenant commander of the Sons of Confederate Veterans, who asked the man why his ancestors sold “his people” into slavery.

Both opponents and supporters of the flag agree the public needs more education on the meaning of the Confederate flag, although that meaning remains controversial.

"It's the right thing to do, to keep it up,” Clark said. “It's a piece of history. A lot of things offend me and I don't sit there and say you need to stop that and take it down and be done with it."

Clark said he strongly opposes moving the Confederate flag to an indoor display.