We’re all conspiracy theorists now – even our shapeshifting lizard overlords 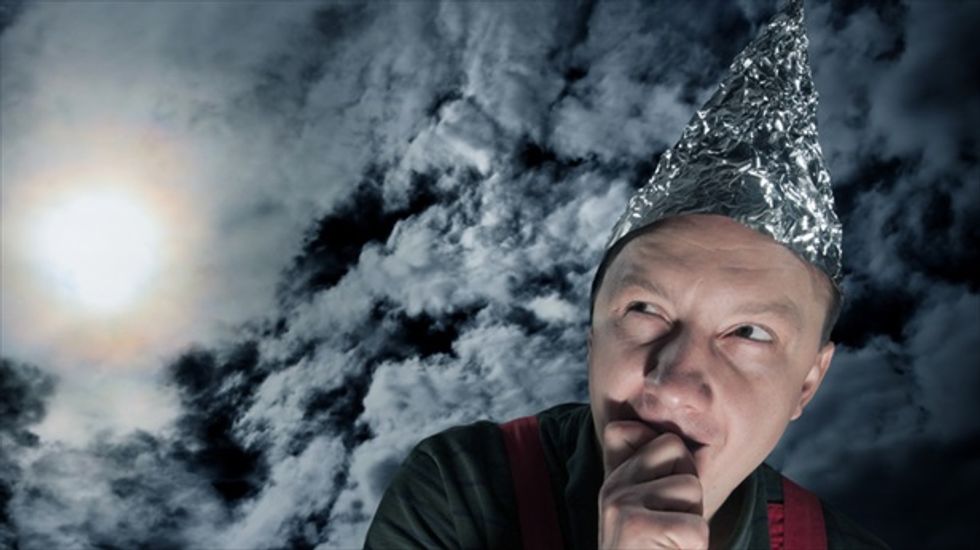 While it’s tempting to dismiss conspiracy theorists as nothing more than a loopy minority, on a growing range of contemporary issues they in fact make up a loud and vocal majority.

Consider the nearly four in five US citizens who think the government is keeping mum on salacious information about UFOs. Or the quarter of the UK population who believe Princess Diana was assassinated.

Then there’s the American political group Reptilian Resistance (RR) Movement United. Alongside its mostly unexceptional conservative social activist agenda is a violent declaration of war against the evil, reptilian-alien hybrids that have supposedly infiltrated the most senior levels of government.

But what is most surprising about RR is not its bizarre claim that we are in the midst of an invasion by evil über lizards, but that the claim has gained so much traction and generated so much comment in the public sphere.

In early 2013, RR received international media coverage upon posting what it claimed was high-definition video proof that one of President Barack Obama’s security attaché was a shape-shifting alien humanoid.

Even the White House saw fit to make comment. In an interview with Wired magazine, Caitlin Hayden from the National Security Council confessed that alien bodyguards were too pricey in an era of budgetary cut-backs:

I can’t confirm the claims made in this video, but any alleged program to guard the president with aliens or robots would likely have to be scaled back or eliminated in the sequester. I’d refer you to the Secret Service or Area 51 for more details.

Although Hayden’s (hopefully non-reptilian) tongue was likely planted firmly in her cheek, we think an invasion is indeed under way: not of politically ambitious reptiles, but of conspiracy theory discourse.

This discourse falls into two categories:

1) Claims, like those of RR, that nefarious forces are conspiring to do us harm

2) Claims that dress down the producers of the aforementioned claims for being conspiracy theorists.

In our view, though for different reasons, both categories of discourse are potentially problematic.

Some instances of the first type of discourse – the Kennedy assassination was a cover-up, 9/11 was an inside job, Obama is a crypto Muslim, etcetera – are decidedly socio-political.

Others are harder to classify: the Wingdings font contains “kill kill” messages, dentists are slipping microwaves into our teeth, Kentucky Fried Chicken is part of a Ku Klux Klan plot to render black men impotent, and so on.

Take lecturer in critical thinking Peter Ellerton, who asserted recently on The Conversation that anyone who denies the science of climate change is – ipso facto – a conspiracy theorist. He goes on to argue more generally that conspiracy theorists reject science and are irrational and deluded.

While we think Ellerton makes useful observations about the foundations of conspiracy thinking and the difficulties of toppling the “ironclad logic” of conspiracy theories, our views diverge from his in several ways. Not because we doubt the validity of climate change science – we think the science is eminently solid – but because of the unhelpful way he uses the term “conspiracy theories”.

After all, someone could doubt the science of climate change on numerous non-conspiracy-theory-related grounds. For instance, they might understand science poorly, they might be one of the (very, very) few scientists who assesses the data differently to the consensus, and so on.

Is climate change denial a conspiracy by Big Business?

Furthermore, many environmental activists who support climate change science could also be described as subscribers to various “conspiracy theories”: that Big Business has engaged in secret strategies to deny climate change and that Big Media is manipulating coverage are just two examples. And we are not entitled to counter that these aren’t “conspiracy theories” simply because they are or will one day be revealed to be true.

To call our own conspiracy-related beliefs “truths”, but yet to dub those of our interlocutors “conspiracy theories”, is at best a facetious form of rebranding, if not an instance of begging the question against those with whom we do not see eye to eye.

As an antidote we could remind ourselves that the conventional account of the 9/11 attack is a conspiracy theory – about terrorists who secretly conspired to carry out coordinated attacks on New York and Washington – even though it usually isn’t labelled as such.

Ellerton seems to be trying to discredit climate change sceptics by foisting an appellation upon them which most would find embarrassing. Calling someone a “conspiracy theorist” is not a neutral naming act given the term’s association with paranoia, crazy thinking and tin-foil hat fashions.

But, as mentioned above, conspiracy thinking can be found in staggeringly large percentages of the population.

The non-partisan nature of conspiracy theories

While common wisdom has it that conspiracy theory is generated almost exclusively by those on the political right, this is not a cognitive or explanatory style peculiar to any political allegiance: conspiracy narratives draw numerous advocates on all sides of politics, and among both progressive and conservative social groups.

Given the threat the “birther” campaign has posed to the American Democrats, for instance, it is interesting that original allegations about Obama’s citizenship were raised by anonymous Hillary Clinton supporters during the presidential primaries in spring 2008.

The ‘birther’ campaign was a conspiracy theory that Mr Obama, whose father was from Kenya, was not born in the US and is not eligible to be president.

These observations are not meant to suggest party-political affiliations are completely irrelevant when considering conspiracy theories. In 2013, Public Policy Polling showed that while only 12% of those Americans who voted Democrat thought that global warming was a hoax, the figure was 61% among those who voted Republican.

On the other hand, more Democrats believed that the US government allowed 9/11 to happen, that the CIA circulates crack to the inner cities, and that the moon landing was faked. (The issue of alien existence was evenly divided.)

The lesson here is not so much that belonging to a particular voting public makes one susceptible to conspiracy theory, but that it tends to predict which conspiracies one will find appealing.

The ‘rightness’ of conspiracy theories

Elsewhere we have examined in greater detail the attractions of, explanations for and ramifications of the extraordinarily large number of conspiracy theories currently circulating in public discourse.

Here, we simply wish to emphasise that to better understand conspiracy thinking we would do well to think twice before shouting “conspiracy theorist!” at those whose beliefs and explanations (conspiracist or otherwise) do not align with our own.

Name-calling such as this has the potential to mute the expression of people’s genuine worries and also promotes a stand-off – or mimetic escalation of antagonism – between debating parties rather than encouraging inquiry and dialogue.

The mainstreaming of conspiracy theory in public discourse is not simply a matter of wacky content but of an epistemological orientation whose signal characteristics include doubt, scepticism and DIY inquiry.

Despite the outlandish propositional content of many conspiracy theories, there is a reasonableness – even a rightness – to some aspects of conspiracists’ modes of reasoning. One might even describe it as an idiosyncratic continuation of – rather than a rupture from – the ideals of rationality associated with the Enlightenment.

As such, the inconvenient truth in this particular scenario is that what is often categorised as “conspiracy theory” is not simply the pastime of reptilian resistors rehearsing the apocalypse. Rather, it is much closer to what, in other contexts, we would simply call “political rhetoric”.

Whether or not that is a cause for concern depends on our view of what political discussion should involve. At the very least, it should worry our lizard overlords.

By Emma A. Jane and Chris Fleming, University of Western Sydney

Modern Conspiracy: The Importance of Being Paranoid (2014) by Emma A. Jane and Chris Fleming is published by Bloomsbury.