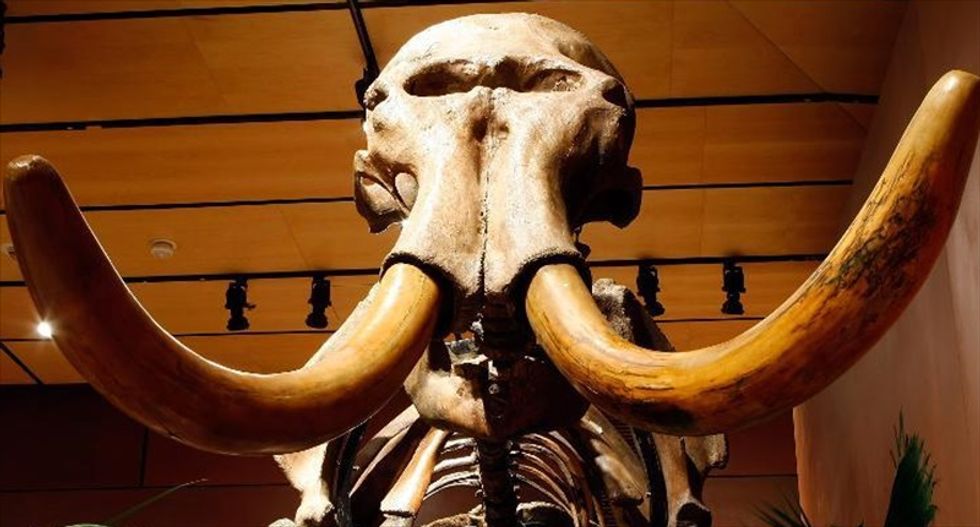 The 5.5-metre (18 ft) long skeleton made up of more than 150 bones lay in pieces for decades but was reassembled for display at an auction house in Billingshurst, southern England.

Complete with curved tusks, it is thought to be from a male of the now extinct species, which may have weighed up to six tons in its lifetime, up to 50,000 years ago.

Nicknamed "Monty" by auctioneers, the piece was sold by Summers Place Auctions to a British-based private collector in a telephone bid.

A Summers Place spokesman said the fur-covered mammoth would have roamed the steppe stretching across northern Eurasia and North America. The species has been extinct for around 10,000 years.

"Its diet was mainly grass and sedges, which explains why it only had four molar teeth, and also stunning long, curved tusks," the spokesman said.

"The woolly mammoth co-existed with early humans, who hunted them for food and used its bones and tusks for making art, which also explains why complete skeletons are so rare."

Other items on auction included the skeleton of a Moa, an emu-like bird common in New Zealand around 1,000 years ago, and an Elephant Bird egg more than one foot (30cm) long.

The eggs of the Madagascan bird -- extinct for around 500 years -- are the largest ever recorded, bigger than any known dinosaur egg, according to the auction house.

Errol Fuller, curator of the Second Evolution sale, said: "We have managed to assemble some of the best examples in this field and it's a great opportunity to see them all together."