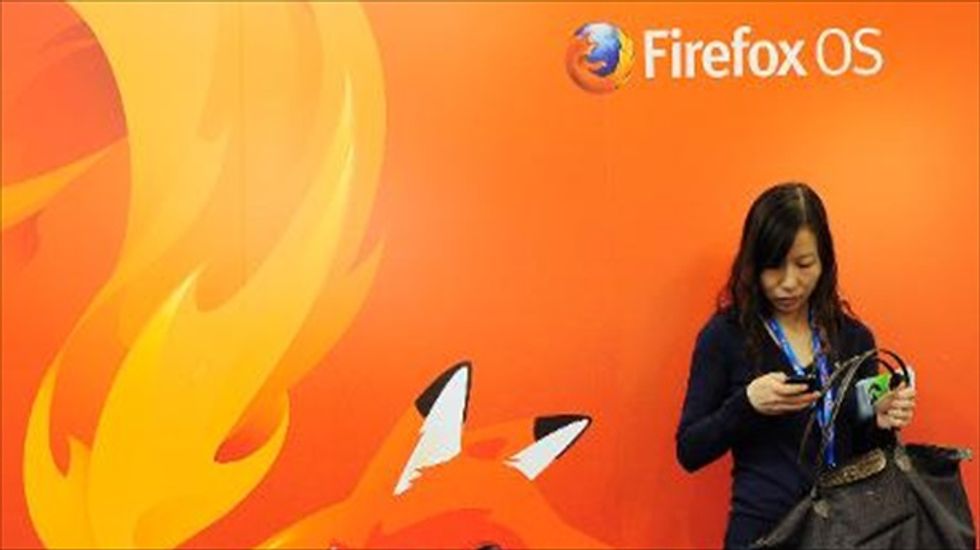 A woman looks at her mobile phone as she stands in front of a poster of Mozilla Firefox on Feb. 27, 2013 at the Mobile World Congress in Barcelona [AFP]

The deal between the two companies will start in December and is set to last five years, Yahoo said. Mayer would not disclose the financial terms other than to say that the partnership is a revenue sharing agreement and includes certain "guarantees."

The partnership, which integrates Yahoo search into Firefox's browser for desktop PCs and mobile devices such as smartphones, will produce a "share gain" for Yahoo, Mayer said in an interview with Reuters on Wednesday.

The Mozilla deal means that users of the Firefox browser in the U.S. will automatically be routed to search results on Yahoo's website when they type a query into the small box that appears at the top of the browser.

"It's one of the largest independently-directed search share opportunities available in the market," Mayer said, declining to estimate how much of a boost Yahoo expected to receive from the deal.

Yahoo's share of the U.S. search market on desktop PCs is currently about 10 percent, according to industry research firm comScore, compared to Microsoft's roughly 20 percent and Google's 67 percent.

Google previously served as the default search option for users of the Firefox Web browser on an international basis. With Google's three-year deal coming to an end, Mozilla has struck deals with several search engines in different regions, including Baidu Inc in China and Yandex NV in Russia.

Yahoo said it has revamped the look of its search engine, making more use of rich graphics and photos, for the Firefox partnership. The Web search results will continue to be powered by Microsoft, in keeping with the 10-year partnership that Yahoo and Microsoft began in 2010.

Firefox had 10.4 percent of the U.S. browser market on desktop PCs, mobile smartphones and tablets last month, according to tech data firm StatCounter. Google's Chrome browser was the leader with 33.5 percent.

Yahoo shares were up 1 percent at $51.10 in extended trading on Wednesday.