A Christmas Miracle: Watch as Utah police surprise motorists with cash instead of tickets 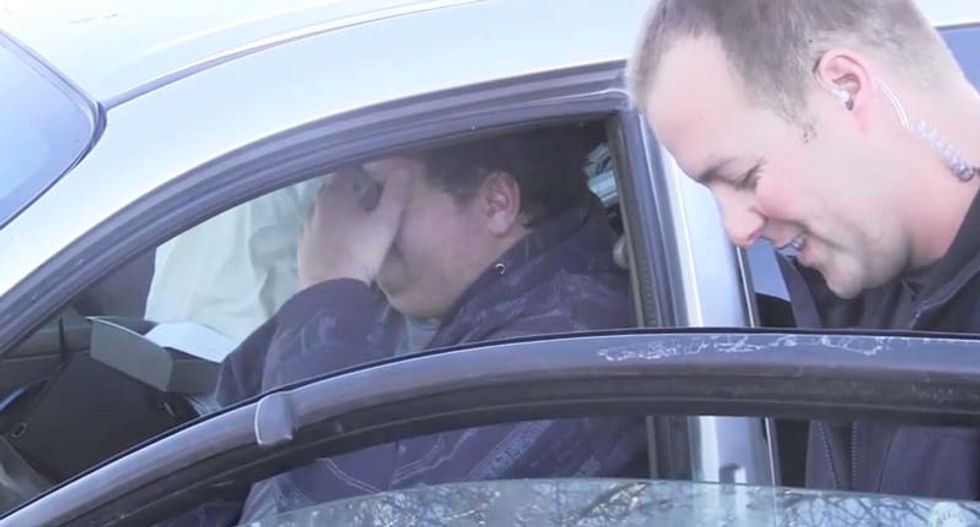 Motorists pulled over for minor traffic infractions in Enoch, Utah, were on the receiving end of a Christmas miracle this holiday season as officers handed them $100 for shopping instead of a ticket, reports the St. George News.

Six months ago the Enoch Police Department received a large donation of cash which they set aside, Enoch Police Sgt. Mike Berg explained.

“Then we had another gentleman just walk in off of the street last Tuesday,” Berg said, “and he gave the Police Department a $100 bill and he said, ‘I just want you guys to use this for someone in your community …. So, we decided that now was a good time – people can always use a little extra cash before Christmas and it’s not very often that we get to serve our community in that capacity.”

According to Berg, each motorist they pulled over was stopped for a legitimate reason, such as speeding, failure to use a turn signal, or running a stop sign.

“None of these were huge violations,” he said, “but they actually were legitimate traffic stops.”

Instead of handing out tickets, officers explained why they had been pulled over before handing over $100 to the startled driver, telling them to use it for the holidays.

One motorist seemed stunned in the video, muttering to himself before bursting into tears, while others beamed and thanked the officers.

Alicia Holland, the the wife of one recipient,expressed her gratitude on social media, writing, "A big thank you to the police that ‘pulled over’ my husband on Minersville Hwy. He has been having a really bad night and morning, and the ‘gift’ you gave us will definitely make it a special Christmas."

“Ninety-nine percent of our job is stressful, it’s full of emotion, and it’s difficult,” Berg said. "This 1 percent today – this two hours that we spent serving the community, or serving the citizens – can completely refresh me for the next year.”

Watch the video uploaded to YouTube by Melinda Berg  :