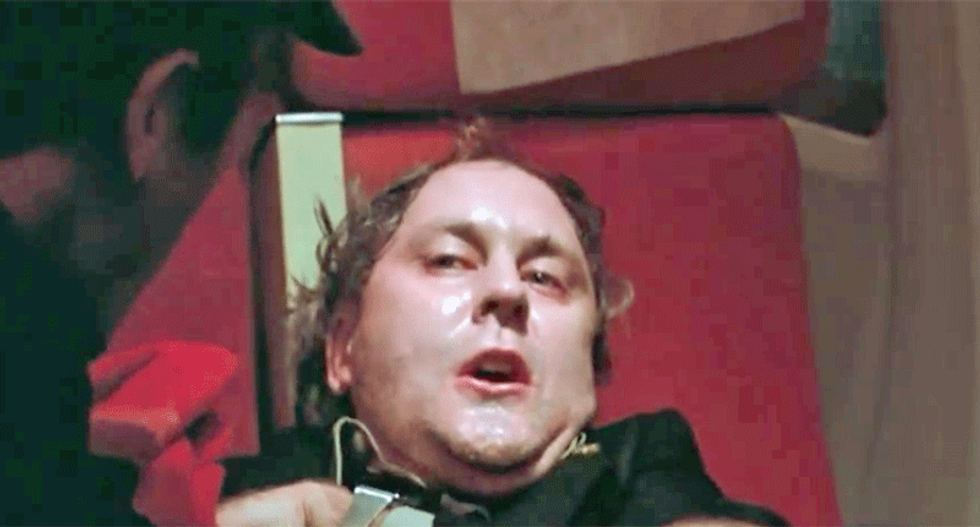 Screenshot of John Lithgow in "Twilight Zone: The Movie"

People do disgusting and disruptive things on airplanes. They show little regard or patience for fellow passengers and their needs. Inconsiderate behavior on the part of passengers can make air travel an unpleasant hassle for everyone. The 2014 annual Expedia Airplane Etiquette Study ranked the top on-board etiquette violators as reported by passengers:

The IATA received more than 8,000 complaints of unruly passengers in 2013. Is it any wonder air rage is on the upswing?

Consider that up to 16 million Americans may have Intermittent Explosive Disorder, which causes them lash out inappropriately at people and things – and that’s when they’re nowhere near an airport. The Federal Aviation Administration defines air rage as a passenger’s explosive and unpredictable behavior occasioned by congested travel, unexpected delays, or negative interactions with other passengers and flight personnel. From this point of view, the list of etiquette violators doesn’t really fall within the air rage definition. But from a psychological point of view, the story is different.

What safety and health officials call “explosive air rage” spills out into the public sphere for everyone to witness; these are the verbal attacks on passengers and personnel by someone yelling profanities, threats, complaints, and insults. “Mental air rage,” on the other hand, is emotional and private. Most people try to suppress mental air rage and prevent it from showing publicly for various reasons including fear, embarrassment, rational self control or compassion. It’s psychologically very real even though it’s far less visible than its explosive counterpart.

Mental air rage is just one aspect of the stressed out feelings that go along with the uncertainties and negative emotions of travel and transportation. This charged negative emotional background exists below the surface of consciousness and can lead to a simmering feeling of resentment throughout the travel experience.

So it’s not just “that guy” who could blow up at an airline employee when his plane is delayed yet again. Any traveler faces a real risk that at an unpredictable moment the silent air rage simmering below the surface may spring out suddenly as full-blown explosive air rage.

Crowded conditions and lack of information crank up tensions for passengers while they’re still on the ground.

Changes for the worse in passenger environment

Airlines contribute to harsh and unfriendly traveling conditions when their economic policies create an artificial climate of scarcity, competition and enmity among passengers.

The list of contributors to the deteriorating environment for airline passengers is a familiar one. Airlines have reduced legroom and seat width. Checked bag fees encourage passengers to bring more and more on board, leading to battles over limited storage space. The elimination of in-flight meals causes passengers to bring their own odorous food. Policies on personal electronic devices are unclear and inconsistently enforced. Bottomline, the cabins are overloaded.

All of these factors increase the mental load on travelers. From there it’s a small step for inconsiderate actions to trigger negative and anti-social behaviors in waiting rooms, airplanes and lavatories. For instance, entering a lavatory on board an airplane and finding it in a disgusting used condition creates an emotional and psychological shock. We are not only repelled and annoyed, but we also feel aggressed against. This stressful situation can ratchet up the mental air rage.

How to peacefully prevent air rage

Maybe your next flight they’ll really roll out the red carpet….

To reduce the unpleasantness of travel and the likelihood of air rage, passengers can bring things along to take care of their own comfort – reading materials, climate appropriate clothing, snacks, games and so on. Chatty passengers can form a mini-support group with one or more fellow travelers, sharing and consulting with each other on whatever travel problems are encountered. This tactic can help defuse stressful situations that could otherwise escalate. Even just having alternate scenarios worked out in case you don’t arrive when expected can minimize mental air rage.

My research suggests some ways airlines can help prevent these incidents as well, via more enlightened crowd management techniques:

Airlines should train employees in techniques that can prevent air rage incidents in the first place as well as how safely to de-escalate episodes once they’ve begun. After all, air rage isn’t just another unpleasant aspect of traveling – it can put everyone onboard at risk.

By Leon James, University of Hawaii